Filecoin price firm as the production FIL decreases by almost half

The Distributed Storage Office of China’s Communications Industry Association warned that Chinese companies are employing the “distributed file storage protocol Filecoin to issue unauthorized wealth management products and conduct illegal financing,” according to Technode. To halt the illegal activity, China is set to introduce a new regulation defining illegal fundraising beginning on May 1.

Turning back to the charts, the FIL topside trend line currently at $160.60 is critical to the bullish thesis. A failure to hold would introduce significant losses for the altcoin.

The April correction unfolded in A-B-C corrective formation for the ‘glass half full’ speculators, adding merit to the bullish thesis.

The developing breakout from the head-and-shoulders bottom has the potential to retest the all-time high at $237.73, representing a 28% gain from the neckline. A more aggressive target is the 138.2% Fibonacci extension of the April correction at $276.74. 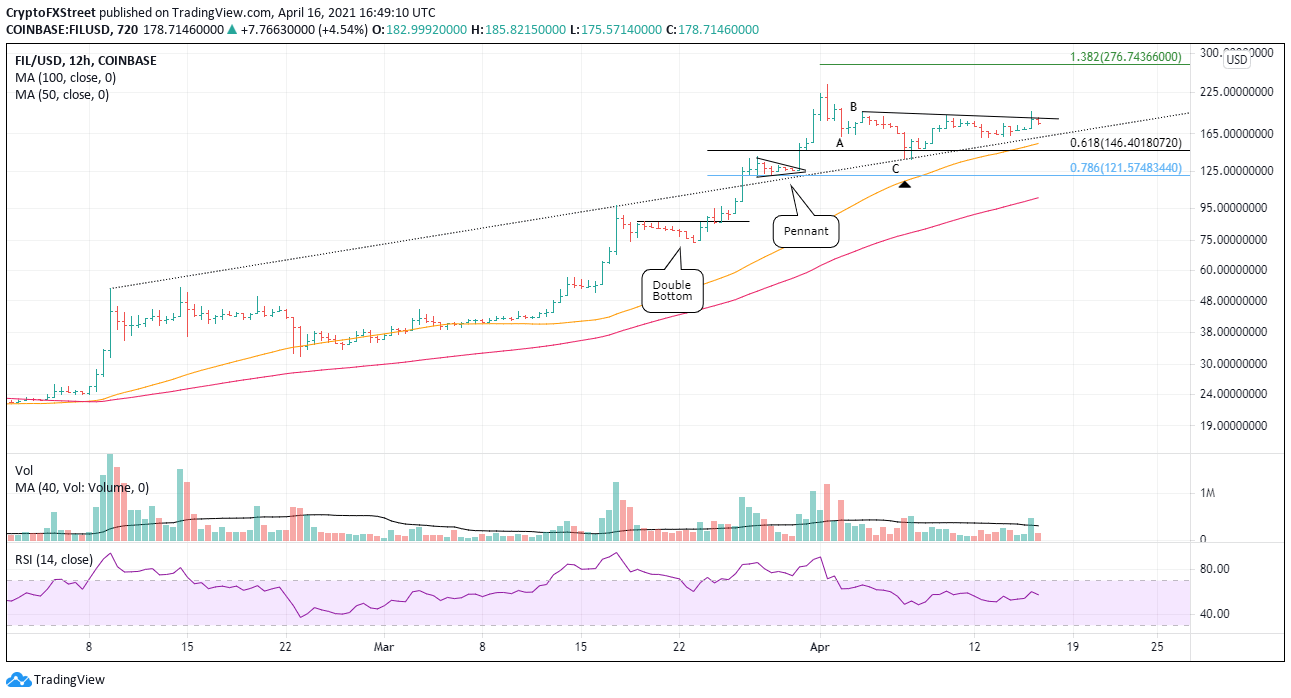 As mentioned earlier, the topside trend line is the line in the sand for the working thesis. A break below on a daily closing basis will raise the urgency for traders to prepare for a test of the 50-day simple moving average (SMA) at $153.80, followed immediately by the 61.8% retracement of the advance from the double bottom at $146.40.

The next level of support is the 78.6% retracement level at $121.57, which intersects with the lows of the pennant pattern in late March.

Filecoin price illustrating a new head-and-shoulders bottom on the 12-hour chart. FIL decentralizing the data storage industry by allowing users to share idle bandwidth. Daily Relative Strength Index (RSI) is no longer overbought, removing technical obstacle. Filecoin price retest of the topside trend line on April 7 has evolved into a head-and-shoulders bottom pattern that is triggering today on a burst of volume. As long as price remains above the topside trend line, the working thesis projects higher prices moving forward. Filecoin price firm as the production FIL decreases by almost half The Distributed Storage Office of China's Communications Industry…