In our FOMC preview we see the U Federal Reserve edging closer to starting to lower its asset purchases from the current $120 billion a month. Exactly when that will begin is the question, and how to communicate that without upsetting the markets, which are already jumpy.

Indeed, the markets have woken up with a headache Monday. In China, trouble in the real estate sector, where property developer Evergrande is facing a cash crunch has sent a shudder through equity markets. The company has debts of $300 billion.

Elsewhere, inflation is looking less and less transitory as gas prices spike across the globe (although commodity prices from iron ore to crude and copper are falling today) and in the US yields on the 10-year Treasury were up 2.7% to 1.37 at the end of last week but are slipping this morning, off 3 basis points. German and UK bond yields are lower too.

This could be a busy week for forex day trading – read our guide before you jump in.

Not surprisingly, then, the equity markets are taking the mounting bad news as a risk-off signal. S&P500 futures are down 1.5%, with the index in danger of closing under the key 50-day moving average level for two consecutive sessions – the first time in 218 days.

If you are looking for the best forex broker for your trading needs in this volatile climate, check out our guide.

Dollar index strengthening before FOMC at 93.33

The dollar index (DXY) is climbing – up 0.3% – both on expected monetary tightening but also with safe haven buying kicking in, suggesting that the debt-ceiling budget problem in the US may not have been been fully factored in by the market – or the market assumes that politicians will eventually come to a compromise that allows the ceiling to be raised.

Treasury Secretary Janet Yellen is warning of “economic catastrophe” if Senate minority leader, Republican Mitch McConnell, follows through on his threat to vote against raising the ceiling.

US yields have been trending lower since April despite rising inflation but that trend may now be reversing as market participants are arguably shocked out of their complacency. However, safe haven bond buying is pushing yields lower today, for now.

US inflation figures came in softer than expected last week, falling to 5.3% year on year from 5.4%. However, hopes that the data indicates that heightened inflation is indeed a temporary blip is probably wishful thinking when a closer view of the numbers is dissected. Core inflation (including food end energy) and other sticky elements of the basket of prices will keep prices moving higher.

Add to all of the above the negative impact of the Delta variant on the progress of the global economic recovery and the difficulties in formulating monetary policy faced by the voting members of the Federal Open Market Committee are mounting.

And let’s not forget that consumer sentiment also came in weaker than expected last week, as the pandemic’s resurgence in the US eats into confidence.

How to signal tapering without panicking market?

But the key issue facing the FOMC is how to signal to the market that tapering will begin soon, without triggering a taper tantrum in the markets – the equity markets in particular.

So what should we expect from Wednesday’s FOMC meeting and Powell’s speech on Friday?

Economists poled by Bloomberg think that there will be a formal announcement in November but hints will be dropped this week to that effect.

But in the last meeting policymakers policymakers were at pains to emphasise that the timing of tapering and interest rates were not connected.  That’s not a convincing posture to attempt to maintain although it does have the virtue of suggesting that even when tapering begins at the end of the year or early next, it doesn’t necessarily mean interest rate lift off is imminent.

Analysts at ING think the Fed could signal that tapering could start at the end of this year, as they see growth as still on track despite the headwinds mentioned above. They also expect not change in the Fed fund target rate either.

However, the economy was not so great that the taper had to be brought forwards as a number of FOMC such as Jim Bullard of the St Lous Fed seemed to be suggesting recently. Similarly to the Bloomberg economists, they expect there to a November announcement on tapering.

“For now, the most we can expect is cautious optimism in the statement with a bit more explicit support for tapering this year from Jerome Powell’s press conference. We also expect to hear it emphasised that this decision is completely separate from any decision to hike rates – there is no automatic path to higher interest rates,” wrote ING analysts James Knightley, Padhraic Garvey and Chris Turner in a note last week.

Powell also has his job to worry about, as President Biden has still not decided on whether he will appoint a new Fed chair.

Such personal matters aside, there’s also what other central banks might do, in terms of how policy is, or is not, coordinated between policymakers around the world. The UK and Brazil are among a number of countries where central banks are making interest rate decisions and holding meetings. The UK’s interest rates will stay unchanged but Brazil’s will in all probability continue to riser.

But even if the Bank of England does nothing on rates or asset purchases, the concerns about inflation, which rose to 3.2% year on year and saw its largest ever monthly increase since records began, are growing markedly. Additionally, the ECB last week signalled the start of tapering, which adds to pressure on the BoE but also too to a lesser degree on the Fed.

With producer price inflation showing every indication that it will prove to be more than transitory the Bank of England is in a place where it may be forced to raise interest rates much sooner than hitherto expected, argues Hargreaves Lansdown’s Susannah Streeter. If elevated inflation  looks increasingly like it is not transitory then “more members may move quickly to vote for a rate rise sooner than expected next year, but it would be an unpopular course of action with looming tax rises already hard to digest for many consumers”.

The Fed might soon also find itself in this unenviable position, although it has more room to manoeuvre on interest rate timings. 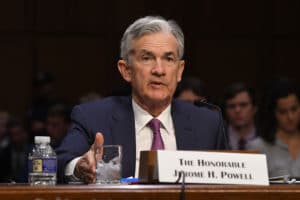 Ripple dips to $1.0390 amid descending triangle: when to buy the dip?

In our FOMC preview we see the U Federal Reserve edging closer to starting to lower its asset purchases from the current $120 billion a month. Exactly when that will begin is the question, and how to communicate that without upsetting the markets, which are already jumpy. Indeed, the markets have woken up with a headache Monday. In China, trouble in the real estate sector, where property developer Evergrande is facing a cash crunch has sent a shudder through equity markets. The company has debts of $300 billion. Elsewhere, inflation is looking less and less transitory as gas prices spike…