Home » Four bullish catalysts that may send Bitcoin above $50,000

Four bullish catalysts that may send Bitcoin above $50,000

Bitcoin (BTC) is changing hands at $10,630, mostly unchanged both on a day-to-day basis and since the beginning of the day. The flagship cryptocurrency recovered from the recent low of $10,135, but the upside momentum faded away on approach to the local resistance created by $11,000.

Receding volatility and little price action may be frustrating for BTC traders, but the hardcore HODLers keep calm and continue hodling. The long-term Bitcoin’s fundamentals still imply that the cryptocurrency has strong bullish potential; the only question is when it will realize it.

According to the founder and CEO of the cryptocurrency payment company Abra, Bill Barhydt BTC is ready for a new bullish run. The expert believes that four factors point to Bitcoin’s price increase to at least $50,000 within the next 18 months or so.

Low volatility is a harbinger of the imminent massive move. The Bitcoin volatility index (BVOL) calculated by BitMEX, spent August and September at around 40 and started to collapse sharply at the beginning of October. At the time of writing, it is registered at 29, within striking distance from the historical low of 18.6 (July 26). 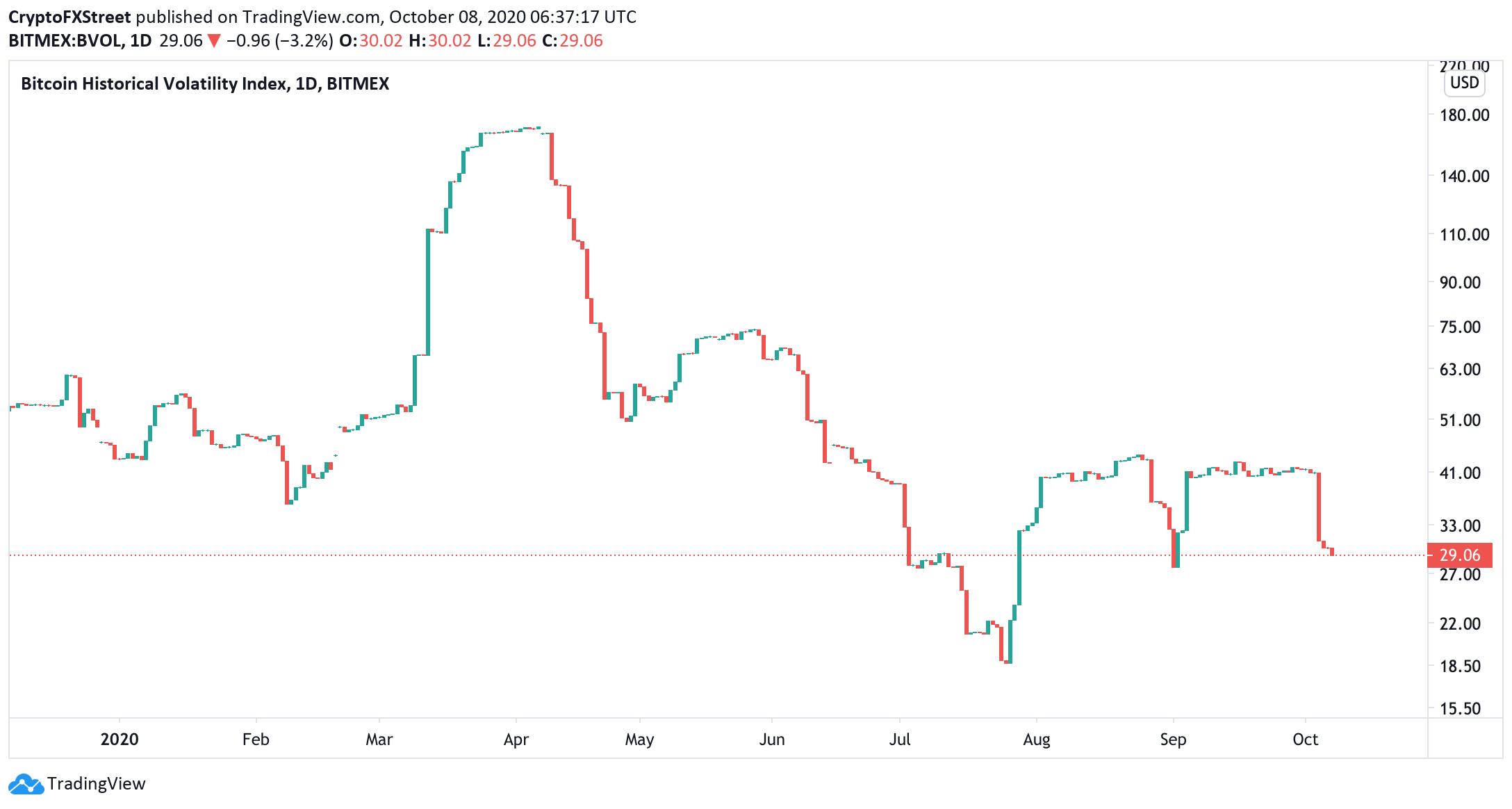 At this stage, Bitcoin is less volatile than the US stock market, and it means that the pressure is building. Most likely, the traders will adhere to the wait-and-see approach at least until the Presidential elections in the US. However, the market is ready to go wild any minute. We only need the right trigger.

Bitcoin holders are growing in numbers, which is another bullish factor for the pioneer cryptocurrency. Currently, over 21 million BTC addresses (66% of the total) have been holding Bitcoin for over a year. The figure has increased by over 4 million addresses in less than one year.

Bill Barhydt notes that Bitcoin is now held by a small number of early adopters, meaning that even a slight increase in the holder base may lead to a massive network effect.

Regulators and states are changing their minds about cryptocurrency. The recent developments in the US and in many other global jurisdictions prove that the regulators and authorities are getting serious about Bitcoin. The US Office of Controller of the Currency (OCC) is now headed by Brian Brooks, the former legal adviser of Coinbase. Naturally, he is loyal to cryptocurrencies and fintech.

The European Commission is working on a plan on how to integrate digital money into an existing financial framework. At the same time, many countries, including China, South Korea, and Brazil, are ready to launch their CBDC.

The limited supply narrative gains traction. Considering the unstoppable money printing in the US and stimulating momentary policies in most parts of the world, people start paying attention to Bitcoin. Being a hard asset with a finite supply, it is the perfect hedge against fiat currency devaluation.

What may go wrong

Bitcoin is still dependant on the price swings of the US stock market. The digital currency may be vulnerable to downside corrections amid a high level of uncertainty and anti-risk sentiments on the global markets ahead of the US’s elections.

Once the dust settles, BTC may decouple from the traditional markets and focus on its own bullish fundamentals. However, in the short run, the price may still retest the support area of $9,000.

The nearing deadline of paying out compensations to the now-defunct cryptocurrency exchange Mt Gox may send BTC to new lows. The trustee will submit the distribution plan by October 15. Many experts believe that Bitcoin may explore the recent lows as Mt. Gox creditors will choose to cash out their coins to lock the exchange difference of 2,600%.

From the technical point of view, BTC/USD has been oscillating inside the narrowing Bollinger Bands on a daily chart that confirms the market’s high level of uncertainty.

The initial support comes around $10,400, with the Bollinger Band’s lower line located on the approach to that level. Meanwhile, the resistance coincides with the psychological $11,00 that has been limiting the recovery since the end of September. 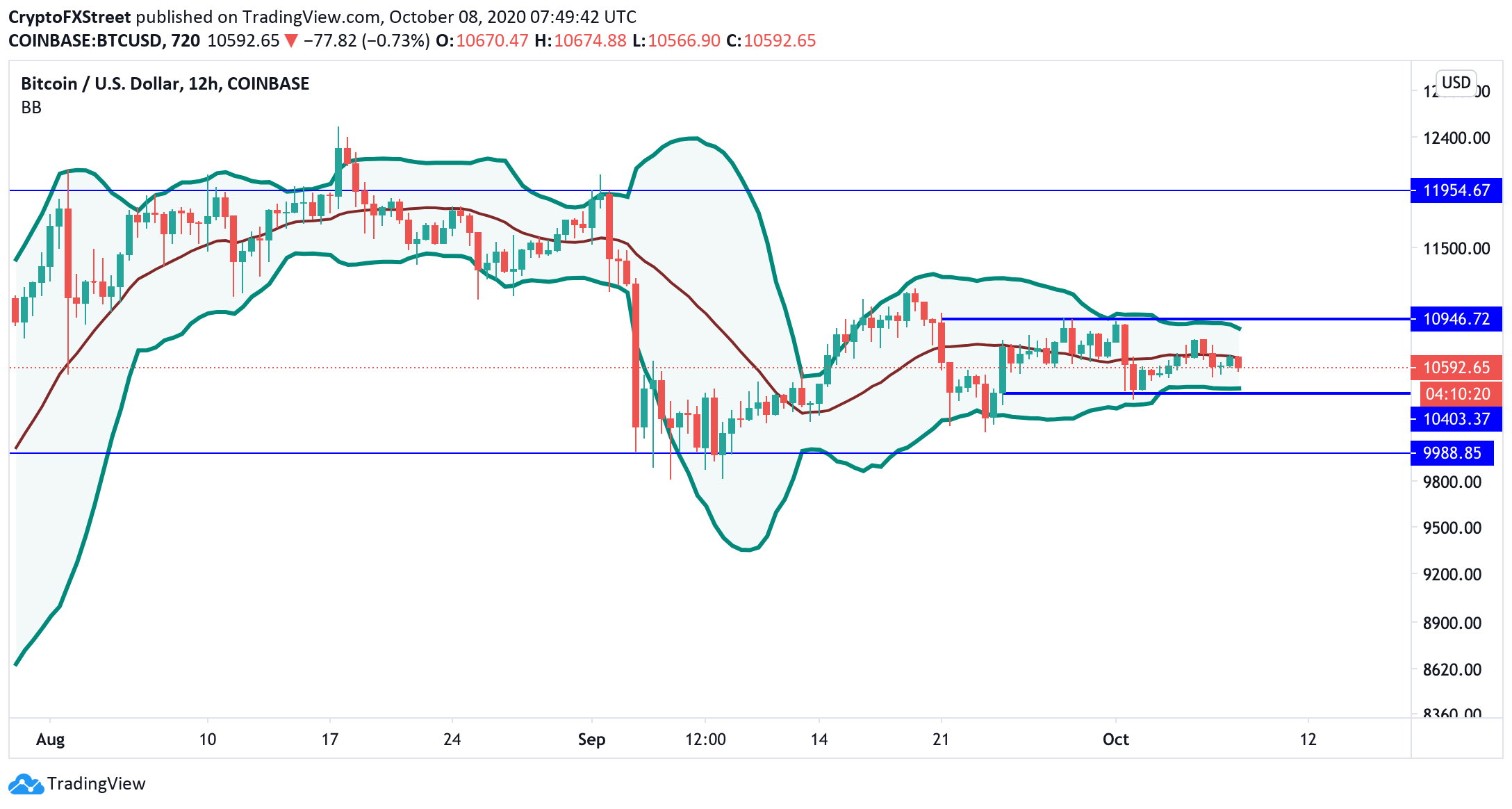 A closer look at the In and Out of the Money stats confirms that there is a big cluster of addresses holding over 1.16 million BTC on approach to $11,000. It means the bulls may have a hard time pushing through this barrier. However, once it is out of the way, the price may continue rallying up to $12,000 as there are no significant resistance barriers above $11,000.

GBP/USD: Hitting 1.30 seems out of reach as Brexit bring the pound back down

The founder and CEO of Abra is bullish about Bitcoin. The flagship cryptocurrency gets ready to break from the range. In the short-term, the growth may be derailed by technical factors and global uncertainties. Bitcoin (BTC) is changing hands at $10,630, mostly unchanged both on a day-to-day basis and since the beginning of the day. The flagship cryptocurrency recovered from the recent low of $10,135, but the upside momentum faded away on approach to the local resistance created by $11,000.  Receding volatility and little price action may be frustrating for BTC traders, but the hardcore HODLers keep calm and continue…