Latest
You are at:Home»FXStreet News»GBP/JPY Price Analysis: Hits the highest level since September 2020, around 142.35

A strong pickup in demand for the British pound pushed the GBP/JPY cross to the highest level since early September 2020, around the 142.35 region during the mid-European session.

Meanwhile, the recent appreciating move over the past four months or so has been along an upward sloping channel. This points to a well-established bullish trend and supports prospects for a further near-term appreciating move.

The positive outlook is reinforced by bullish oscillators (on the daily chart), which are still far from being in the overbought zone. Hence, a move back towards September 2020 highs, around the 142.70 area, looks a distinct possibility.

Any further move up is likely to confront resistance near the top boundary of the mentioned trend-channel, just ahead of the 143.00 mark. A sustained move beyond will mark a fresh bullish breakout and pave the way for additional gains.

On the flip side, any meaningful pullback might now be seen as an opportunity to initiate fresh bullish positions. This, in turn, should help limit the downside near a previous resistance, now turned support near the 141.25 region.

This is closely followed by the 141.00 mark, which if broken might prompt some technical selling. The GBP/JPY cross might then accelerate the slide further towards the 140.45 intermediate support en-route the key 140.00 psychological mark. 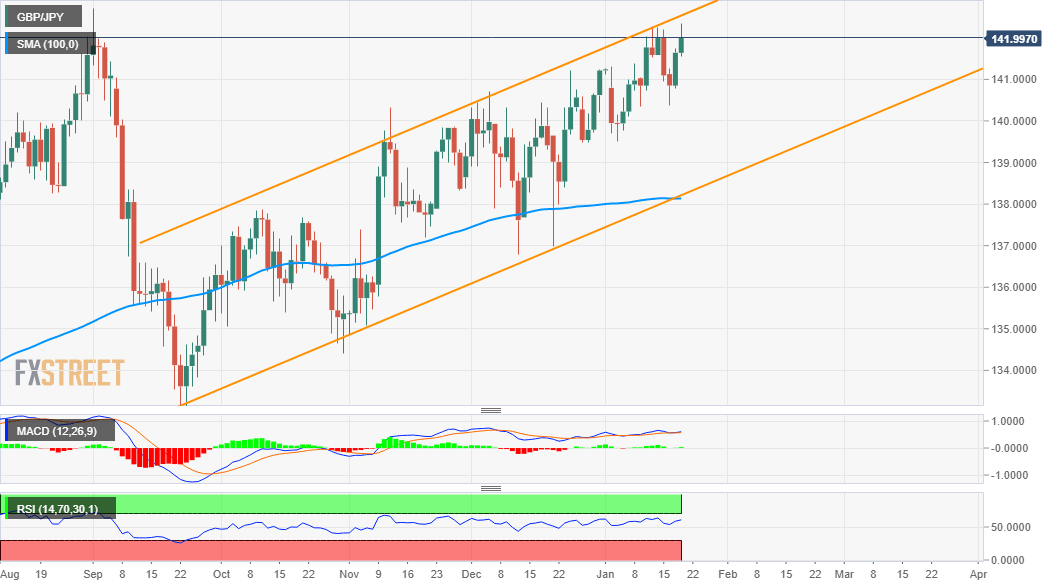 Get the 5 most predictable currency pairs
Previous ArticleSilver Price Analysis: XAG/USD to recover towards the 27.97 recent high – Commerzbank
Next Article ECB Preview: Lagarde may try to talk down the euro providing a buy-the-dip opportunity