The focus is with Brexit from a domestic standpoint, while investors are keeping a close eye on US politics and Congress this week as well.

Firstly, British and European Union negotiators have been attempting to bridge their stubborn differences relating to a post-Brexit trade deal.

However, we are still no clearer as to whether there will be a Candian style deal agreed or if the UK will fall out of the union with any kind of a deal.

The negotiations had at best 48-hours to avoid a disorderly parting of ways at the end of this month.

The EU and UK have released a joint statement.

The two sides stated that they asked for our chief negotiators and their teams to prepare an overview of the remaining differences to be discussed in a physical meeting in Brussels in the coming days.

There are differences that remain on critical issues.

”We agreed that the conditions for finalizing agreement are not there due to remaining significant differences on 3 critical issues; a level playing field, governance and fish.”

”Conditions for agreement are not there.”

The UK’s PM Boris Johnson will now have to go to Brussels to meet with Ursula von der Leyen.

Meanwhile, European macro investors also await an EU summit starting on ‘Super Thursday’ to break an impasse over a 1.8 trillion-euro coronavirus aid package, as well as the last European Central Bank policy meeting of the year on the same day.

As for the US, Congress is likely to pass a one-week stopgap spending bill to avert a shutdown at the end of this week in order give negotiators more time to figure out what they are going to do with government funding on a longer-term basis.

Elsewhere, markets will not only be watching out for progress on the $908 billion bi-partisan stimulus bill in the US Senate, but also whether the Food and Drug Administration, FDA, approves the Pfizer/BioNTech vaccine when it meets on Thursday. 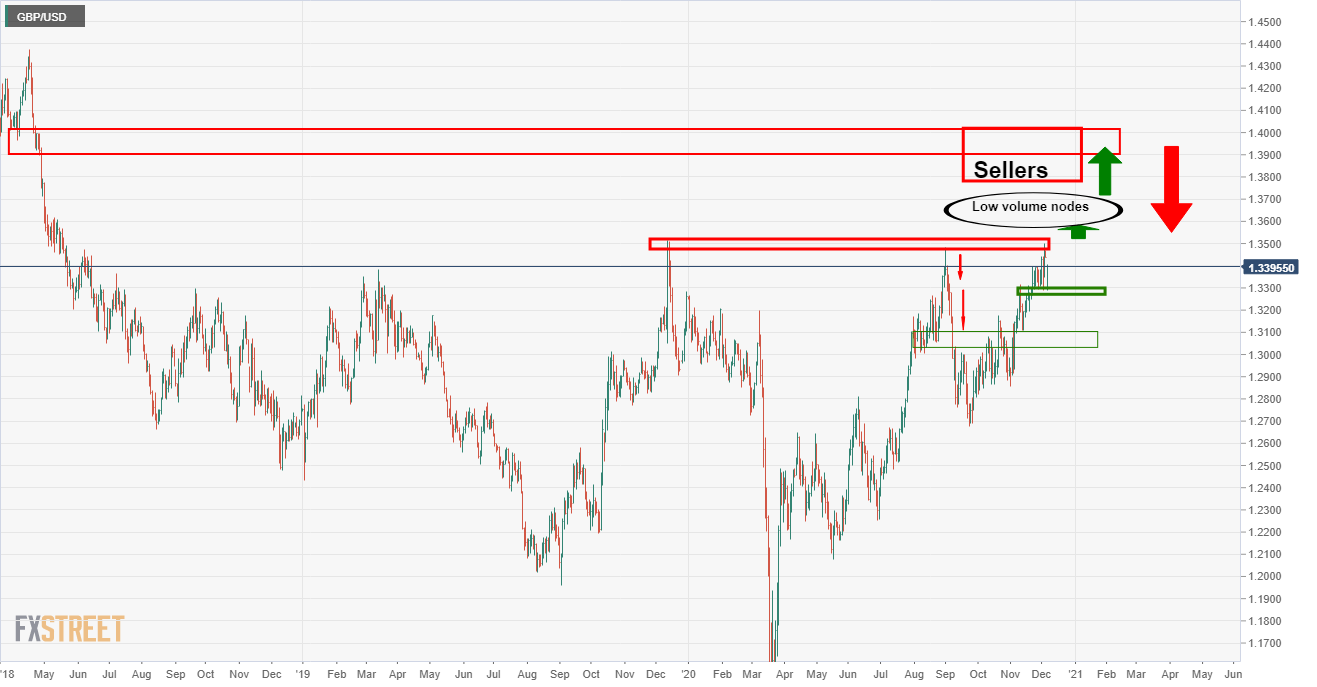 In the prior analysis, it was identified that there is a huge void in the volume at price levels between the recent tops and the 1.38 area.

The market has been hit very hard ahead of the low volume node area and the focus remains on the downside at this juncture.

Head and shoulders in the making?

The price has left a wick that is expected to be filled in on the lower time frames to complete an impulse, correction and downside extension.

In doing so, this will also be the makings of a bearish head and shoulders pattern.

Forex Today: It’s all about Brexit

GBP/USD is in a phase of consolidation following recent failures to the upside and downside.  Brexit deal is still elusive and talks move into the 11th hour.  GBP/USD is trading at 1.3390, between a 1.3223 and 1.3437 range for the day, down some 0.30%. The focus is with Brexit from a domestic standpoint, while investors are keeping a close eye on US politics and Congress this week as well. Firstly, British and European Union negotiators have been attempting to bridge their stubborn differences relating to a post-Brexit trade deal. However, we are still no clearer as to whether there will be a…