Latest
You are at:Home»Opinions»GBP/USD at the mercy of Boris Johnson and Trump’s trade

Boris Johnson has been offering everything to everybody. The favorite to win the Conservative Party’s contest has said that leaving the EU by the October 31st deadline is “do or die.” His strong words have headed leading newspapers and pushed away unflattering stories about his love life and pleasing the hard-Brexiteers.

However, the former foreign secretary also said that a no-deal Brexit has a million to one chance – seemingly trying to soothe concerns within the moderate wing of the party. Johnson is battling his successor at the foreign office – Jeremy Hunt – who offers a more moderate approach on Brexit. Pound traders found it hard to trade the contest despite the center-stage it takes.

Mark Carney, the Governor of the Bank of England, has warned that Britain will be unable to avoid a no-deal using an arcane clause of the GATT agreement – contradicting Johnson’s promises. Carney also hinted that the BOE might cut interest rates in case of a hard Brexit.

On the other side of the Atlantic, the central bank has cooled market expectations for a significant interest rate cut of 50 basis points. James Bullard, President of the Saint Louis branch of the Federal Reserve – and a known dove – has said that a 25bp cut as an “insurance policy” is sufficient. Moreover, Fed Chair Jerome Powell has conveyed a balanced message by stressing the strengths of the US economy. Recent data has been mixed with final GDP for the first quarter, confirming the previous read of 3.1% annualized growth.

Reports about a “trade truce” between the US and China have helped alleviate market tensions ahead of the all-important summit between Chinese President Xi Jinping and his US counterpart Donald Trump. Both countries have reportedly been discussing a freeze on new tariffs while they resume trade talks. At the time of writing, China is seemingly shying away from the proposal and wants all recent duties removed. GBP/USD has risen on optimism for an accord and dropped as tensions intensified.

Overall, internal UK politics, the Fed, and trade were on traders’ minds.

The Tory leadership contest is set to heat up ahead of the projected declaration date of the new leader on July 23rd. Hunt – the underdog – is set to intensify his attacks on Johnson and may force the leading candidate to offer more explicit messages.

Moreover, Conservative members who support remaining in the EU may voice their opposition to leaving without a deal. If enough fail to support Johnson in a vote of confidence, he may be unable to enter Downing Street, and a new election may be called – increasing uncertainty. This option seems remote at this point, but Brexit has polarized British society, and both major parties have already MPs.

The UK economic calendar features Markit’s forward-looking purchasing managers’ indices, which gauge businesses’ mood amid growing uncertainty. Manufacturing PMI is set to top 50 points – thus returning to growth. The construction sector has been contracting for some time and may remain below 50 also in June’s report.

The all-important services sector – the UK’s largest – is set to see a decline from 51 to 50.6 points – still growing, but only just. If the services PMI dips to contraction, the pound may suffer amid fears of a recession.

Here are the events lined up in the UK on the forex calendar:

US events: Trade summit and the NFP buildup

Presidents Trump and Xi meet early in the weekend, and the results of their encounter will echo throughout the week. If Trump refrains from slapping new tariffs and the world’s largest economies agree on the way forward, the safe-haven US dollar may be sold off, and GBP/USD may have room to run. If talks break up and the US hits China with tariffs, GBP/USD has room to the downside.

The main economic event of the week is Friday’s Non-Farm Payrolls. Investors will receive hints towards the critical release already on Monday. The ISM Manufacturing PMI for June is set to decline but remain above 50 – indicating growth in the sector.

The ADP Non-Farm Payrolls report for the private sector sent a warning sign last month – with an increase of only 27K – and will be watched very carefully this time. A return to average job growth figures is forecast. The ISM Non-Manufacturing PMI serves as an indicator for the services sector and also works as a hint towards the NFP. According to ISM’s forward-looking survey, the industry has enjoyed robust growth in May, and a minor slide is due.

American traders are on holiday due to Independence Day on Thursday and will be back for the employment report on Friday. After a disappointing increase of only 75K posts in May, economists expect an increase of 165K – below the averages – but still a return to normality. Wage growth is expected to increase by 0.3% month on month in June after falling short of expectations with 0.2% in May.

The Federal Reserve observes the labor market figures. A second consecutive month of downfalls may raise expectations for a substantial cut in interest rates in July and may send the dollar plunging. An increase of over 200K may trigger speculation that the Fed will refrain from reducing rates. 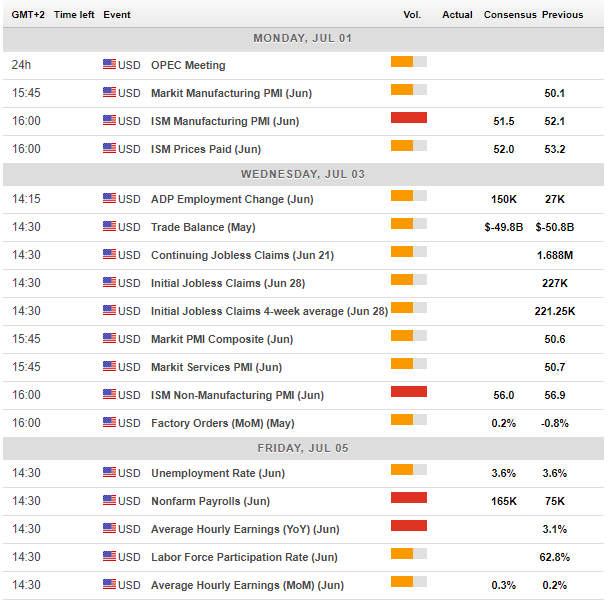 Pound/dollar has hit a higher high at 1.2785 and so far has refrained from setting a lower low under 1.2505 – bullish signs. However, it remains below the 50, 100, and 200-day Simple Moving Averages. The Relative Strength Index and momentum are balanced. Overall, the technical picture is mixed. 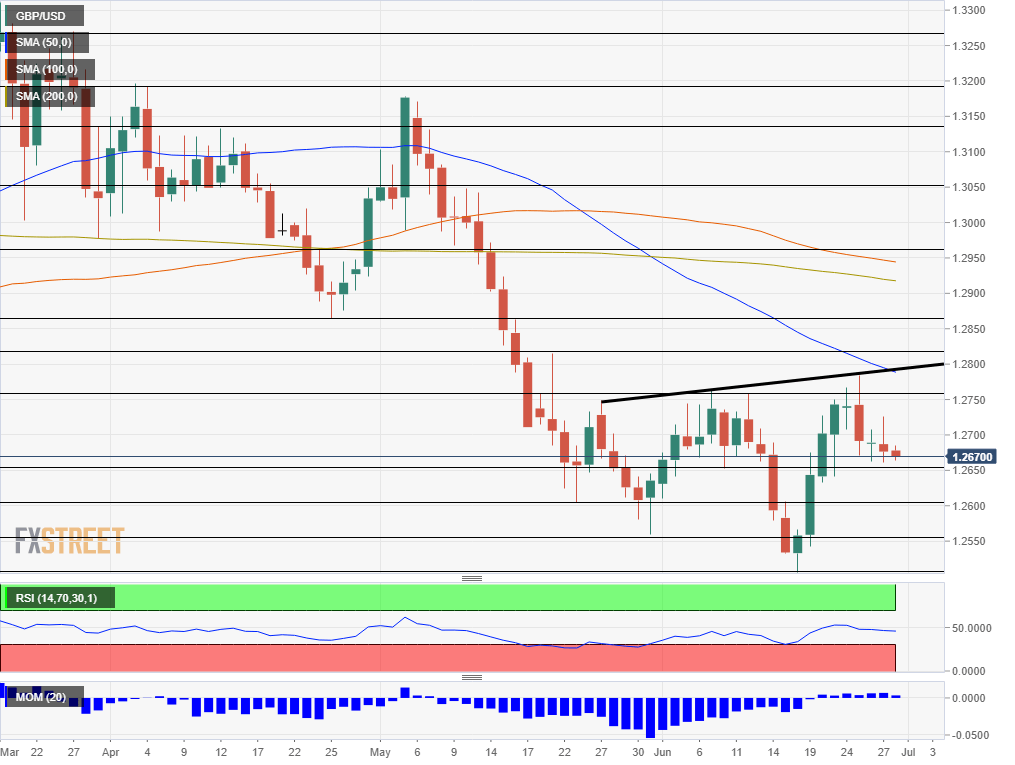 The FXStreet Poll shows a mixed picture. It seems that experts are also confused by the contradicting statements by Johnson and also by uncertainty related to trade wars. The forecast for the short term is neutral, then bearish in the medium term, and finally bullish in the long term. Targets have remained unchanged in the short term but have been slightly downgraded in the medium and longer terms. 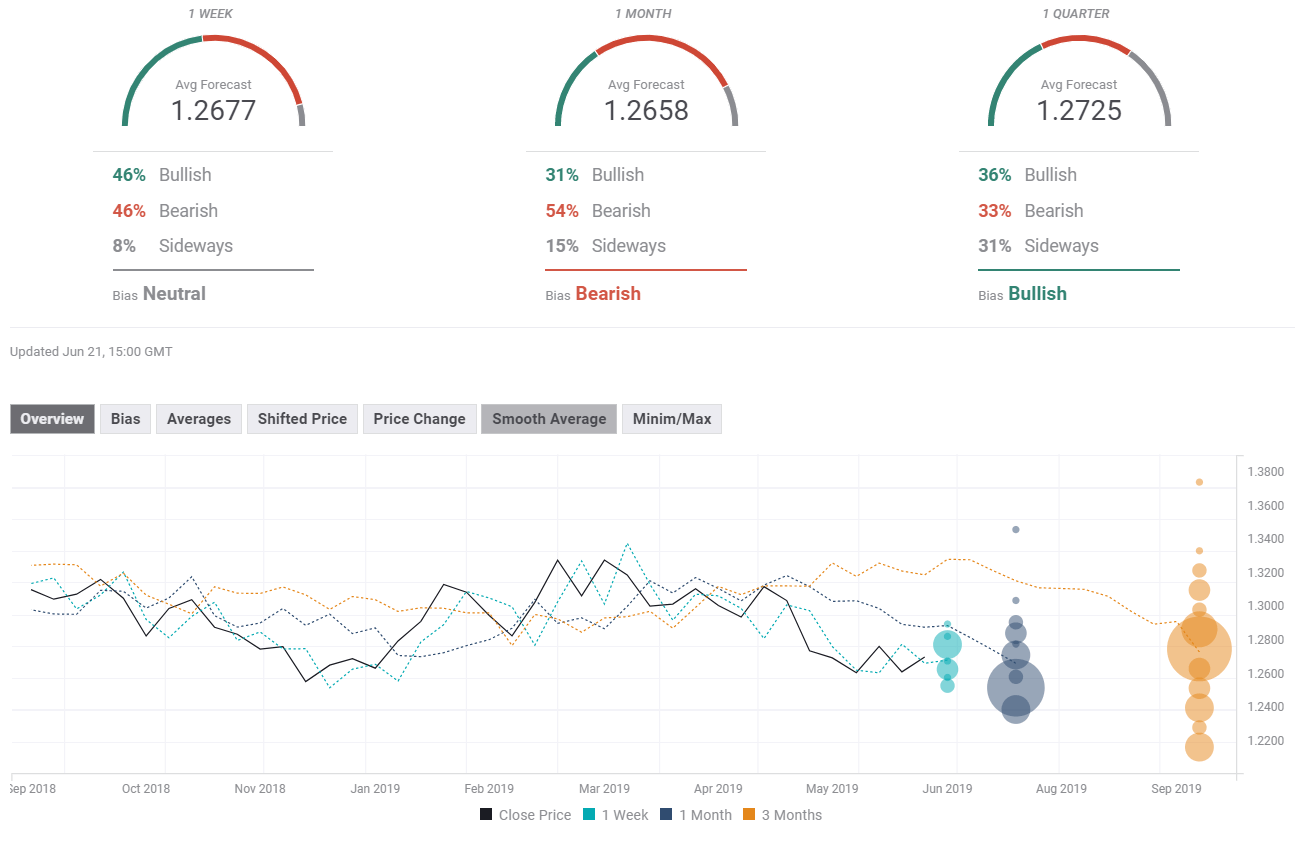 Get the 5 most predictable currency pairs
Previous ArticleIraqi oil minister: There will be a rollover for 9 months at the same quota levels for everybody
Next Article Ripple market update: XRP/USD back under $0.4 as bears return