GBP/USD bulls stepping in at weekly support despite COVID risks

In an improved risk environment, the pair is bid on the session as bears exit at weekly and monthly support.

Bulls are stepping up to the plate despite the growing concerns over the spread of the coronavirus and the Bank of England’s persistent commentary suggesting that negative rates are an option that is still on the table.

Earlier today, the UK reported the highest ever COVID daily case count at 6634 cases on the same week that the PM Boris Johnson outlined tighter rules.

Public Health England also said there had been 40 new deaths, up from 37 the day before.

The number of people testing positive for coronavirus in England has nearly tripled since August.

According to the government’s Test and Trace system, there has been an increase of 180 per cent in positive cases since the end of August.

“We must all follow the new measures that have been bought in to help control the virus and download the new NHS Covid-19 App which is the fastest way of knowing when you’re at risk.”

From new data on the number of people adhering to isolation and quarantine has found, the Telegraph has reported that just 18 per cent of people in the UK self-isolated after developing symptoms of Covid-19 between May and August,

In addition to this, only 11 per cent of people quarantined after being told by NHS Test and Trace that they’ve been in contact with a confirmed case.

If the UK public does not begin to adhere to the advice of the government, there is a slim chance that COVID-19 is not going to be a huge problem for pound going forward.

Meanwhile, we have seen the US dollar’s correction resonate broadly in the FX complex.

The recovery can be partly put down to the fact that the Federal Reserve is not going to be left behind.

Since the market had over-interpreted the Monetary Policy Minutes with respect to negative rates, we have heard from the Bank of Englands Governor, Andrew Bailey, a couple of times this week.

At the start of the week, he downplayed the comments in the minutes, saying that nobody should read more into this as it’s just the next stage of the work to ensure that negative rates could be used if necessary.

Instead, he said that given the uncertainty and downside risks, they would need “a lot of very strong evidence” on the recovery before a shift in policy.

Baily is likely concerned about the second wave and subsequent lockdown measures.

The Governor appears to be more concerned about the economy now than he was at the start of the month during his testimony before the Treasury Select Committee earlier this month.

Today, he once again addressed the prospects of negative rates and said,” t would be a cardinal sin not to look first at whether the UK could use it too.”

We should have negative rates in the toolbox because other countries have demonstrated they can do it.

However, he once again reminded that the BoE have reached no view on whether they would use negative rates.

We have got to get answers.

He noted at the start of the week that economic activity is still 7-10% below pre-COVID levels after the recent burst of activity and that the “hard yards are ahead of us.”

Firstly, the DXY is at an interesting juncture.

On the daily chart, the price has potentially completed wave 3 of a 5-wave analysis:

On a long-term outlook, the bulls look good to go on a pullback for higher levels. 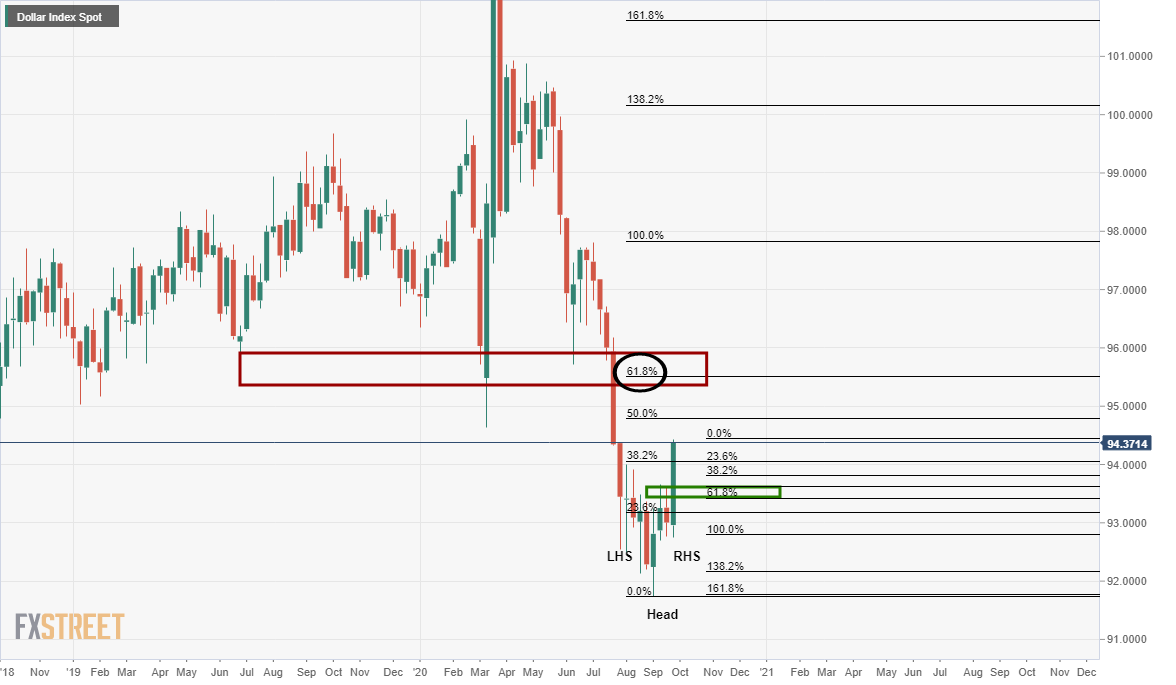 As for GBP/USD, the price has reached a weekly support structure:

Support structure holding up, so far

A possible outcome of the support structure holding

GBP/USD bulls taking back control at a critical support structure. BoE negative rates still on the table, USD might give some ground back at this juncture.  GBP/USD is currently trading at 1.2763 between a range of 1.2690 and 1.2781. In an improved risk environment, the pair is bid on the session as bears exit at weekly and monthly support. Bulls are stepping up to the plate despite the growing concerns over the spread of the coronavirus and the Bank of England's persistent commentary suggesting that negative rates are an option that is still on the table.  Less than 20 per cent…