Latest
You are at:Home»Forex News»GBP/USD: Buying opportunity? Brexit silence may be a bliss, everything else just noise

“Hello darkness, my old friend” – these first words of “The Sound of Silence by Simon & Garfunkel reflect the state of Brexit talks. After intense nonstop reports from the negotiations, the darkness and silence are likely a positive sign of progress. Can the pound resume its gains?

GBP/USD surged by some 200 pips on Monday after the EU and the UK announced they will “go the extra mile” and abandon the self-imposed Sunday deadline. However, cable climbed down as a breakthrough failed to materialize and Chief EU Negotiator Michel Barnier’s comments of a “narrow path.” On the flip side, the mere existence of a way forward is positive news.

The sound of silence is unlikely to last for too long – especially as the clock is running down toward the genuine December 31 deadline – and updates may surface on Tuesday. Another glimmer of hope comes from reports suggesting the EU and the UK have come somewhat closer on the thorny Level-Playing Field topic, which defines how British divergence from EU rules affects access to the bloc’s single market.

Outside the cramped negotiating rooms in Brussels, markets are somewhat more gloomy after the UK announced London would enter severe Tier 3 restrictions on Wednesday. The economic hit to the mega-city will probably be significant, yet that was expected. Perhaps more worrying was the suspicion that a more contagious strain of the virus is spreading in the UK – albeit probably not more deadly nor vaccine-resistant.

UK labor market figures were mixed. The unemployment rate edged up to 4.9% in October, better than expected, while jobless claims disappointed with a jump of 64,300 in November, worse than projected. The figures offset each other and had little impact on the pound. Inflation and retail sales statistics precede Thursday’s rate decision by the Bank of England, which will likely stay put after increasing its bond-buying in November.

The UK immunization campaign continues in full swing and markets are applauding the kick-off of the US effort, coming as some 300,000 Americans lost their lives to the virus. Both countries are inoculating the Pfizer/BioNTech jab, and authorities are on course to authorize the Moderna one in the near future.

The competing virus vs. vaccine narratives are keeping markets stable for now, but the balance could shift both ways with new announcements on both fronts.

US fiscal stimulus talks have been muddling on in recent days but may receive fresh impetus. Senate Majority Leader Mitch McConnell called for a deal after remaining mostly silent. His move follows the formal election of Joe Biden as America’s 46th President. Progress on a $900 billion bill would boost sentiment and weigh on the safe-haven dollar. 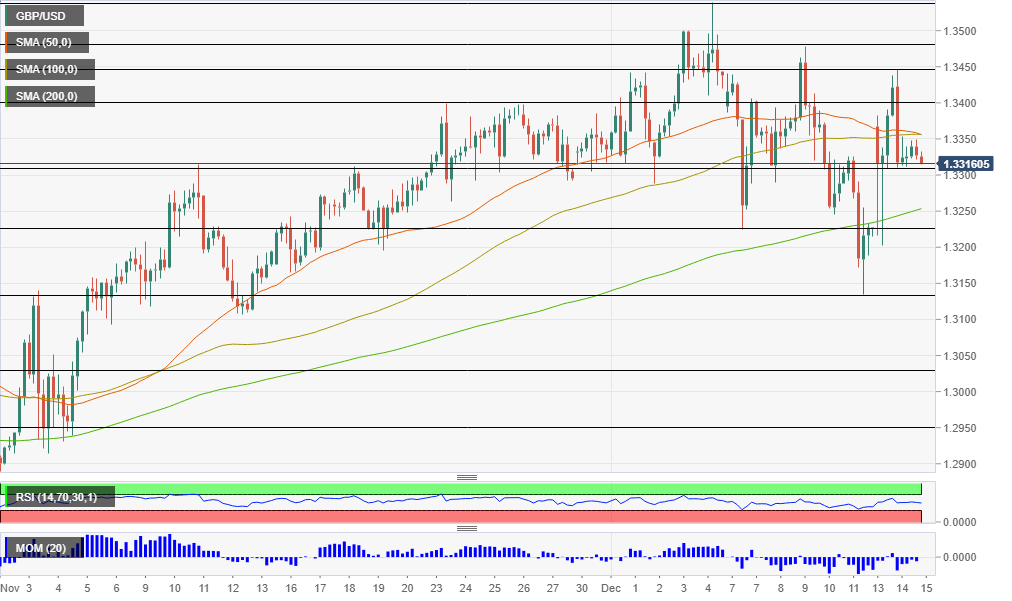 Pound/dollar dropped below the 50 and 100 Simple Moving Averages on the four-hour chart but holds above the 200 SMA. Momentum remains to the downside but is waning. Overall, bears have gained ground, but are far from full control.

Get the 5 most predictable currency pairs
Previous ArticleXRP slices through critical support barrier, $0.33 in sight
Next Article S&P 500 Index: The risk of a deeper corrective setback increases – Credit Suisse