Latest
You are at:Home»Forex News»GBP/USD: Can sterling surge above 1.40? Sunak and the Senate hold the keys

Read his lips – new taxes are coming? UK Chancellor of the Exchequer Rishi Sunak is set to extend the government’s successful furlough scheme through September, in a step that would boost the economy and is already helping sterling. However, corporation tax rises remain a mystery.

If Britain hikes levees on companies, sterling’s upside move could stall, while leaving a hole in the budget would allow for further gains.

So far, GBP/USD has been able to advance thanks to some calm in markets. US ten-year bond yields have stabilized above 1.40%, allowing the dollar to take a break from its gains. Lael Brainard, Governor at the Federal Reserve, said that the speed of the move in bonds “caught her eye.” However, the bank still sees an increase on returns as a positive sign.

One of the main drivers of higher Treasury yields – and the dollar – has been President Joe Biden’s $1.9 covid relief package. After passing the House, the Senate is set to begin debating it on Wednesday, and lawmakers are set to strip out or water down some of the measures. How much will be left out? If Democrats unite around most parts of the legislation, the dollar could resume its gains, but if the scope falls toward $1 trillion, the greenback could cool down.

US data is also of interest. The ADP jobs report is set to show an increase of 177,000 private-sector positions in February, a moderate increase that would be in line with expectations for Friday’s Nonfarm Payrolls. The ISM Services PMI is set to show rapid growth in America’s largest sector – and its employment component is also critical for the NFP. The manufacturing PMI smashed estimates.

All in all, cable is at crossroads with politicians holding most of the keys toward the next moves. 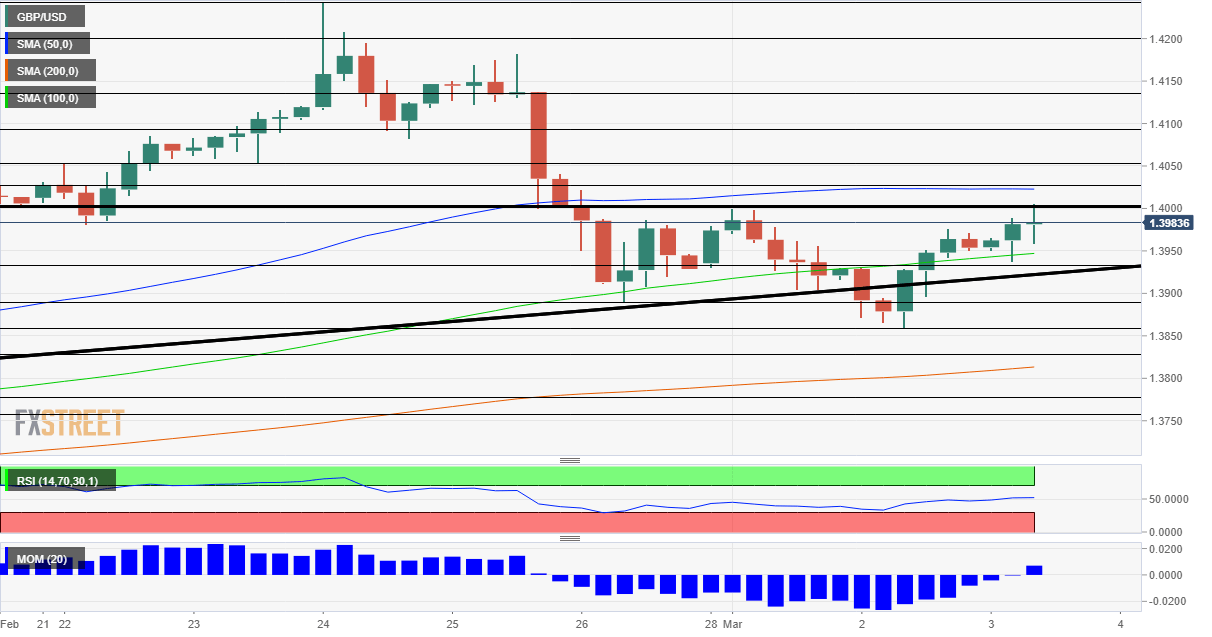 Momentum on the four-hour chart has turned to the upside, providing ammunition for the bulls, which have also pushed above the 100 Simple Moving Average. On the other hand, the psychological cap of 1.40 looms, and so does the 50 SMA.

Where next for the dollar as the Fed refocuses, bonds bring action, jobs set to cause jitters