Home » GBP/USD is waiting for two hammers to fall

GBP/USD is waiting for two hammers to fall

This was the week: Succumbing to USD strength

Parliament returned, but not much happened in cross-party talks between the government and the opposition. Labour accused the ruling Conservatives of not making any concessions, and at one point, a report claimed that the negotiations are close to collapsing.

Some Brexit-supporting Tory members attempted to change the party rules to facilitate May’s ousting, but their scheme failed. Her position is still in danger.

The downfall of GBP/USD was triggered by the USD side of the equation. The greenback gained ground on upbeat economic figures. New Home Sales rose to 692K annualized in March while Durable Goods Orders smashed expectations with 2.7% on the headline and 1.3% on the “core of the core.”

The first read for US Q1 GDP came out at 3.2% also above expectations. However, several components and a “sell-the-fact” response limited the greenback’s gains. See  US GDP Quick Analysis: 4 reasons for the USD drop and why it can surge

Moreover, there is a growing notion that the  Fed  is not that dovish in comparison to the others. Central banks in Japan and Canada both lowered their forecasts and tilted to the dovish side.

All in all, GBP/USD is down on two factors: the Brexit impasse and the strength of the US economy. And now the two central banks weigh in.

The central event of the week is the Bank of England’s “Super Thursday.” In addition to the rate decision and the accompanying MPC Meeting Minutes, the BOE also publishes its Quarterly Inflation Report. Governor Mark Carney comments on the report.

The UK economy is still doing well, with wages rising at a satisfactory rate of 3.5% YoY while inflation remains tame. Employment remains high and credit is cheap. The BOE signaled it would be ready to raise rates this year but was holding back due to the immense uncertainty caused by Brexit.

This is the first decision made after the UK’s exit was postponed to October 31st. Does the BOE now see calmer conditions that would allow for a rate hike? Or does the ongoing darkness around the momentous event take any tightening off the table?

The answer to the question depends heavily on the Bank’s forecasts in the QIR. Moreover, there is also a personal question: Carney concludes his term at the end of the year and markets are already seeking clues about who will succeed him.

Other central banks have made significant dovish tilts and the “Old Lady” will likely be no different. Markets are not pricing in a rate hike this year.

Other UK events: PMIs in focus

The upcoming week is much busier in the US. GfK Consumer Confidence kicks off the week but the real action begins on Wednesday with Markit ´s Manufacturing Purchasing Managers’ Index, the first out of three PMIs. The forward-looking gauge jumped to 55.1 points in March due to Brexit stockpiling. A slide may be seen now.

The second PMI is due on Thursday but may be ignored due to the BOE decision that follows. It came out just below 50 points in March, just below the 50-point threshold that separates expansion and contraction.

The third and most significant PMI is due on Thursday, and it is for the services sector. The number in March was quite a disappointment: 48.9 points, in contraction territory and casting a dark cloud about economic growth. The same question about the Brextension will be asked: does it improve sentiment due to the UK avoiding the cliff-edge? Or does the uncertainty hurt?

Here are the events lined up in the UK on the  forex calendar: 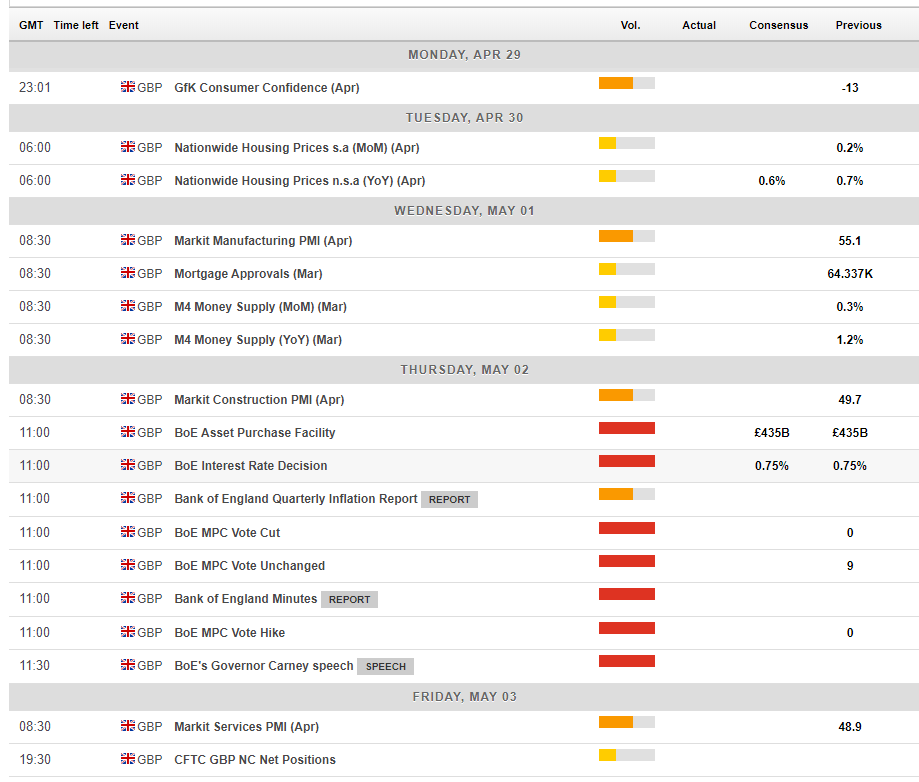 US events: Fed and the NFP

A busy week commences with the Fed’s preferred inflation measure. The Core PCE Price Index is set to drop, following the Core CPI gauge. Housing data and the CB Consumer Confidence end the week with the latter also serving as a minor hint towards the  Non-Farm Payrolls  report on Friday.

Wednesday sees strong  NFP  hints. The ADP Non-Farm Payrolls carries expectations for a bounce to 175K in April after a weak read in March. The ISM Manufacturing PMI is projected to remain around 55 points, implying OK growth in the small but essential sector.

The main event of the week is also on Wednesday. The Federal Reserve will likely leave its policy measures unchanged and reiterate its pledge for patience on interest rates. Recent economic data have been upbeat, and the message from Chair  Jerome Powell  may be bullish as well, contradicting some hopes for a rate cut later this year. The central bank’s comments on employment, inflation, and the recent growth data will all be watched very closely. The reaction to the Fed’s decision could last for several sessions and overshadow Thursday’s data.

The second top event is due on Friday. The US Non-Farm Payrolls report is expected to show another good month of job gains and wages are also forecast to be cheerful: a monthly increase of 0.3% and an acceleration of the year over year figure to 3.4%. 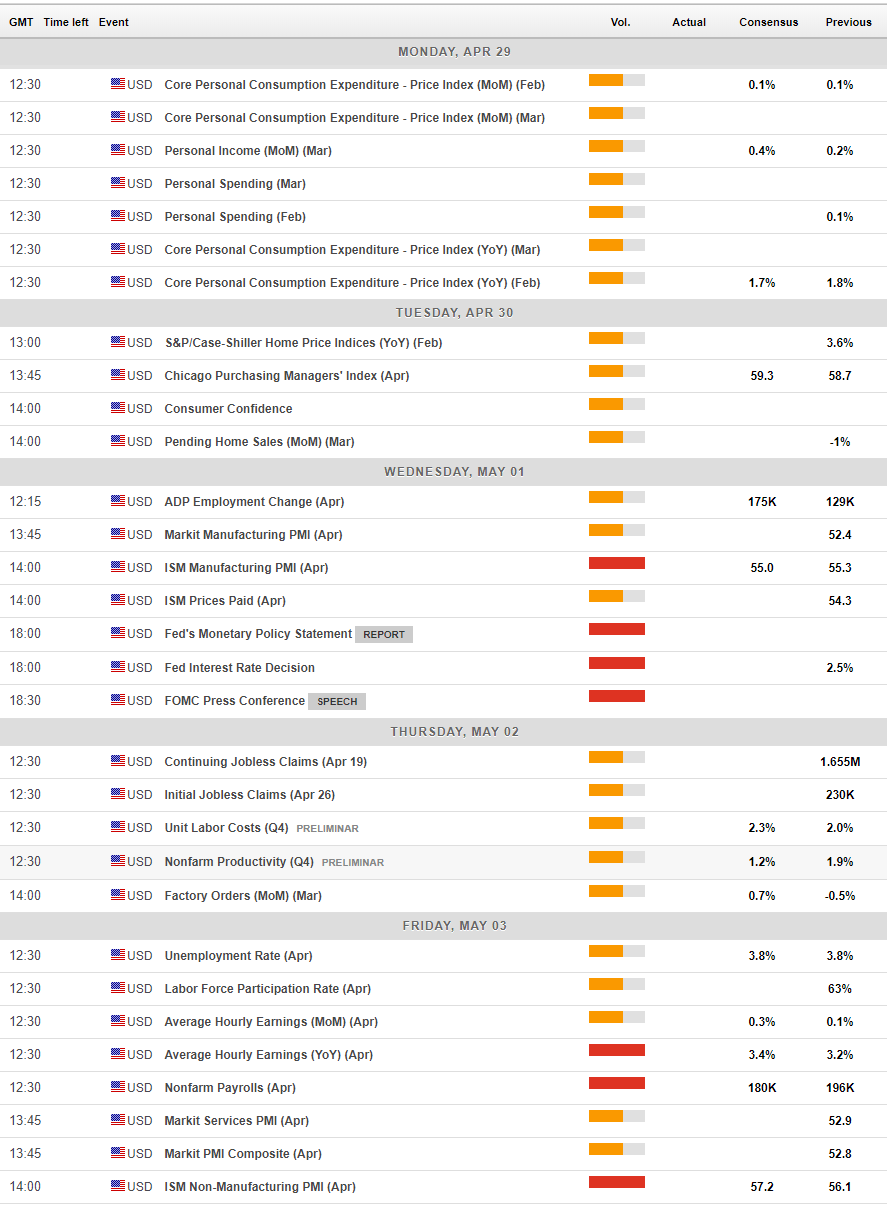 The daily chart shows a bearish picture for  GBP/USD. Momentum is to the downside, the Relative Strength Index is leaning lower, and most importantly, the pair dropped below both the 100-day Simple Moving Average and the 200-day one.

The recent low of 1.2865 serves as initial support. The next line is close: 1.2830 provided support in early February and also several times in early January. 1.2775 was the low point in February and is a critical support line. Further down, 1.2670 was a swing low in January. It is followed by 1.2660 that was a cushion around Christmas. 1.2440 was the flash crash low. 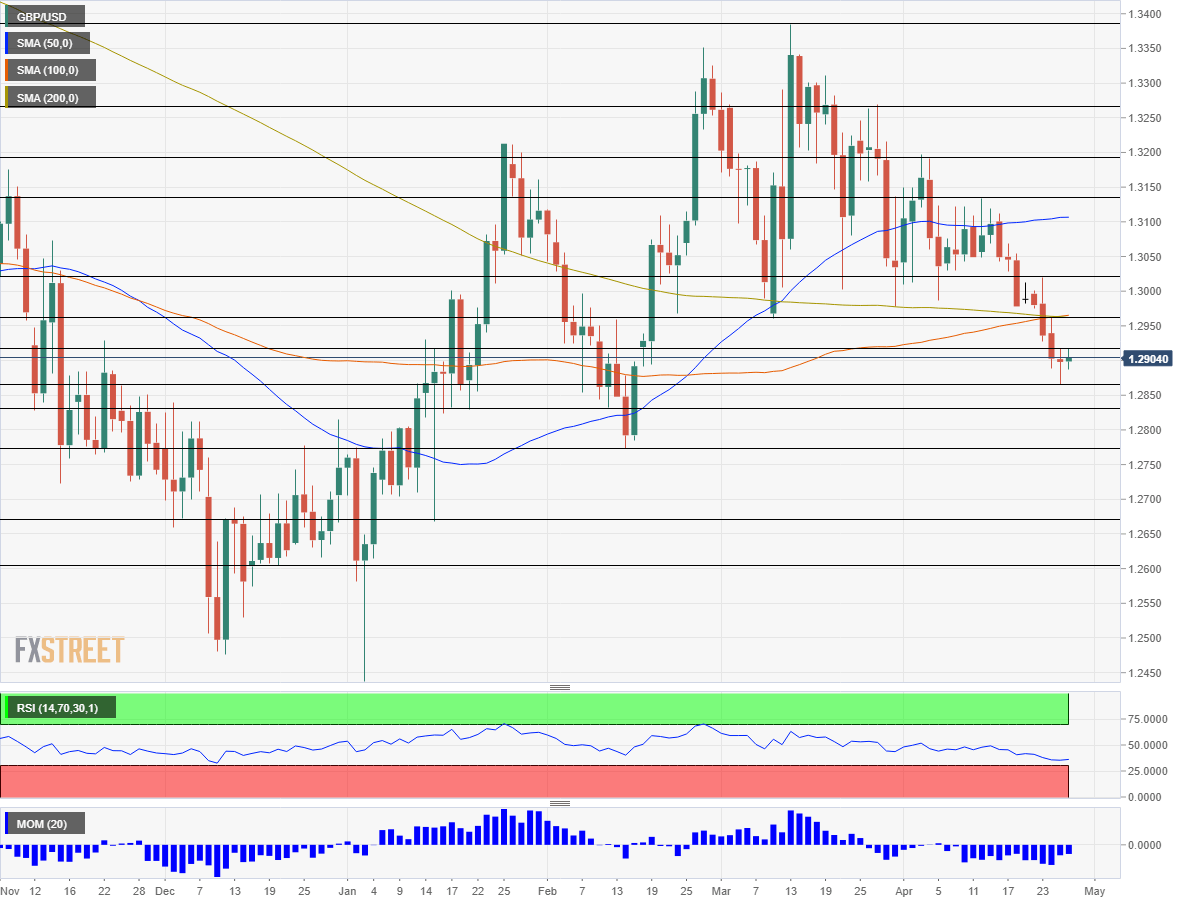 Another week of feet-dragging around  Brexit  is quite probable. Also, the  BOE  is more likely than not to follow its peers with a downgrade of its outlook. And to top it off, the Fed is unlikely to signal a rate cut anytime soon. All in all, there is quite a bit of room to the downside.

The  FXStreet Poll  shows that the target for the short-term turned lower and the bias is bearish. However, things look better afterward, with rising targets and a bullish bias. The medium-term and long-term targets have been marginally downgraded. 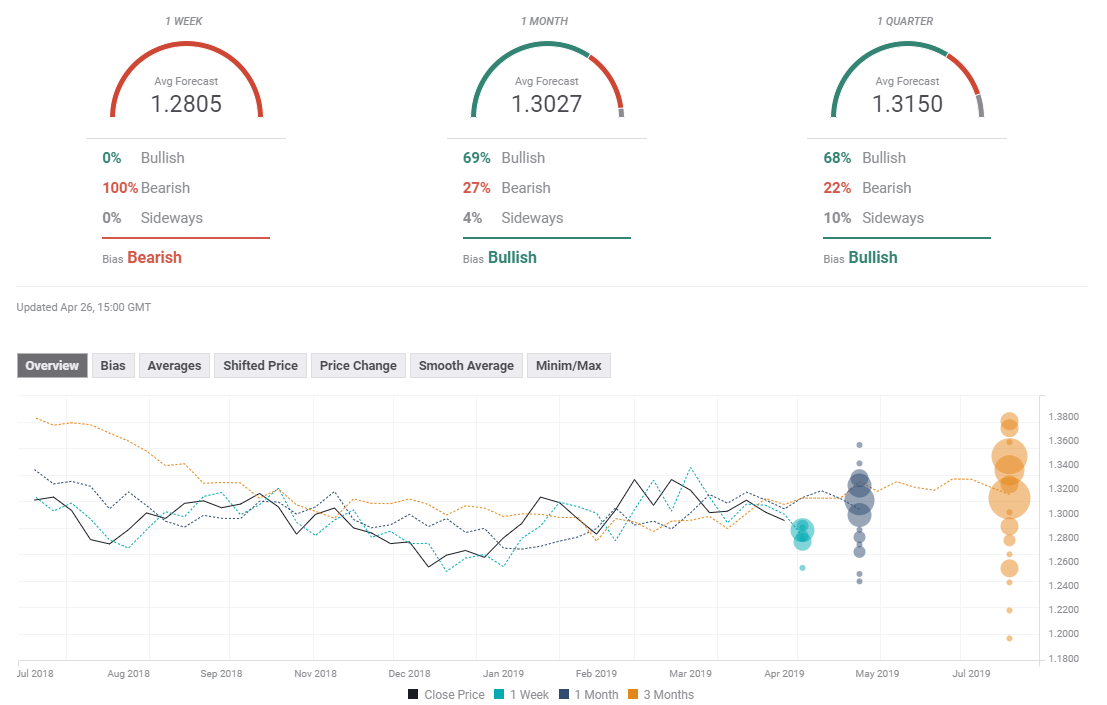 USD/RUB reverses the earlier move to the 64.80 zone

GBP/USD fell sharply on USD strength, Brexit impasse. Brexit partially gives way to the Bank of England's Super Thursday. The technical picture is bearish for the pair. Experts are bearish in the short term but bullish afterward. This was the week: Succumbing to USD strength Parliament returned, but not much happened in cross-party talks between the government and the opposition. Labour accused the ruling Conservatives of not making any concessions, and at one point, a report claimed that the negotiations are close to collapsing. Some Brexit-supporting Tory members attempted to change the party rules to facilitate May's ousting, but their…