Latest
You are at:Home»Opinions»GBP/USD may struggle with high wage expectations

Unemployment at 3.8% and annual wage growth matching that rate – such headlines may fuel the UK government’s optimism as it heads out of the EU without a deal – yet these expectations may be over the top.

The jobless rate stood at 3.8% in May and economists expect the same figure for June. The difference lies with wage growth. Average Hourly Earnings are set to accelerate from 3.4% in May to 3.7% in June. When excluding bonuses, pay is projected to hit 3.8% after 3.6% in the previous month. 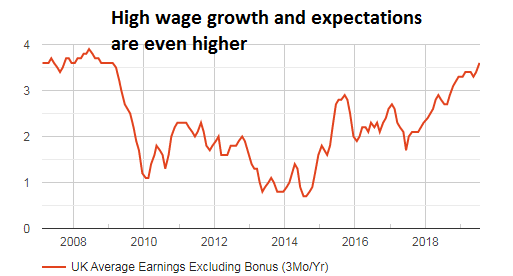 With inflation running at 2% in June, such an increase would represent real wage growth of 1.7% for earnings and 1.8% when excluding bonuses. The Bank of England is content with the increase in salaries and expects it to translate into a pickup in inflation. Governor Mark Carney and his colleagues have reiterated their desire to increase interest rates in order to mitigate potentially higher price rises – if it were not for Brexit.

If forecasts become reality, the BOE would likely continue banging on the same drum in speeches and in the next rate decision due out in September. However, it is hard to see that happening.

June has been a month of high uncertainty in British politics – when Theresa May officially quit the leadership of the Conservative Party and fears of a hard Brexit rose together with Boris Johnson’s ascent in the polls. Recent GDP numbers for June have shown that the economy squeezed that month – and in the entire second quarter. Therefore, it is hard to imagine companies accelerating wage growth while the economy is shrinking.

Moreover, the Claimant Count Change. or jobless claims has shown a significant increase of 38,000 in June – the highest since 2009. So far, the rises in claims have failed to push the unemployment rate higher. Nevertheless, their recent acceleration may tip the balance. 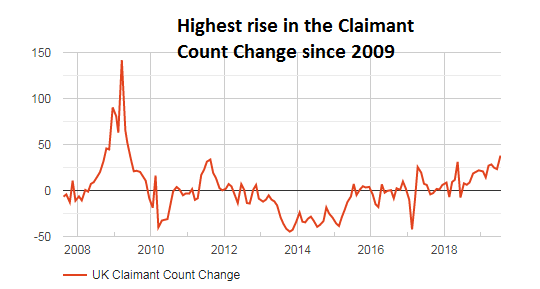 Even if wages rise as expected but the unemployment reverses course and rises from the lows of 3.8% – headlines will be gloomy.

Overall, high expectations from the UK’s labor market may result in a disappointment – and that may hurt the pound.

Sterling has already significantly suffered from the rising prospects of a hard Brexit and dropped to a low of 1.2015 – the lowest since January 2017. Several correction attempts have failed to materialize and were only “dead cat bounces.”

GBP/USD has fallen despite robust employment. If it loses that – it may extend its slump.

Get the 5 most predictable currency pairs
Previous ArticleAre Bulls Back in Business on AUDUSD and NZDUSD? – Elliott wave Analysis
Next Article EUR Futures: rallies look shallow