Latest
You are at:Home»FXStreet News»GBP/USD Price Analysis: Remains confined in a range, just above mid-1.2800s

The GBP/USD pair edged higher for the second consecutive session on Tuesday, albeit lacked any strong follow-through and remained well within the previous day’s broader trading range.

Looking at the technical picture, the overnight strong positive move stalled near a resistance marked by the top end of a near three-week-old descending channel. The pullback, however, remained limited and attracted some dip-buying near 200-hour SMA, which should now act as a key pivotal point for intraday traders.

Meanwhile, technical indicators on hourly charts maintained their bullish bias and have been recovering from the negative territory on the daily chart. The set-up supports prospects for an eventual breakthrough the trend-channel resistance, though bulls seemed to wait for Brexit updates before placing fresh bets.

That said, some follow-through buying beyond the previous day’s swing high, around the 1.2930 region, should pave the way for a move towards conquering the key 1.3000 psychological mark. A subsequent strength beyond 50-day SMA, around the 1.3025-30 region, will be seen as a fresh trigger for bullish traders.

On the flip side, the 200-hour SMA, around the 1.2820 region, might continue to protect the immediate downside. This is followed by the 1.2800 mark and support near the 1.2775 region. Failure to defend the mentioned support levels will negate prospects for any further near-term appreciating move.

The pair might then accelerate the fall back towards the 1.2700 mark before eventually dropping to multi-week lows, around the 1.2675 region, en-route the trend-channel support. A convincing break below will set the stage for the resumption of the recent sharp decline and drag the pair further below the 1.2600 mark. 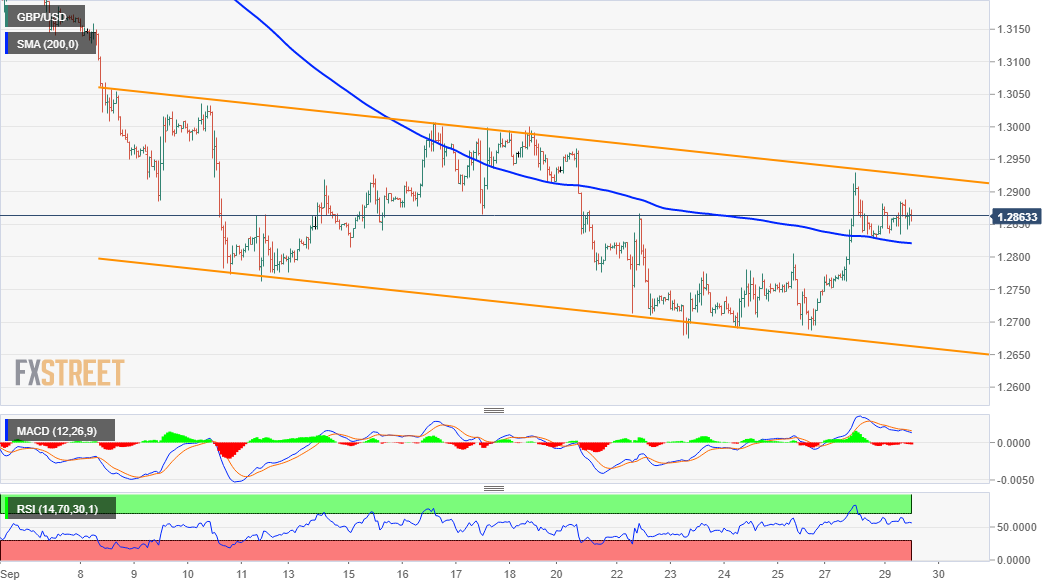 Get the 5 most predictable currency pairs
Previous ArticleUS Dollar Index challenges 94.00 ahead of data, Trump-Biden debate
Next Article Presidential Debate Preview: Trump may lose due to his own buildup, market implications