Some Brits will be horrified by the news of a new prime minister on Friday the 13. After the planned Halloween Brexit was postponed by three months, parliament voted to dissolve itself and hold elections on December 12. The pre-Christmas elections have been dubbed “jingle polls,” “Brexmas,” and also “New Year’s Leave.”

After holding back for several days, Labour leader Jeremy Corbyn decided to jump on the election bandwagon, joining other opposition parties and the ruling Conservatives. While the Liberal Democrats aimed for a vote on December 9 – facilitating the ballot for students who lean toward Remain – the government won the motion about the date. The House of Lords will now advance the bill before it becomes official, but electoral campaigns are already in full swing.

Prime Minister Boris Johnson’s Conservatives are in the lead, and they plan to ratify the Brexit accord if they win. The opposition parties offer a variety of pro-Remain stances, from renegotiating a softer Brexit and bringing it to a vote, up to revoking Article 50 altogether.

In 2017, the then PM Theresa May wanted a fresh mandate and a larger Conservative command to advance Brexit talks – but lost her majority. Some Tories have announced they would quit, perhaps fearing the same fate. The British “first past the post” system makes seat-allocation hard to calculate, and UK pollsters differ in their projections.

Polls – despite their inaccuracy – are set to rock the pound in the next 43 days toward the vote. Markets prefer a clear Conservative majority to provide certainty on Brexit – and market-friendly policies. Businesses fear Corbyn’s hard-left policies. A victory for the pro-Remain and market-friendly Liberal Democrats would perhaps be the preferred outcome, but the probability is low.

Stay tuned for a full preview of the elections. While GBP/USD is set to move in response to opinion polls, these will likely have a more significant effect closer to the polls. In the shorter term, US events are in the spotlight.

Busy day in the US

The ADP Non-Farm Payrolls report is set to show a decrease in private-sector hiring, extending the slowdown in the labor market.

See US ADP Employment Preview: This trend is not your friend.

The first release of US Gross Domestic Product for the third quarter is set to show a slowdown – only 1.7% annualized growth. It tends to have the most significant impact on currencies. Consumers have pushed the economy higher while investment has been a drag.

See US Third Quarter GDP Preview: How slow is slow?

The day culminates with the Federal Reserve’s decision. The Fed is on course to cut interest rates, but it is not 100% priced in. Jerome Powell, Chair of the Federal Reserve, will likely hint that the bank is pausing further cuts. Tension is already mounting.

All in all, Brexit is set to make way for US developments – at least today. 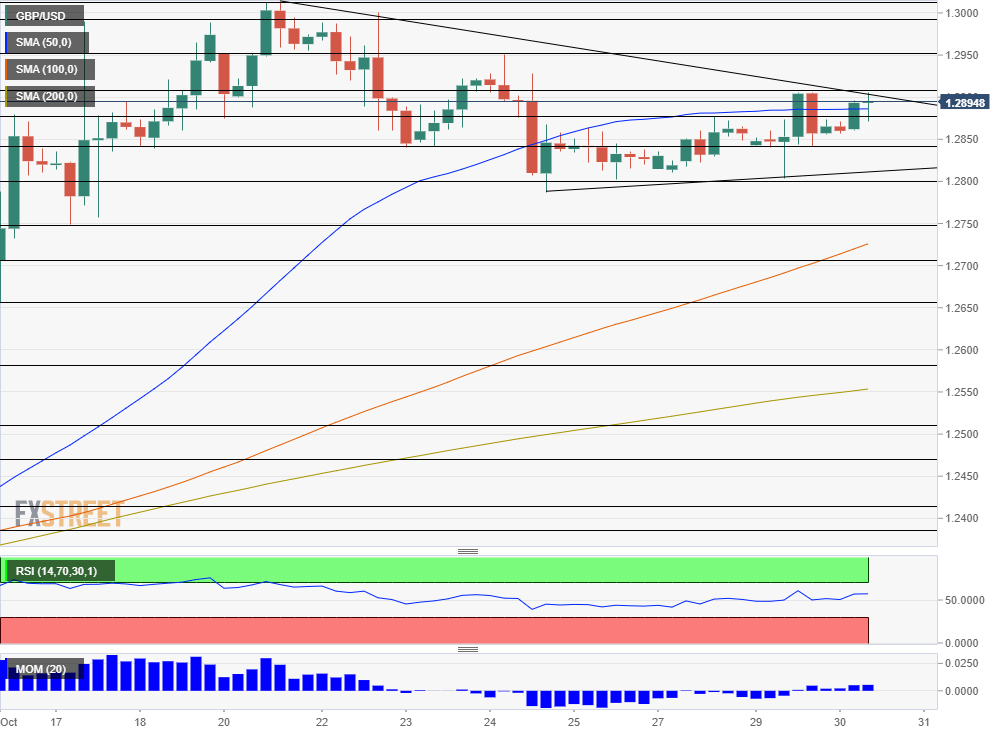 GBP/USD is trading within a narrowing wedge and is capped by downtrend resistance. Momentum on the four-hour chart is to the upside, but cable is still battling the 50 Simple Moving Average.

The picture is marginally positive.

Get the 5 most predictable currency pairs
Previous ArticleEUR/USD advancing ahead of four critical events
Next Article EUR/JPY looks for direction around 121.00 ahead of data, FOMC, BoJ