The lower band may break – both the Bank of England’s inflation range and GBP/USD’s uptrend support line.

GBP/USD has reacted with a drop as the “Old Lady” may cut interest rates as soon as January 30.

How soon is “prompt”? Speculation that the Bank of England will cut interest rates sooner rather than later is rising. Michael Saunders – a BOE member that previously voted for slashing prices – said that a “prompt” and “aggressive” response might be needed to economic weakness.

While he admitted that monetary policy has limited space to act, he supported using it to stimulate the economy, which he described as sluggish and as having “spare capacity.”

Saunders joined Governor Mark Carney is saying that prompt action may be needed. Gertjan Vlieghe also noted that the BOJ might need to cut rates. Some private forecasters are predicting an imminent cut, while others see it as coming only May.

The fate of future EU-UK trade relations after Brexit remains the main downside driver of the British economy, while trade uncertainty weighs on the global economy.

The US and China are set to sign Phase One of the trade agreement later on Wednesday. Ahead of the publication of the full details, Washington announced that it expects no further tariff reductions until November when the US elections are due. Markets were disappointed that barriers to global growth are set to persist.

UK Prime Minister Boris Johnson – who aims to clinch new trade deals with both the EU and the US quickly – may take note. President Donald Trump has labeled himself “Tariff Man,” and that may apply to post-Brexit Britain.

Overall, speculation about the BOE’s upcoming cut and trade headlines are set to rock markets. 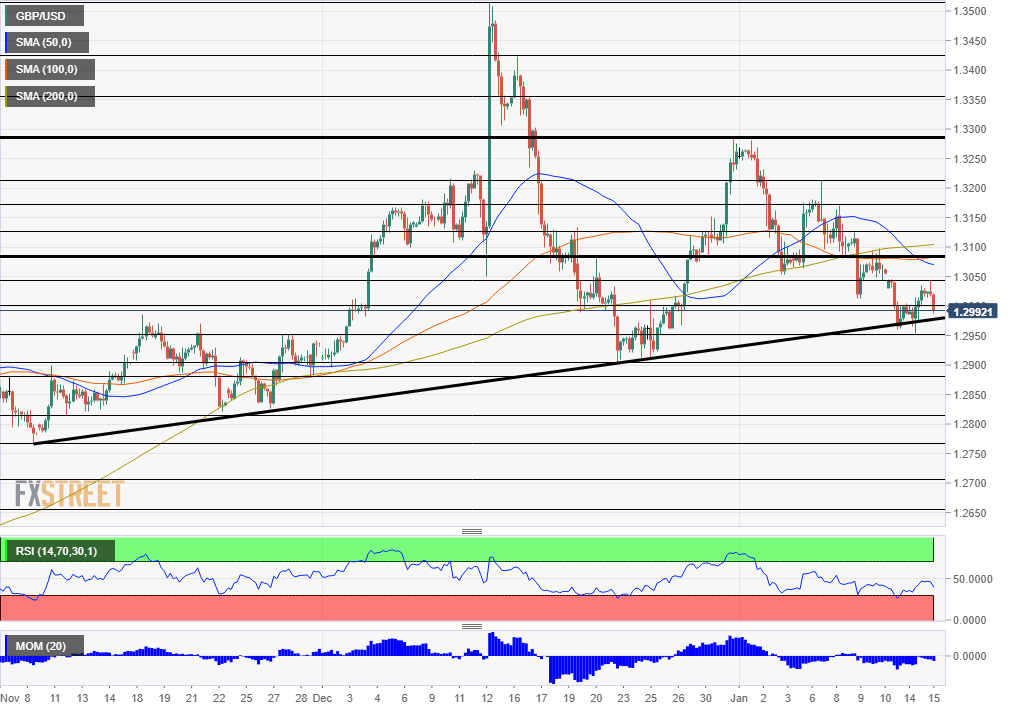 Pound/dollar is nearing the long-term uptrend support line that has accompanied it since early November. While the previous dip proved to be a false break, the second move breach could precipitate a plunge.

GBP/USD is trading below the 50, 100, and 200 Simple Moving Averages on the four-hour chart. Moreover, the Relative Strength Index is significantly above 30 – thus far from oversold conditions. And, momentum is to the downside.

Get the 5 most predictable currency pairs
Previous ArticleEUR/USD pressure set to resume amid trade uncertainty
Next Article EUR/JPY Price Analysis: Stays close to 2020 highs near 122.80