Latest
You are at:Home»Forex News»GBP/USD: The Carney Crash is back, significant support lost

“Persistent weakness could require a prompt response” – these words by Mark Carney, Governor of the Bank of England, sent the pound falling. Will the BOE cut rates soon? He has added that the bank has the equivalent of 250 basis points of policy space and that additional Quantitative Easing is also on the cards.

Sterling had been on the back foot before Carney’s carnage. The desert storms came and have probably gone – but Brexit uncertainty has continued dragging the pound down.

Michel Barnier, Chief EU Brexit negotiators, has said that there cannot be a trade deal without tackling fisheries and setting a level playing field with the UK. The French statesman has also reaffirmed the EU’s stance that the timeframe to reach a deal – by the end of this year – is “hugely challenging.”

Barnier and Ursula von der Leyen, President of the European Commission, met UK Prime Minister Boris Johnson in London and raised the same doubts. The House of Commons is advancing the Withdrawal Bill, allowing the EU to exit on January 31. However, most EU rights and obligations continue through the transition period which expires on December 31. Britain has until July to ask for an extension – but the PM vowed not to ask for any additional time.

Uncertainty is weighing on the pound the calm in the Middle East is unable to push the dollar lower. President Donald Trump promised new sanctions on Iran but refrained from ordering new military action in response to Iran’s attack on American bases in Iraq. Tehran’s missiles did not cause any casualties. Markets reacted positively to the defusion of tensions but the safe-haven dollar remained in demand for another reason 0 the strength of the US economy.

The ADP jobs report for the private sector beat expectations with 202,000 jobs gained in December – on top of an upward revision for November. The figures raise expectations for Friday’s all-important Non-Farm Payrolls report and join upbeat services sector numbers. 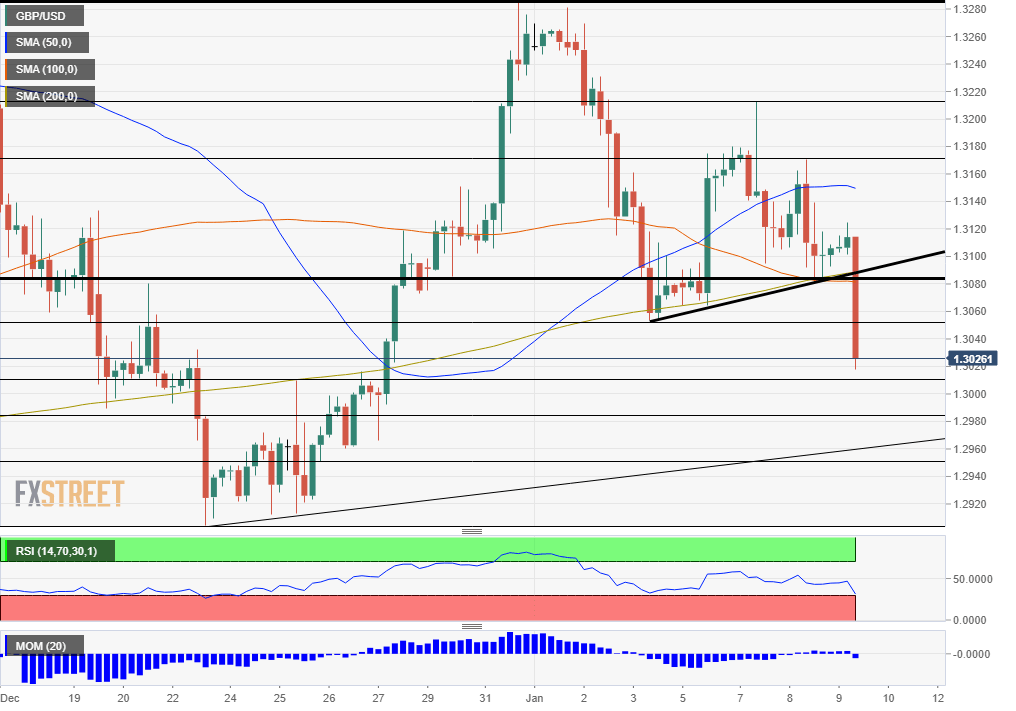 GBP/USD has dropped below a critical confluence line – an uptrend support line that accompanied it since the beginning of the year and the place where the 100 and 200 Simple Moving Averages on the four-hour chart hit the price – at 1.3085.

Pound/dollar is trading below the 50 SMA and momentum turned negative.