Latest
You are at:Home»Forex News»GBP/USD tries to recover but faces Powell

GBP/USD has barely escaped the abyss of reaching the lowest in over two years – but no dangers await. Tuesday’s mix of worries around Brexit sent cable to 1.2439 – only one pip above the 2019 low of 1.2438 recorded in January. A fall to 1.2437 would have represented the lowest levels since 2017.

Today’s data has already provided an excuse for a much-needed recovery. May’s GDP read came out at 0.3% – as expected – and that was enough to spark a run higher. Manufacturing production has fallen marginally short of expectations with an increase of 1.4%.

Boris Johnson and Jeremy Hunt – which are vying to become Prime Minister – have clashed on a television debate. Johnson stressed the importance of leaving by the October 31st deadline and opened the door to bypassing parliament. In the meantime, the House of Commons narrowly voted in favor of a bill that would prevent the government from overriding parliament – the battle is far from over.

Johnson refused to commit he would quit if that did not happen The former foreign minister continues leading the polls and will likely enter 10 Downing Street by the end of July.

The focus now shifts to the Fed. Jerome Powell, Chair of the Federal Reserve, will testify on Capitol Hill and is set to shed light on future monetary policy. Markets currently expect Powell to confirm a one-time rate cut. If he refrains from such a commitment – defying President Donald Trump’s wishes – the greenback would soar. If he expresses concern about subdued inflation and global growth – opening the door a series of rate cuts – the greenback could rise.

The central bank releases Powell’s prepared remarks at 12:30 GMT. His lengthy testimony begins at 14:00 GMT. The Fed’s meeting minutes from the June meeting are due at 18:00 GMT – extending the bank’s impact on markets.

Overall, the Fed is set to dominate today, temporarily putting Brexit on the back burner. 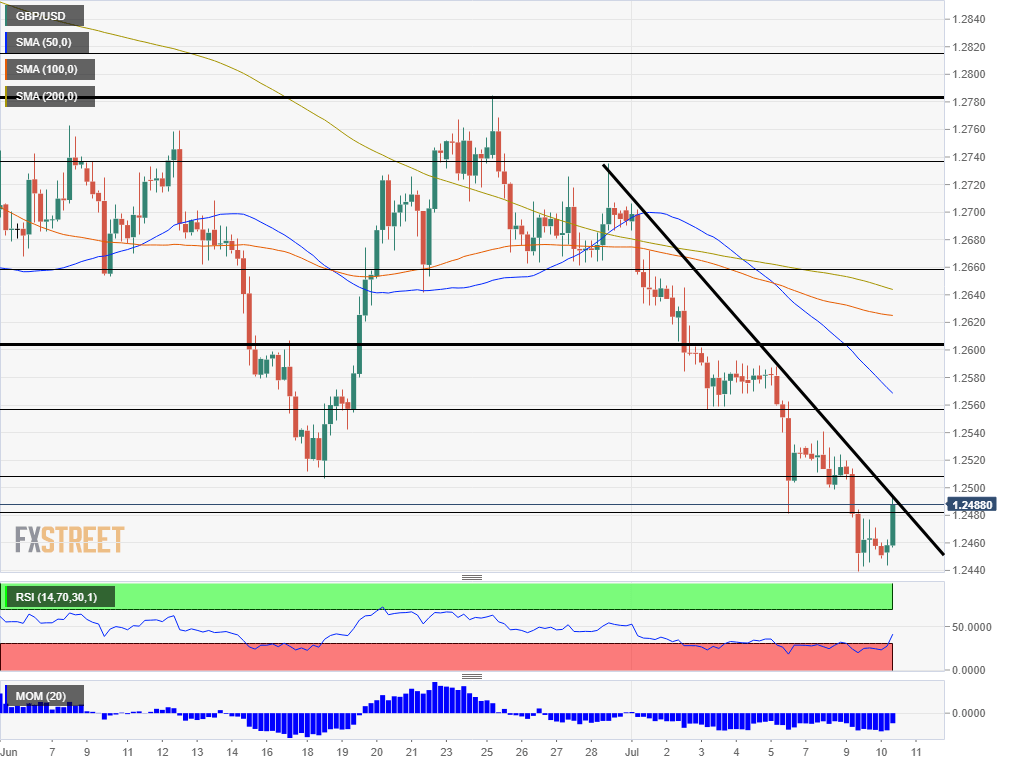 Pound/dollar is capped by downtrend resistance which has been formed in late June. It has touched the price four times, making it significant. The pair is trying to break above it at the time of writing.

The Relative Strength Index (RSI) on the four-hour chart has risen above 30 – shrugging off oversold conditions – and opening the door to fresh falls.

Resistance awaits at 1.2505 which was June’s low, followed by 1.2560 which was the trough in late May, and then by 1.2605 worked as both support and resistance in recent months.

Get the 5 most predictable currency pairs
Previous ArticleWTI hits fresh weekly highs above $ 59 ahead of EIA data
Next Article Italy: Industrial production rebounds in May – ING