In a previous publication, A Clockwork Trade, 27 May 2015 I had pointed out that the Swiss export economy was threatened by its reputation as a financial safe haven. In particular, capital inflows into Swiss assets caused the Swiss Franc to become, in the words of Swiss National Bank Chairperson Thomas Jordan, “significantly overvalued”. By the beginning of June, the overnight repo rate at that time was -0.74%, the 3 month Franc LIBOR was at -0.79 and the yield on the 10 year bond, -0.03%.

Also at that time, the Bank of England was on the disinflation borderline, recording a recent ‘inflation rate’ at 0.0% in spite of efforts to attain a target inflation rate of 2.0%. The current bank rate was 0.5% and the BOE was still engaged with its bond purchasing program totaling £375 billion at the end of May. Some weeks before the BOE reduced its growth forecast to 2.5% for 2015 and to 2.6% for 2016 down from a 2.9% forecast for the next two years . The SNB had forecast CPI to decline to 1.1% in 2015 after the largest reported decline, 4.6%, in over a decade. The deflation concerns were far more serious in Switzerland than in the UK.

Surprisingly, in mid-May, both France and Italy ‘toed-the-line’ reporting better than expected growth picking up the slack for as Germany reported weaker than expected growth helping EU GDP gain 0.4%, in line with estimates . Over the next few weeks the optimism would be tempered as Mr. Draghi publically stated the need for economic reform throughout Europe and that high unemployment as an obstacle to future growth.

At this point it should be observed in the EUR/CHF – EUR/GDP comparison chart the two pairs followed similar patterns up until about the beginning of June. Three events began to converge: the Greek-ECB standoff was still at an impasse, China’s economy was continuing to slow and SNB concerns over a too strong Franc. SNB Chair Thomas Jordan went so far as to publically warn that the SNB would act if the Franc continued to strengthen. EUR/CHF trading became erratic, without a clear pattern whereas the GBP smoothly rode the wave and strengthened over the month of June. FX markets were rife with SNB intervention rumors and indeed by the end of June, Chair Jordan confirmed that the SNB did intervene over the 27-28 June weekend
However, in mid-May, the ECB-Greek debt standoff was still far from any ‘high noon showdown’ and both the SNB and BOE were trying to weaken their respective currencies. Also, ECB president Mario Draghi had recently expressed confidence that the extraordinary measures initiated in early March, at â‚¬60 billion per month were beginning to show positive results. 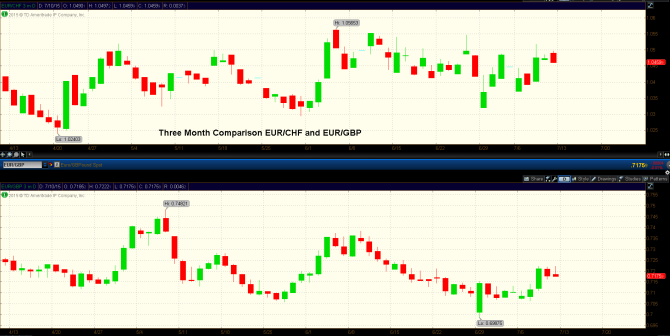 At the June meeting the BOE decided to hold the benchmark bank rate at 0.5% . That policy rate had been in place for nearly six years. More importantly, the recent elections had returned the conservatives to office, thus clearing the way for a referendum on Britain’s continued membership in the EU.

The SNB actions of January, sharply strengthened the Franc may have begun to fade, however the strong Franc was still a millstone tied to an economy dependent on exports. After several months of weakness, the May reading of Swiss PMI inched a bit higher than had been expected, just shy of an expansionary reading . Pressure had been mounting on the SNB to do more as the significantly strong Franc was slowing the export dependent economy; however the SNB held its policy ground . 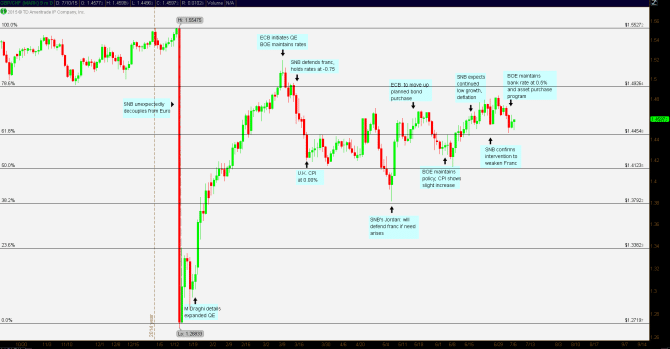 The UK economy recorded positive inflation results with May CPI coming in at 0.1% although the reading might have reflected a recovery in energy prices. At the SNB June meeting, the SNB reported -1.0 inflation vs a forecast of -1.1 and maintained the benchmark rate of -0.75% and a GDP contraction of 0.2% in Q1.

Once again, it might boil down to ‘safe haven’ inflows. China’s economy was continuing to show signs of weakening and the recently reelected conservative British government implied that the EU referendum might lead to a “Brexit”. If an election result may be tied to an FX market, the reelection of the conservative might have boosted confidence that, if not an all-out Brexit, then at least concessions may be obtained from the EU that would favor the UK economy.

Because of low inflation and extreme exogenous events, in particular a sharply correcting Chinese stock market coinciding with a slowing economy and the ECB-Greek standoff approaching critical juncture money will flow towards safe havens. For instance, German Bunds and US Treasuries have gained considerably over the past few weeks. The same may be true of the Swiss Franc and the Great British Pound as investors pile into British Gilts and Swiss bonds. However, SNB Chair Thomas Jordan has been signaling all along that the Franc is far too strong and will no doubt vigorously intervene.
As previously noted, both the UK and Swiss economies hardly intersect. So it isn’t a direct matter of GBP vs CHF. It’s more of where the flow will be directed should the Euro weaken further. The SNB is ready to defend the currency. Hence, it’s reasonable to expect the SNB to react far more strongly and decisively to exogenous events than the BOE needs to.

“CFDs, spread betting and FX can result in losses exceeding your initial deposit. They are not suitable for everyone, so please ensure you understand the risks. Seek independent financial advice if necessary. Nothing in this article should be considered a personal recommendation. It does not account for your personal circumstances or appetite for risk.”

In our latest podcast, we drill down the deals, the aGreekment and Iran and the market impact. 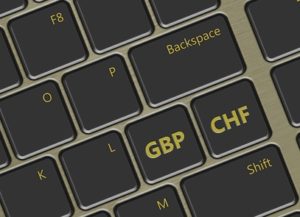 In a previous publication, A Clockwork Trade, 27 May 2015 I had pointed out that the Swiss export economy was threatened by its reputation as a financial safe haven. In particular, capital inflows into Swiss assets caused the Swiss Franc to become, in the words of Swiss National Bank Chairperson Thomas Jordan, "significantly overvalued". By the beginning of June, the overnight repo rate at that time was -0.74%, the 3 month Franc LIBOR was at -0.79 and the yield on the 10 year bond, -0.03%. Also at that time, the Bank of England was on the disinflation borderline, recording a…