A very busy week expects pound traders – inflation and employment figures are the highlights. Here’s an outlook for the British events, and an updated technical analysis for GBP/USD. 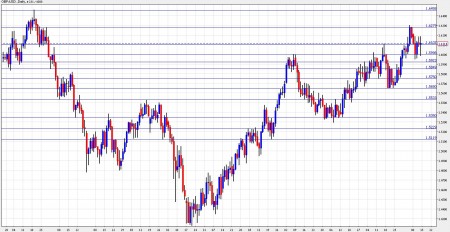 The pound showed significant strength in the past week, weathering the dollar’s storm. This came despite weak figures in Britain such as manufacturing production and consumer confidence that disappointed. Will this continue? Let’s start:

At the beginning of the week, cable fell and dipped under 1.60, It later recovered and managed to settle and close above the 1.0107 line (mentioned last week). At 1.6114, its weekly loss is rather modest.

Looking up, 1.6280 remains the strong and immediate resistance, as it did at the beginning of the year. The next resistance line is found at 1.6450, which was a peak around the same time.

Looking down, 1.6107 was the peak a few weeks ago, and is immediate, yet weak support. The round 1.60 line is still an important support line. Below, 1.5923 is the next minor support line.

Lower, 1.5850 served as a pivotal line several times in the past weeks’  choppy  trading. It’s followed by 1.5750. Stronger support is found at 1.5650 which was a stubborn support line a few weeks ago.

Even lower, 1.5530 capped the pair in April and worked as resistance not so long ago.  It’s followed by 1.5230 – a stubborn resistance line back in July. The last line for now is 1.5120, that first served as resistance in June and then worked as support in July.

I remain neutral on GBP/USD.

While many indicators showed weakness in the British economy, Irish problems could affect Britain and unemployment isn’t going down, the chances of a rate hike are still high.

A very busy week expects pound traders - inflation and employment figures are the highlights. Here's an outlook for the British events, and an updated technical analysis for GBP/USD. GBP/USD daily chart with support and resistance lines marked. Click to enlarge: The pound showed significant strength in the past week, weathering the dollar's storm. This came despite weak figures in Britain such as manufacturing production and consumer confidence that disappointed. Will this continue? Let's start: Rightmove HPI: Monday, 00:00. This is the earliest house price report in the UK. and is also released very early in the weak, providing an…