Global risk appetite looks like it will have trouble continuing along the positive trajectory posted yesterday, with equities ending the Asian session mixed and the guarded price action escalating during the European session and ultimately driving S&P futures lower before the opening bell.

Chinese Premier Li Keqiang raised a red flag yesterday evening when he commented in a speech that outstanding M2 money supply in China had gotten to stretched levels, and to expand credit supply further by printing more money would lead to inflation – something the Chinese government vehemently wants to avoid.   The remarks continue to highlight the government’s emphasis on quality of growth as opposed to a credit-fueled lending boom, a path unlikely to see China get back to double-digit growth in the near future.

Regional equities in Asia were mixed as their session came to a close, with the Nikkei bouncing off its lows to close up by 0.2%, while the Hang Seng dropped by 0.65%.   The commodity complex is essentially flat, with the yellow metal putting in some modest gains as Gold trades at $1,317/ounce, while front-month WTI slides by 0.16% to trade hands south of the $94.50/barrel mark.

The Loonie is on the defensive this morning, trapped within a tight range during overnight trade; USDCAD is pivoting just south of the 1.0450 level, and we expect the recent range of 1.0380-1.0480 to hold through the beginning of the week.

The overnight session was a bumpy one for the Aussie, with the Antipodean currency giving back a fair amount of its gains from  Monday  after the Reserve Bank of Australia zeroed in on its domestic unit to try and talk it down from its lofty heights.   As expected the RBA refrained from altering its overnight lending rate of 2.5%, continuing to forecast the accommodative policy actions from earlier in the year will still have positive effects as they work their way through the economy.   While remaining neutral in regards to the direction of a future amendment in the cash rate, as opposed to the dovish bias earlier in 2013, the RBA did key in on the Australian currency, warning that the elevated heights were uncomfortable from the central bank’s perspective, and that a lower exchange rate would be “needed to achieve balanced growth in the economy.”   The Aussie initially slid below the 0.9500 handle against the USD after the announcement, but has since managed to claw its way back into the green, with AUDUSD grinding through bids to trade in the mid-95s.

Cautious investor sentiment across the Atlantic had led to major European indices trading in the red midway through their session, under pressure after the EU trimmed its 2014 GDP growth forecast from 1.2% to 1.1% while raising the estimated unemployment rate from 12.2% to 12.2%.   Elsewhere in the common-currency bloc, Spanish unemployment figures showed that the jobless total rose by just over 87k during the month of October, worse than analysts had been expecting to see.   While the seasonal factors such as the end of tourism season are somewhat to blame, the soft numbers cast doubt as to whether Spain can turn the corner, and increases the case for the ECB to do more to support the recovery in the zone.   The downbeat economic stats out of the EU come just ahead of the ECB rate decision  on Thursday  morning, where falling inflation (reports this morning showed producer prices dropped 0.9% compared to September of last year) and lagging growth has fueled speculation ECB head Mario Draghi may hint at more accommodative monetary policy options during the press conference, with a cut in the refi-rate not necessarily off the table.   The EUR is down marginally against the big dollar, putting in work south of the 1.35 level, while the FTSE, Dax and Stoxx off by 0.53%, 0.47%, and 0.8% respectively.

Heading into the North American open, as equity futures languish in the red, the ISM Non-Manufacturing PMI for the month of October in the US is due at  10:00am EST.   After the equivalent survey on purchasing managers in the manufacturing industry released last week showed the industry was on firmer ground than expected, the service sector is still expected to see a modest decline from the 54.4 registered in September.   After easing yesterday from its recent run in late-October, a stronger than expected print (>54.0) could boost the DXY’s already robust momentum, as traders gauge the strength of the US economy in the wake of the government shut-down, and if the economy could weather a taper by the end of the year.   While not as important as GDP or the Non-Farm Payroll report at the end of the week, the ISM Non-Manufacturing PMI has the ability to set the tone of the trading day due to an otherwise light economic calendar.

For Loonie traders, while the ISM PMI number set to be released shortly has the ability to impact USDCAD on the basis of a meaningful deviation from expectations will influence risk appetite, domestic economic releases are set to hit the wires first thing  tomorrow.   The Ivey PMI survey will be of notable importance heading into the end of the week when we get Canadian unemployment numbers, with the employment sub-index having strengthened materially in September from the dreary 43.6 witnessed in August.   The broad diffusion index is forecasted to print at 54.7 and if it comes in as expected, would mark the fourth straight increase in as many months, with the last three showcasing an economy in expansion mode.   A better than forecast reading for the Canadian economy would give corporations naturally short USD a brief reprieve to potentially cover off some near-term exposure, with a positive print piggy-backing on the strong GDP data witnessed last week.   Demand for USD will most likely soak up excess supply if USDCAD falls into the high 1.03s; be sure to speak with your dealing teams in order to strategize about positioning heading into the latter half of the week, as the combination of external and domestic data releases can potentially create some volatile trading conditions. 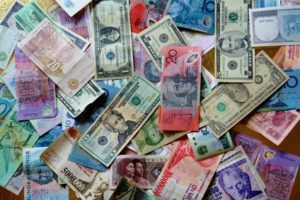 Global risk appetite looks like it will have trouble continuing along the positive trajectory posted yesterday, with equities ending the Asian session mixed and the guarded price action escalating during the European session and ultimately driving S&P futures lower before the opening bell. Chinese Premier Li Keqiang raised a red flag yesterday evening when he commented in a speech that outstanding M2 money supply in China had gotten to stretched levels, and to expand credit supply further by printing more money would lead to inflation - something the Chinese government vehemently wants to avoid.   The remarks continue to highlight…