As per the prior analysis, Gold Price Analysis: XAU/USD correction on the cards towards $1,830, the market has indeed moved into the prior support area.

At the time of writing, gold is trading at $1,836.00 and up some 1.27% on the day, so far, with the US dollar on the back foot to start the week following last week’s disappointment in the US Nonfarm Payrolls economic event.

Precious metals prices are firmer as inflation expectations continue to underpin the market and weigh on the greenback.

”The weak NFP print helped build a margin of safety above the CTA threshold for short acquisitions, easing concerns on deeper liquidations in gold,” analysts at TD Securities argued who argue gold prices have yet to reflect the massive rise in money supply.

”We find that gold’s current valuation is nowhere near the highs experienced at and around previous cycle highs, suggesting that a slump in prices won’t mark the end of gold’s bull market.”

A case for USD strength

However, it is not all doom and gloom out there for the US dollar.

While the Nonfarm Payrolls has shaken out less committed longs in the US dollar, there was still a glimmer of hope in the report. Moreover, other data was strong.

However, updated population estimates were added to the household survey data.

While those additions meant the estimated size of the labour force fell 206k and unemployment fell 586k, other data show signs of improving momentum in the US.

For instance, initial jobless claims fell for the third straight week, and the ISM manufacturing and service surveys were solid.

This data will come before the Federal Reserve’s Chair Jerome Powell who speaks to the New York Economic Club.

Powell’s view on medium-term outlook has likely improved from the January FOMC meeting given recent fiscal developments as well as signs that the coronavirus threat is starting to abate.

Positivity rates are improving, with 14 states reporting rates of >10%, which is down from 19 a week ago, analysts at ANZ bank explained.

”According to the CDC around 59m vaccine doses have been distributed as of 6 February,” the analysts added, which is about 10% of the population.

This is a significantly faster pace of vaccine rollout than any other major economy. To the extent that this divergence continues, it could help the dollar rally further.

Meanwhile, the Senate and has House passed a budget resolution plan that should allow President Biden’s relief package to pass Congress in the coming weeks without Republican support.

”We anticipate Congress should pass the majority of the measures by budget reconciliation by early to mid-March just prior to the expiry of the latest round of assistance to unemployment insurance. The total package could exceed USD1.5trn,” the analysts at ANZ explained.

The good news in progress for the economic outlook attracts investors into US assets over those elsewhere.

Expectations about the relative pace of monetary policy normalisation in the US and the rest of the world might shift in favour of the dollar.

However, last week, Fed speakers pushed back on taper talk and the dollar was pressured as a result.

In the prior analysis, it was presumed that the price of gold would correct back to the prior support structure before it could be extending to the downside:

It was explained that the target could be achieved in a trade set-up on the hourly time frame: 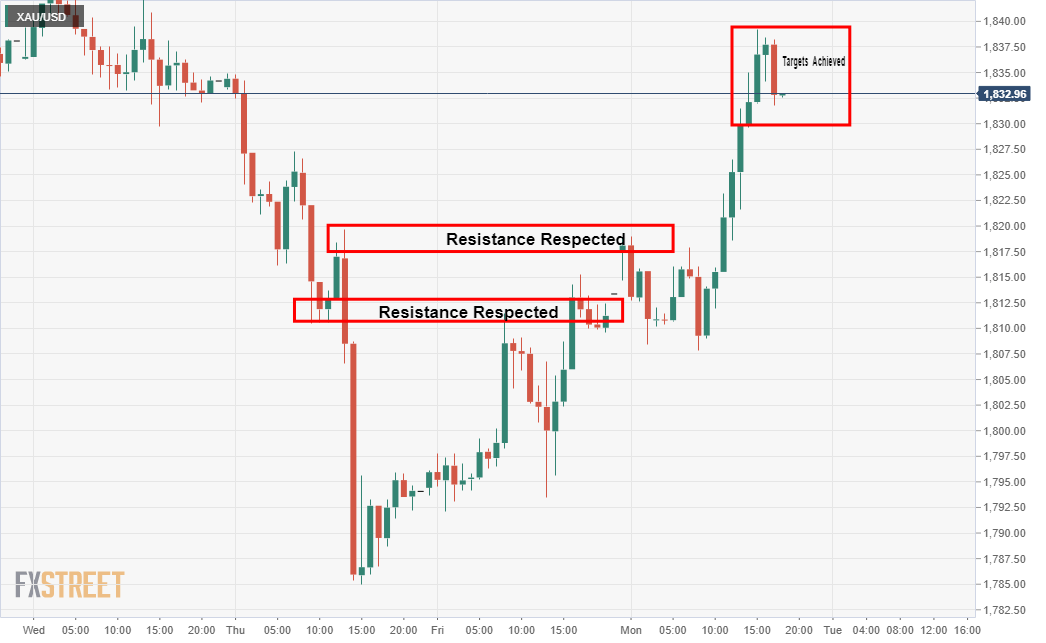 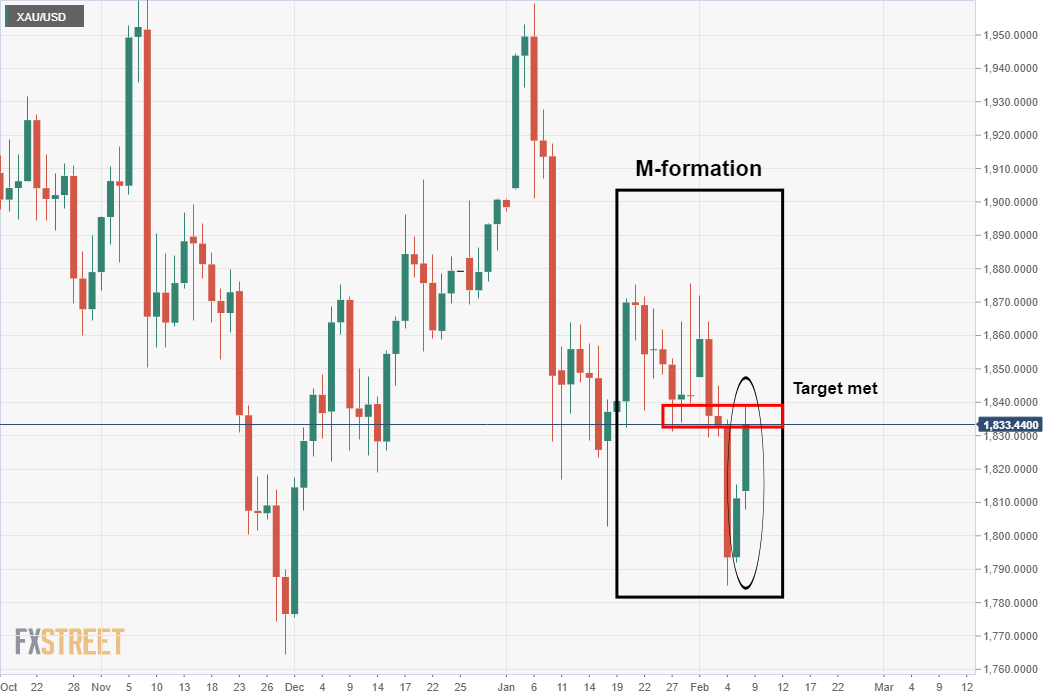 At this juncture, the markets will be looking to this week’s US Consumer Price Index data which could be the nail in the coffin for the USD if we see an above-consensus read.

This will be expected to have a negative impact on US real rates and weaken the greenback.

From a technical perspective, the gold price is leaning bullish on the longer-term time frames, but there could still be some downside to come while the US dollar tries to hang-on and battles back lost ground. 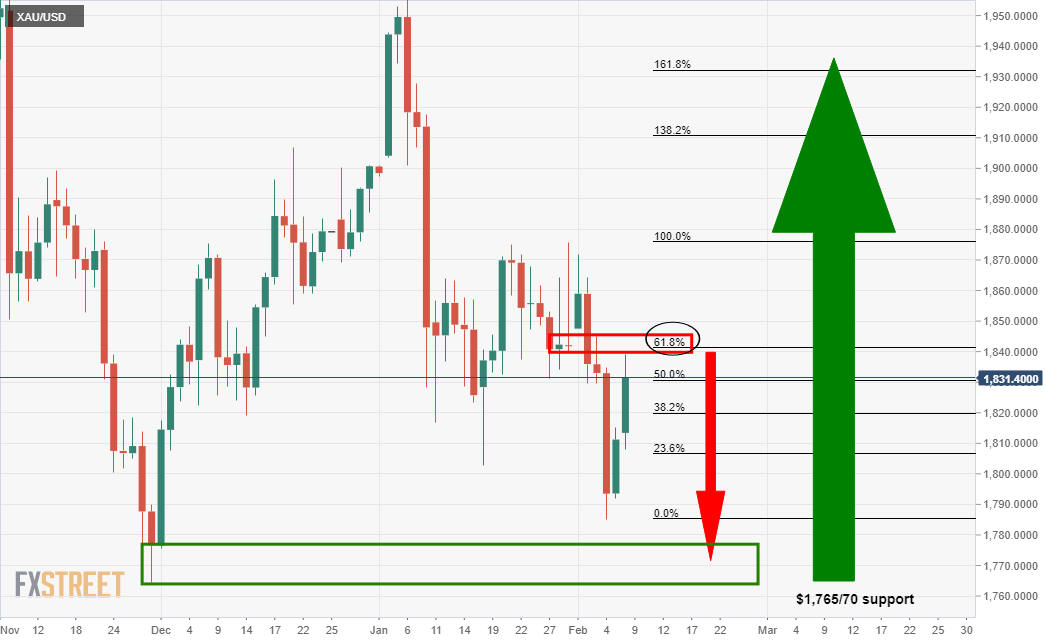 There is room for another test of weekly support in the $1,765/70 area if the resistance holds up.

The weekly chart is not convincingly penetrating support: 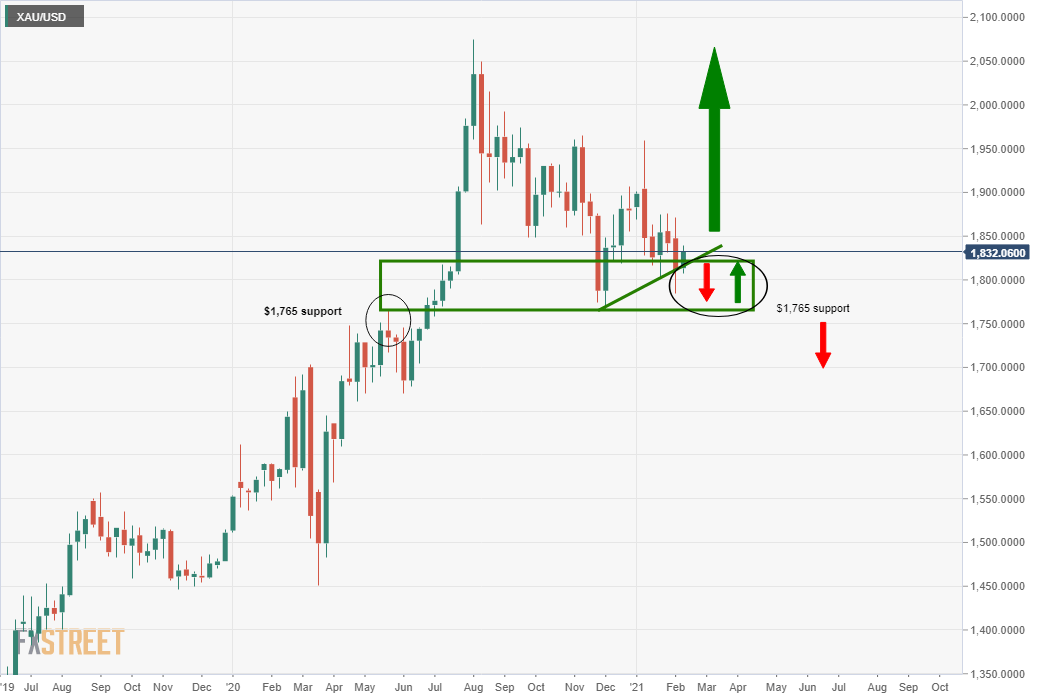 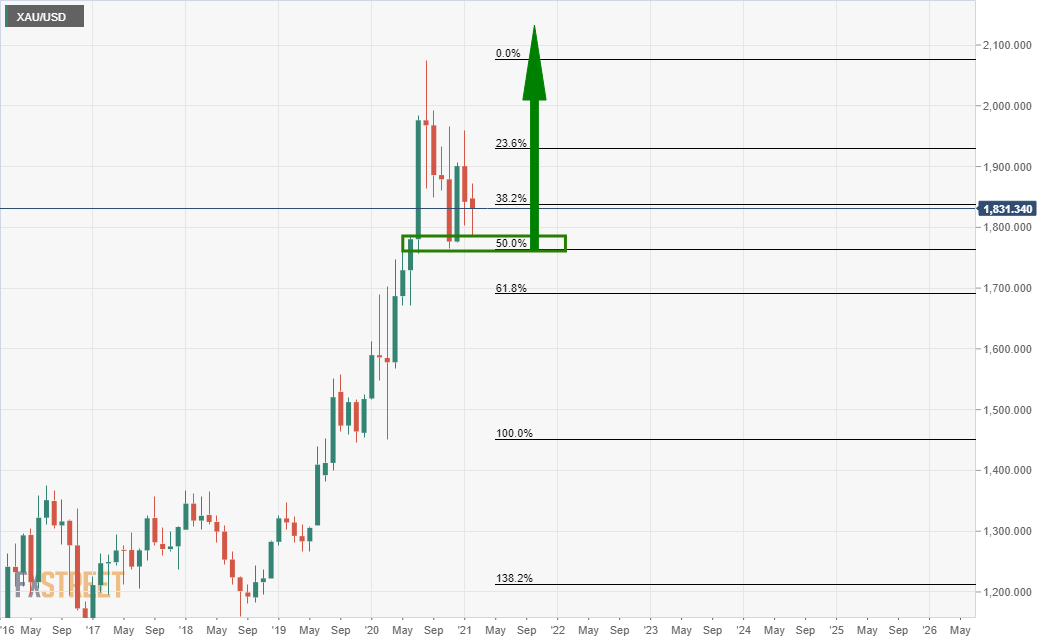 The bulls are active from a 50% mean reversion on the monthly time frame and an upside continuation should be expected.

EU’s Dombrovskis: European economy to return to pre-crisis levels in 2022

Gold prices are testing a critical resistance on the daily time frame.  All eyes will be on the US CPI data this week.  As per the prior analysis, Gold Price Analysis: XAU/USD correction on the cards towards $1,830, the market has indeed moved into the prior support area. At the time of writing, gold is trading at $1,836.00 and up some 1.27% on the day, so far, with the US dollar on the back foot to start the week following last week's disappointment in the US Nonfarm Payrolls economic event. January Nonfarm Payrolls rose a disappointing 49k and December’s Job Losses were revised…