Gold attracted some dip-buying near the $1808 area and turned positive for the second consecutive session on Monday. The uptick pushed the commodity to two-day tops, around the $1823 region during the mid-European session.

With the latest leg up, the XAU/USD has now found acceptance above the $1820 confluence hurdle – comprising of 38.2% Fibonacci level of the $1876-$1785 recent downfall and 100-hour SMA. A sustained move beyond might have already set the stage for an extension of the ongoing recovery from two-month lows set last Thursday.

Meanwhile, technical indicators on the 1-hourly chart have been gaining positive traction and have just started moving into the bullish territory on the 4-hourly chart. The set-up supports prospects for additional intraday gains, though bearish oscillators on the daily chart warrant caution for aggressive bullish traders.

Hence, the recovery momentum might confront stiff resistance and remain capped near a previous strong horizontal support breakpoint near the $1830 region. Any subsequent move up runs the risk of fizzling out rather quickly near the 61.8% Fibo. level, around the $1840-42 zone, which should act as a key pivotal point for short-term traders.

On the flip side, the 23.6% Fibo. level – just ahead of the $1800 round-figure mark – now seems to have emerged as immediate support. Failure to defend the mentioned support level might turn the XAU/USD vulnerable to accelerate the fall back towards challenging last week’s swing lows support, around the $1785 region. 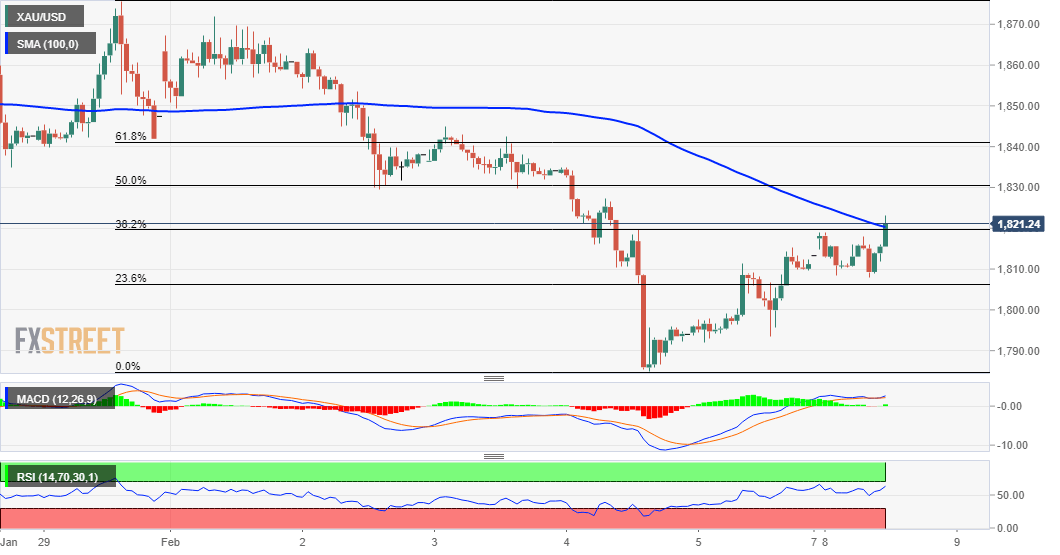