Bitcoin whales have for a long time been linked to price actions in the market. When these large volume holders buy more BTC to hold, prices tend to rally. On the other hand, an exodus of the whales culminates in appreciable price drops. Therefore, it is vital to investigate the whales’ activities and determine how investors can formulate robust strategies to remain profitable.

Bitcoin whales holding 1,000 BTC and more currently take up 42.56% of the total supply. According to on-chain data by Santiment, the swing to the record high of $58,000 in February was directly impacted by whales owning 43.29% of the total supply. Besides, this was a 54-week high. Another surge above 43% would predict another rally in the price of Bitcoin. 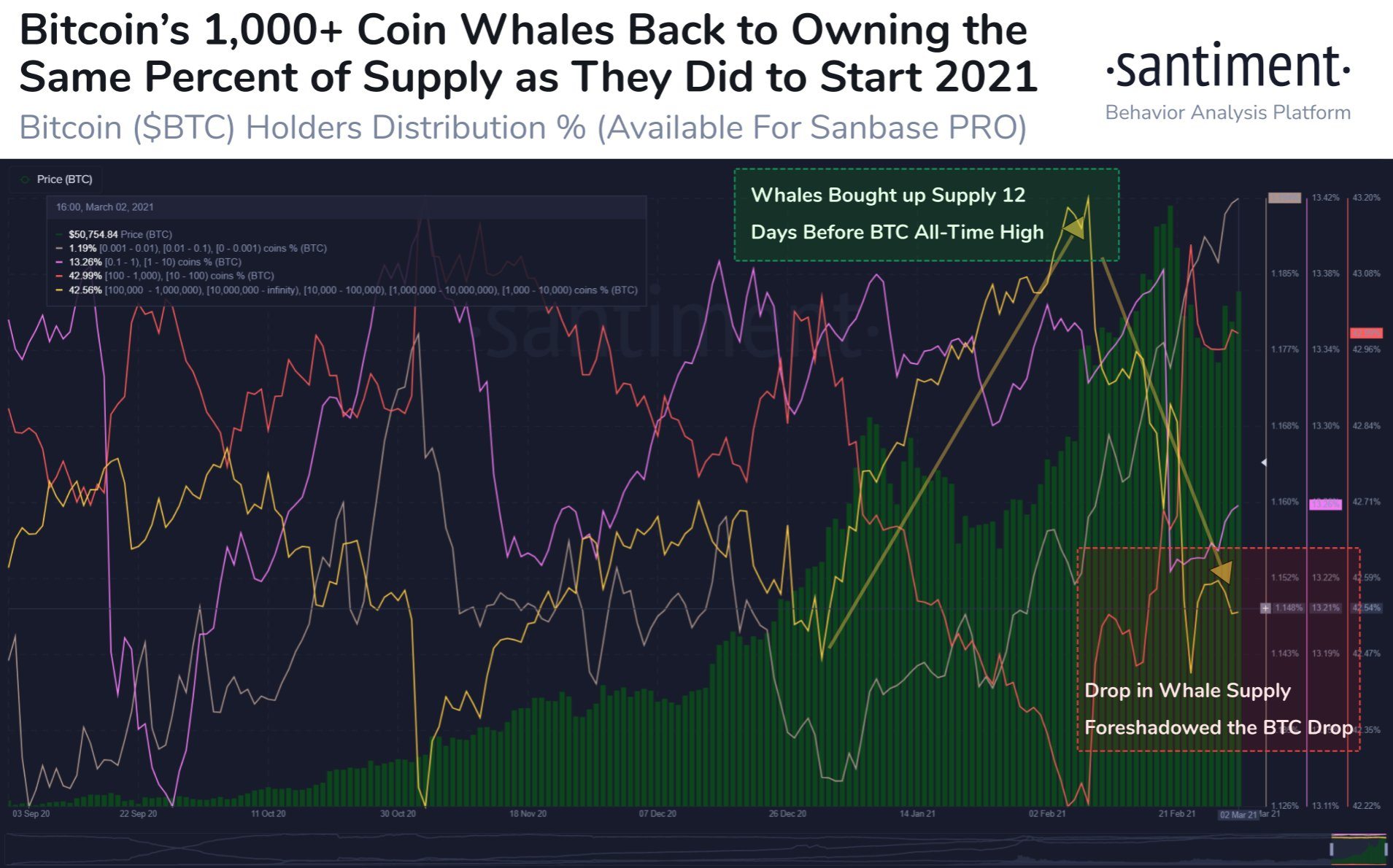 Bitcoin holders with more than 1,000 coins

Scaling down to the whales holding between 100,000 and 1 million BTC confirms the narrative that accumulation is a direct indicator of a bull rally. For instance, the whales in this range increased from only one on January 30 to three by the time Bitcoin hit the record high. Following one of the whales’ exit, overhead pressure started to mount, whereby BTC tumbled to $42,800.

A similar upswing was reflected in the number of addresses holding between 1,000 and 10,000 BTC. However, the number of whales in this zone increased appreciably since September 2020 and topped out at 2,390 in the first week of February.

The daily chart illustrates the remarkable upswing to $58,000, which occurred in tandem with the whales’ increasing dominance to 43.29% of the total supply. The SuperTrend signal presented a buy signal on the same chart, suggesting, Bitcoin was about to take a swing higher. This also shows that technical indicators can be used in conjunction with whale activity to foresee future price actions.

A comprehensive look at the whale activity toward the end of 2018 and the first quarter of 2019 echoes the idea that an appreciation in whale activity positively impacts the price of Bitcoin. The chart below shows that all the whales holding 1,000 BTC and above improved consistently from December 2018, when the flagship cryptocurrency dropped to lows of $3,150. The uptake of the pioneer cryptocurrency continued into August, with Bitcoin price hitting highs above $12,000.

At the time of writing, Bitcoin is trading at $49,600 after facing another rejection at $52,000. Overhead pressure seems to be increasing in the wake of losing the 100 Simple Moving Average support on the 4-hour chart. If bulls fail to hold above $489,000, the bearish leg could extend to $48,000, support highlighted by the 50 SMA. More buyers are expected to enter at this level, which may add pressure to the tailwind.

The Moving Average Convergence Divergence (MACD) still has a bullish impulse; therefore, BTC is likely to stay afloat and resume the uptrend above $50,000. Action past $52,000 (stubborn resistance) will trigger more buy orders as investors look forward to the record high and $60,000, respectively.

A surge in Bitcoin whales holding more than 1,000 coins above 43% of the total supply hints at a potential upswing. An increase in whale activity has had a direct positive impact on Bitcoin price in the past. Bitcoin must reclaim the position above the 50 SMA and $52,000 to sustain the uptrend to $58,000. Bitcoin whales have for a long time been linked to price actions in the market. When these large volume holders buy more BTC to hold, prices tend to rally. On the other hand, an exodus of the whales culminates in appreciable price drops. Therefore, it…