There’s been a lot of push back from the crypto community against the winds of change in the form of bitcoin SEC regulation.

Many understandably worry that US regulators and policymakers are inn danger – unwittingly or otherwise – of flicking the kill switch on crypto.

First there is the insertion of crypto regulatory provisions in the infrastructure bill currently before the US Congress, with its initial language suggesting that all corporate entities (not just exchanges) that handle crypto transactions would have to abide by strict “travel rules” governing the ID of senders and recipients of crypto transactions in addition to the taxing of those flows.

In the latest iteration of the bill, the language has been changed to limit those measures to exchanges, but that is unlikely to be the end of the story given the rare bipartisan agreement that exists between Republicans and Democrats on the need for crypto regulation.

The Congress-induced angst was quickly followed by the bigger headache presented by Gary Gensler, the incoming chairman of the Securities and Exchange Commission (SEC), who confirmed in an interview with Bloomberg and a major speech at the Aspen Security Forum, that the agency will move forward with regulations to protect investors in the crypto space, although no timetable has been communicated as yet and digital assets may not be at the top of his in-tray.

Specifically, Gensler has called for Congress to pass a law to explicitly authorise the SEC to regulate crypto.

Making a bitcoin price prediction is fraught with uncertainties but in terms of fundamental analysis regulation is boon for bitcoin, although that may not work out for certain key players on the landscape today, such as Binance and Bitfinex (i.e. Tether).

Here’s five reasons bitcoin SEC regulation will massively boost the price of bitcoin and many other digital assets besides.

1. Freeing bitcoin and crypto from the cowboys

Gensler used to teach crypto in academia and as such was thought to be much more amenable to crypto than his predecessor. Gensler now describes himself as “neutral” on the technology, determining that for it to fulfil its promise of revolutionising finance and industries, it first needs to brought into the mainstream and for investors to be protected. But that is a plus – he is not seeking to kill crypto with his bitcoin SEC regulation proposals, but rather to free it from the cowboys.

“It’s only with bringing things inside—and sort of clearly within our public policy goals—that a technology has a chance of broader adoption,” explains Gensler.

He adds: …“[regulation is]the only real viable path forward for this nascent technology”. As the person responsible for setting up the crypto programme at MIT, Gensler should know.

Exactly how the SEC will proceed was hinted at when Gensler confirmed to Bloomberg that the Commission was looking at least seven areas of interest: initial coin offerings, trading venues, lending platforms, DeFi, stablecoins, custody, ETFs and other collectives.

DeFi seemed to have got caught up in the oversight proposals being drafted into the infrastructure bill, but that may have been headed off at the pass by some deft lobbying by the crypto industry, but exactly such networks and tokens should be regulated is yet to be determined.

Will DeFi protocol creators be required to take on liability risk arising from market activity? Will only banks – or entities with bank charters – be allowed to issue stablecoins? How will the legal ramifications of NFT ownership models be agreed upon? Should all exchanges be licensed? How will hot wallets be policed? These and many other questions deserve a resolution.

Gensler’s latest comments indicate that the SEC is getting there, slowly but surely. Increasingly crypto investors will need to consider which coins will be the winners and losers as the regulatory picture becomes clearer. If you are on the hunt for the next cryptocurrency to explode check out our guide.

3. Gensler remarks mean a bitcoin ETF is now much closer

Gensler at the Aspen Forum made known his preference for cash-settled futures as the basis of a bitcoin ETF, and that hasn’t gone down well in some quarters.

Matthew Sigel, head of digital assets research at VanEck, which has an bitcoin ETF proposal before the SEC, told Bloomberg: “We see Bitcoin futures-based funds as inferior products that have consistently underperformed the Bitcoin price and bring additional complexities in regards to how they must be managed, at a higher cost than ETFs. Simply put, they are substandard vehicles.”

But you have to start somewhere. Sigel, in his eagerness to get his firm’s bitcoin ETF approved, overlooks the fairly reasonable takeaway from Gensler’s initial remarks, which is that a futures-based bitcoin ETF aligns more closely with the state of play as expected to be in place for the foreseeable future, or at any rate until Congress brings forward legislation that enables the SEC and other regulatory bodies such as derivatives markets policer the Commodity Futures Trading Commission (CFTC), where Gensler was chairman during the Obama presidency, to fully regulate the emergent crypto asset class.

Bitcoin futures already take a regulated form on the CME – as distinct from the unregulated products hawked by the likes of Binance, OKEx and FTX. That means that wrapping up these products inside ETFs automatically provides retail investors with an extra layer of protection, in addition to the mutual fund-standard protection that Gensler envisages for the products.

If you are looking for the best cryptocurrency to buy right now, then check out our guide for 2021.

4. The market gets it: regulation is a good thing

After initially seeming to react unfavourably to the one-two regulatory punch from the infrastructure bill and Gensler combo, the market is finding its feet – or at least not plummeting in the way it did in the wake of the Chinese government crackdown on mining and crypto trading/payments.

Of course the pullback in the market in the past few days may have just been healthy profit-taking after the enormous run-up in the bitcoin price from $29k territory to $42,000, but sellers are likely to have been spurred on by the regulatory siren calls emanating from Washington DC.

There’s a broader point to make about all this though, which is that regulation is a good thing for crypto… at least in the long term.

As Gensler points out, many of the coins on the market today are in fact securities and as such are non-compliant with current laws. Bringing such products into compliance may mean that some will cease to exist or will be forced to change how they work. That’s not necessarily a bad thing.

And reminding investors that there are “significant gaps in the investor protection afforded to you” is no bad thing either as far as bitcoin SEC regulation goes.

If crypto is going to be widely adopted, it needs some rules of the road & a cop on the beat to enforce them.

To be clear, I am technology-neutral.

What I'm not neutral about: Investor protection. pic.twitter.com/e6GsSAyXhB

It might be unpopular to say in some quarters, but Canada is not the USA. Canada has a number of bitcoin ETFs and there have been no problems as yet manifesting themselves in the way of destabilisation and contagion re. the rest of the financial market, but if anything did go wrong the risks are much smaller and easier to contain. Not so the US.

5. Crypto regulation and a bitcoin ETF will unlock a torrent of wealth

There are trillions of dollars in wealth that will be inherited by the younger generations in a process that is just getting underway. Some are calling it the largest wealth transfer in history. The inheritors are much more open to crypto as a legit asset class and if the current profile of retail investors is anything to go by, are likely to commit at least a small percentage of that wealth to bitcoin and digital assets more widely.

But the main obstacle to that happening is bitcoin sec regulation uncertainty. Gensler has signalled that the SEC is committed to ending that uncertainty in such a way that it does not kill off the industry – that’s good news for bitcoin.

US policymakers are behind the curve. China will unleash its digital yuan at the Winter Olympics next year while Europe is moving ahead with a comprehensive regulatory framework. Just last week Germany Okayed certain institutional-level funds – known as Spezialfonds – to hold crypto, up to as much as 20% of their holdings.

Gensler has belatedly signalled that the US doesn’t intend to be left behind, and that is likely music to the ears of family offices and ultra high net work individuals everywhere, as well as you and me (assuming we have boomer parents to inherit from!).

Looking to buy or trade bitcoin now? Invest at eToro! 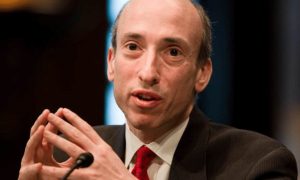 There’s been a lot of push back from the crypto community against the winds of change in the form of bitcoin SEC regulation. Many understandably worry that US regulators and policymakers are inn danger – unwittingly or otherwise – of flicking the kill switch on crypto. First there is the insertion of crypto regulatory provisions in the infrastructure bill currently before the US Congress, with its initial language suggesting that all corporate entities (not just exchanges) that handle crypto transactions would have to abide by strict “travel rules” governing the ID of senders and recipients of crypto transactions in addition…