Global risk appetite was shunned overnight, with fresh trepidations about short-term liquidity in China hampering investor confidence and leading traders to reduce exposure to high-yielding asset classes.   In a move that illustrates policy makers in China are taking note of price increases driving inflation in the region, the central bank refrained from providing liquidity via reverse repos last week, which was estimated at draining 44.5bln yuan from the interbank market.   In addition to the tightening of monetary policy conditions in the region, it was reported that the five largest banks in China wrote off 22.1bn yuan of non-performing loans in the first half of the year, up from the 7.65bn yuan registered in 2012.

The concern for investors is whether the Asian growth juggernaut can navigate through a period of tightening monetary policy conditions in order to combat rising inflation, and if the economy is strong enough to brace itself against a slowdown in credit expansion if banks get more stringent on lending practices.   The liquidity worries sent SHIBOR (Shanghai Interbank Offered Rate) from 3.05% to 3.78% with the Shanghai Comp falling by 1.25%.   While we are still a little ways away from the liquidity crunch seen back in June, the initial moves have investors conscious of how fast liquidity can dry-up in China.   Safe-haven flows were directed into the Japanese yen during overnight trade, with the corresponding yen strength pushing USDJPY into the low 97s ahead of the opening bell in North America.   S&P equity futures are also displaying the sour market feel, with price action telegraphing a negative start to the trading day.   Oil is also suffering on the global growth concerns, with front-month WTI trading giving up 1.71% to trade south of $97/barrel.

Europe is fairing little better midway through its session, with the major bourses printing in the red as risk appetite is scaled back around the globe.   The votes from the last Bank of England meeting were released overnight, and they showed the MPC voted 9-0 in favour of keeping the level of QE and overnight interest rates unchanged.   While the committee remains upbeat about the economic recovery in the UK, and the flow through effects of monetary stimulus beginning to emerge, the MPC was less enthusiastic about the pick-up in productivity around the globe and judged it was not the right time to tighten monetary policy.   Expectations from the board are that the recent strength in the Sterling will keep a lid on inflation, and that it is too early to judge whether the progress around the slack in the labour market is sustainable.   The absence of discussion around the tightening of monetary policy or adjusting the forward guidance knock-out clauses had the Cable has been under pressure for the majority of the European session, sliding back through 1.62 and heading into the mid-1.61s at the time of writing.

The Loonie is weaker ahead of the Bank of Canada rate statement, hindered by the liquidity concerns in China and the potential for a dovish steer from the BoC today.   Overnight interest rate swaps are displaying market participants overwhelmingly expect the BoC to keep the cash rate on hold at 1.0%, and the corresponding monetary policy report will give further insight into how the BoC sees the domestic economy developing over the next year.   Previously, the Canadian central bank has maintained that the gradual normalization of interest rates will be appropriate over time, although the raising of rates will not occur until the current slack in the economy has been removed, which is not likely expected to happen until mid-2015.   The tone of Poloz’s statement has softened from previous releases, and we don’t expect the incoming domestic data (along with the government shutdown and continued sluggish employment situation in the US) to provide the bank with what they require to strike a more hawkish position then we’ve seen in the past, and thus foresee a slight risk to the downside for the Loonie as we head into the release.   USDCAD has established itself above the 1.03 handle this morning, although the pair has run into resistance in the mid-1.03s which corresponds with the Tenkan line and the 50% fib retracement from the most recent drop in USDCAD.   Watch for those to be the key levels to the upside for the pair, with a break bringing the 1.0400 level back into focus.   To the downside, a more hawkish than expected BoC would induce Loonie buying, however support for USDCAD remains at the 200 day moving average of 1.0260.

After the BoC rate statement and press conference, the remainder of the day is devoid of further economic releases, however  tomorrow  morning we will get a slew of PMI data that will shed some light on the current state of the global recovery.   The survey of purchasing manager activity in the manufacturing sector of China is expected to expand from the previous month, coming in with a reading of 50.5.   The flash HSBC manufacturing PMI holds particular importance this month, as rising property values and consumer prices have market participants wondering when the government may have to enact further policies to reign in rising inflation, and whether or not the economy is strong enough to weather a tightening of monetary policy and credit expansion.   A reading north of 50.5 will provide markets with some relief that the rebound is continuing on pace, supporting investor risk appetite on the prospects of global growth.   Currencies like the Loonie and Aussie will garner buying interest, with funds flowing into commodity-linked currencies on the potential for stronger demand from China. 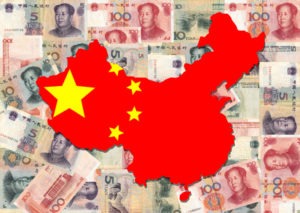 Global risk appetite was shunned overnight, with fresh trepidations about short-term liquidity in China hampering investor confidence and leading traders to reduce exposure to high-yielding asset classes.   In a move that illustrates policy makers in China are taking note of price increases driving inflation in the region, the central bank refrained from providing liquidity via reverse repos last week, which was estimated at draining 44.5bln yuan from the interbank market.   In addition to the tightening of monetary policy conditions in the region, it was reported that the five largest banks in China wrote off 22.1bn yuan of non-performing…