IOStoken (IOST) quickly became a discussion topic this week following its majestic rise despite the downfall witnessed across the cryptocurrency universe. The token rallied over 50% in less than 24 hours from support established at $0.0045 to weekly highs of $0.0075. Unfortunately, $0.0075 marked the end of the rally as buying pressure started to lose traction. IOST is currently trading at $0.0064 after conforming short term support at $0.0060.

The news of IOST token listing on Japan-based Coincheck is likely to have spurred investor interest because it was not just an ordinary listing but also a testament of the protocol’s advancement. IOST is currently an approved cryptoasset by Japan’s Financial Service Agency (FSA) and the Trading platforms supervision Alliance.

On Coincheck exchange, IOST token is the 14th token to achieve compliance while in the entire Japanese market, it comes in the 29th position. IOStoken has since its partnership with Crypto Times, local but renowned media in Japan walked through both major and minor milestones. The goal of the alliance was to gain a local audience and build a community around it. The report is nothing but a success story with the Coincheck listing crowning it all three years later.

It is essential to note that, in addition to the above news, the development team released version 3.3.6 of the network, which mainly focuses on fixing a reported memory-related issue. According to a recently published bi-weekly report, the team has also revised the “DeFi related development plans” and started a program to support “community developers.”

According to data collected and analyzed by LunarCrush, IOST gained tremendously regarding social media mentions from September. Note that the token started trading on Coincheck on September 2, and by September, hit a social volume score of 79, attracting more than 2,400 tweets in one week. At the time of writing, the social volume indicator has fallen to ten, but interestingly, the price has remained relatively higher. 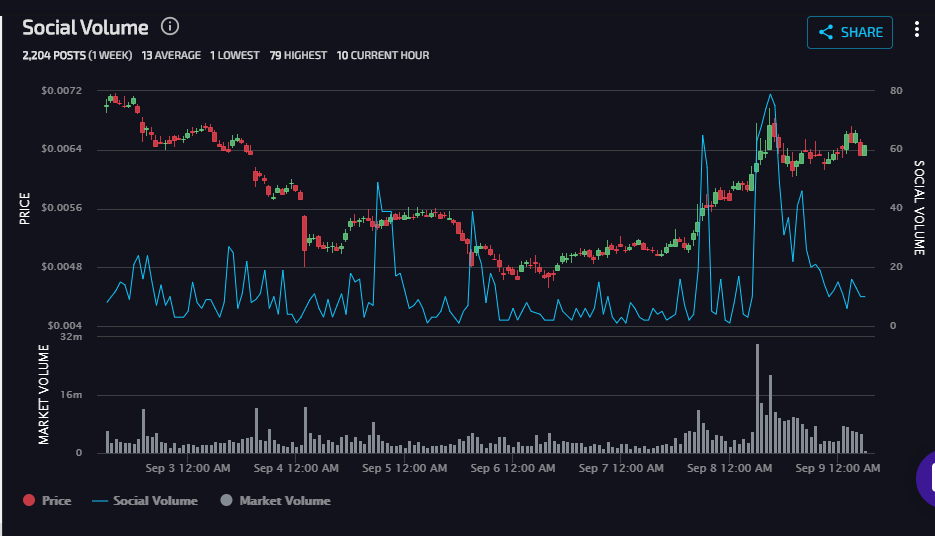 Increased social volume is not exactly an indicator of a sustainable uptrend. However, the mentions on various social media platforms tend to give the token a short-lived pump to a higher price level. It is reflected in IOST’s token barrier at $0.0070 as social volume hit a high at 79. With the social volume currently at ten and the price trading at $0.0064, there is a big chance of the trend building momentum again based on the technical levels and the on-chain metrics.

The 4-hour chart maps out the tremendous progress IOStoken has made since the crash to $0.001363 in March 2020. The most significant resistance at $0.0070 was shattered towards the end of August. IOST/USD traded closer to the levels in February ($0.0086) but only managed to break marginally above $0.0080. The drop from August highs hit pause at $0.0045 after falling below a multi-month trendline.

Recovery from the dip appears to have stalled with $0.0064 functioning as short term support. Meanwhile, the Relative Strength Index (RSI) hit a barrier at 54, leading to an ongoing reversal to the midline. If the RSI holds above 50, consolidation is likely to take over before the token resumes the uptrend. According to the moving averages (50 and 100 Simple Moving Average), the token is somewhat in the bulls’ hands. Unfortunately, the volume is not big enough to support the uptrend, hence the stalling.

IOTS token lands prestigious Japan’s FSA approval highlighting tremendous progress in three years. IOST/USD recovery hits a barrier at $0.0070 as social media volume tumbles from incredible highs. IOST/USD could enter into consolidation before a breakout above the 100 SMA comes into the picture. IOStoken (IOST) quickly became a discussion topic this week following its majestic rise despite the downfall witnessed across the cryptocurrency universe. The token rallied over 50% in less than 24 hours from support established at $0.0045 to weekly highs of $0.0075. Unfortunately, $0.0075 marked the end of the rally as buying pressure started to lose traction.…