MIOTA price has been uneventful over the past three weeks after rallying 116% between July 20 and August 16. This rally saw IOTA flip the 50- and 100-day Simple Moving Average (SMA) from resistance to support. Yesterday, IOTA price bounced off the 100 SMA at $0.9468 to a high of $1.30 recorded earlier today. This rally has seen IOTA gain 27% over the last 24 hours. IOTA’s market capitalization currently stands at approximately $3.51 billion after rising by over 27% over the same period.

On-chain data such as transactional volume usually shows the interest the buyers have in an asset. This is evident with the recent activity related to MIOTA has data from Coinmarketcap shows that IOTA’s daily volume has jumped an impressive 698% over the past 24 hours.

The IOTA foundation also announced that it had joined the Gaia-X community, initiative driven by leading enterprises, research institutions, and the European public sector, aiming to enable secure, open, and sovereign use of data in Europe and beyond. Gaia-X is a federated infrastructure designed to host the next generation of interoperable data exchange and services. Infrastructure components include, but are not limited to: sector-specific clouds; network and interconnectivity providers; and edge devices.

The IOTA foundation gave several reasons for joining the Gaia-X community including:

“As a member of core Gaia-X working groups and a partner in the iECO proposal, we welcome the IOTA Foundation joining the Gaia-X community to jointly drive sovereign data exchange and the next wave of digital innovation in Europe and beyond. The IOTA Foundation’s deep understanding of cutting-edge topics such as DLT and digital identity, paired with our long-standing expertise in enterprise integration and IoT platform provision across the whole cloud-to-edge continuum, will be key to translating the ambitious high-level business requirements of Gaia-X into concrete technical solutions.”

In other news, the IOTA Foundation announced that it was giving their users incentives to run An IOTA Node. In a tweet, the organisation said that this allowed the users to use and benefit from the infrastructure without having to ask someone to do it for them or getting permission from third parties. 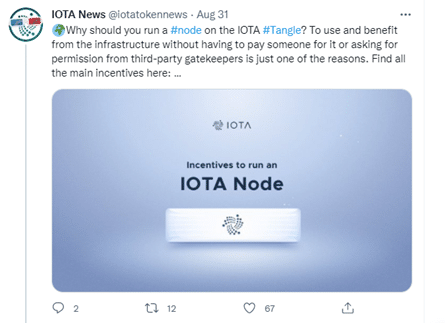 IOTA Price Aims For A 20% Rise

The IOTA price prediction is strongly bullish as buyers are bolstered by the positive fundamentals to push the price higher. At the time of writing, MIOTA is hovering around $1.264 on most crypto trading platforms. IOTA/USD price appears to be battling immediate resistance at the $1.30 level embraced by the 200-day SMA.

Note that MIOTA price needs to rise above this level and flip the 200-day SMA to support in order to sustain the bullish momentum. If this happens, the next logical move will be a rise to the $1.40 psychological level, indicating a decisive upward breakout. This will bolster bulls to push IOTA towards at $1.50, above the June 03 range high. This will represent a 20% rise from the current price.

Technical indicators as seen on the daily chart validate the bullish bias. For example, the upsloping moving averages, and parabolic SAR which flipped from negative to positive yesterday show that DLT token is strongly bullish.

In addition, the sharp rise of the Relative Strength Index (RSI) towards the overbought zone shows that the bears are in control of MIOTA.

Moreover, the position of the Moving Average Convergence Divergence (MACD) indicator above the zero line in the positive region adds credence to this bullish bias. Also note that the MACD sent a call to buy on the 12-hour timeframe yesterday. This occurred when the MACD line (blue) crossed above the signal line (orange) triggering buy orders that resulted in the rally experienced over the last 24 hours.

How To Buy MIOTA

If you want to buy IOTA, you can register and start trading on top exchanges such as: eToro, FTX, Binance and Coinbase. You can find others listed in our crypto trading platforms guide.

Looking to buy or trade MIOTA now? Invest at eToro! 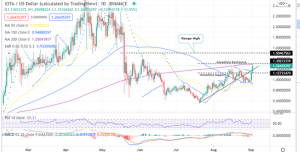 Ethereum all Set for 38.2% Correction – Where to Buy ETH?

IOTA price, Market Capitalisation and Daily Volume increase tremendously in the last 24 hours. Strong fundamentals characterised by great developments on platforms and partnering with the Gaia-X community bolster the MIOTA price. IOTA price prediction is bullish as buyers target the June 03 range high around $1.30. MIOTA price has been uneventful over the past three weeks after rallying 116% between July 20 and August 16. This rally saw IOTA flip the 50- and 100-day Simple Moving Average (SMA) from resistance to support. Yesterday, IOTA price bounced off the 100 SMA at $0.9468 to a high of $1.30 recorded earlier…