The Jackson Hole Symposium is going virtual this week, which underlines how the best laid plans can go awry, but it is the US Federal Reserve’s asset purchase and interest rate policy uncertainty that is making markets nervous.

Having to slum it on Zoom is the least of the problems for the US Fed and its central bank peers, as we suggested in our FOMC minutes and Jackson Hole outlook last week in which we looked at what it means for the Dollar Index (DXY – the dollar rally is set to continue). DXY is trading lower in the European session, off 0.26% at 93.257, but is trading near its nine-month high going into the Jackson Hole meeting (see chart below).

Fed chair Jerome Powell has the unenviable task of steering the Fed away from a refashioned policy framework originally crafted for a world that may now be disappearing from view. That presents a problem of both messaging and substance.

Here is the rub of the issue: bearing down on unemployment while allowing inflation to rise above the target rate of 2% for a short period seemed like a sensible approach to fighting the spectre of deflation, but not anymore.

After all, inflation had been stuck at stubbornly low levels for an unprecedentedly long time, which was the perverse result of the equally unprecedented loose money policy following the 2008-9 financial crisis, with interest rates kept near zero (and in some cases negative) for an inordinate length of time.

Japan had a lost decade precisely because of the build-up of deflationary pressures in its economy and the excessive saving that it encouraged – why spend today if prices will be lower in real terms tomorrow? As you can imagine, there’s a danger that deflation can become an economic growth killer.

Against such a background, inflation became the good guy – the Fed became focused on how to get it to a level where it was not too hot and not too cold.

But today, as we noted, the world looks very different. Far from inflation edging above the target rate of 2%, it is now more than double the rate at 5.4%. And despite the Fed mantra about the general rise in prices being transitory, there are signs that it could be anything but.

So that’s the first problem the Fed and the other bankers will be wrestling with: how to get the message out to the markets that says something like :”our new framework was not wrong but we do think it needs to be adjusted fairly radically”.

By the way, if you want to try your hand at automated forex trading then read our extensive guide. 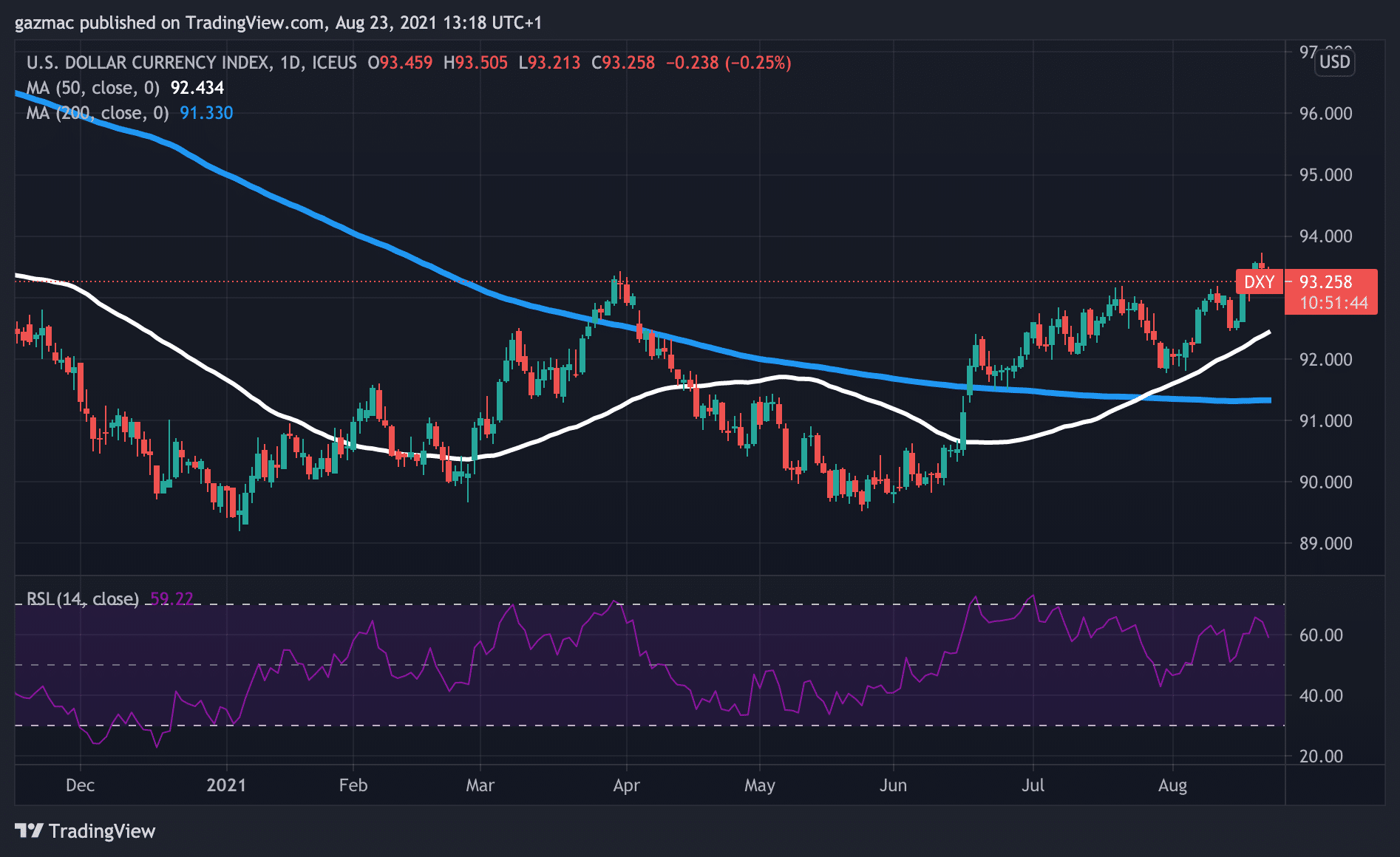 The second part of the Fed’s framework concerns unemployment. We had grown used to central bankers – post financial crisis – obsessing about inflation. Back in the 1970s it was all about using interest rates proactively to prevent an economy overheating and inflation spiking.

Central bankers were scarred by the experience of the 1970s and early 1980s when the danger of getting behind the curve on inflation could force the hand of central bankers in such a way that they had to hike rates dramatically, risking damaging the economy.

Not anymore. The US Fed’s 2020 framework set the goal of achieving sustainable full employment. Clearly the pandemic shock was the sort of Black Swan event that upends policymaker thinking, and the deep losses in the labour market are still being repaired. However, there is no doubt that the economy is firing on all cylinders, even if employment is still 7 million below pre-pandemic levels.

But the response of government to the pandemic – in terms of scope and scale – has probably also taken the Fed by surprise.

The Biden administration has thrown nearly $2 trillion at the economy, assuming the infrastructure bill is voted through. And there’s another $3.5 trillion of fiscal infusion to come if the Democrats have their way – although that’s by no means certain.

So in addition to the continued $120 billion of asset purchases the economy is also contending with gigantic fiscal pump-priming from government spending. The effect of this spending will surely be to accelerate the speed at which the Fed reaches its employment goals for the economy, even if the Delta variant upsets that progress temporarily. Or at least, that’s the hope of the Fed.

Before we move on, you may want to consider forex options trading to leverage your analytical skills, if so read our essential guide before you begin.

But Delta variables aside, supply chain bottlenecks are mounting. The shipping logistics issues are well-known, so too is the chip shortage – both are helping to push prices higher. A newer inflation driver on the scene is the labour shortages in a widening number of sectors, and of both skilled and unskilled labour.

There will be plenty more economic data out this week on the state of the US economy, which should put some more flesh on the nature of those supply restraints.

Today we have PMI from many of the major economies including the US, Tuesday sees US new home sales come into view, Wednesday US durable goods, Thursday US GDP growth plus job claims and on Friday US core PCE price index, and the final reading on the University of Michigan consumer sentiment, with Fed chair Powell delivering a speech to round off the week – and of course the Jackson Hole Symposium on Thursday and Friday.

Forex traders and other market participants should brace for the expectation of hints coming out of Jackson Hole regarding a decoupling of tapering and rate hike timing. Connected to that, we should also be prepared for tapering to begin sooner rather than later and thirdly for interest rates to perhaps start rising by the back end of 2022.

If any of those three elements are seen to be coalescing int eh collective mind of the FOMC, as shown by the Jackson Hole vantage we are afforded this week, then it spells bad news for risk-on sentiment.

Last week we saw how fragile risk sentiment was in the initial response of equity markets to the FOMC minutes that showed a majority in favour of early tapering and the signalling that the inflation goal had been achieved.

On that last point, it was what was missing from the minutes that stands out because of course the inflation goals have been over-achieved to the point of bearing no relation to the goal. In that sense, the inflation goal has not been achieved because the Fed has failed to keep inflation at just above 2%.

Traders will also need to keep an eye on the divergence between European Central Bank and US Fed policy, with little talk of slowing the rate asset purchases coming from the ECB and inflation at 2.2% in July – nowhere near the US rate but headed north (up from 1.9% in June).

If you want to get more involved with forex trading check out our guide to the best forex brokers apps.

Lastly, and in many ways most importantly as Jackson Hole looms, the US Treasuries market is seeing spreads widen in a sign of poor liquidity. Admittedly this is partly due to traders being on the beach but there are worries that it also reflects a rise in risk aversion, with the bond market acting in ways that have unnerved traders.

On the reasons for this, Guneet Dhingra, the head of US interest rate strategy at Morgan Stanley, told the Financial Times: “The first is that this is the month of August and volumes are typically lower in August?… and also I think rates markets have become somewhat perplexing to investors and people have a higher degree of risk aversion.”

Although inflation expectations are elevated, yields on US Treasuries have been falling when they would normally have been expected to rise. However, the bond buying (yields fall when bond prices rise) reflects uncertainty among investors as they seek out safe havens, even as equity markets trade at record highs.

With the likes of Mike Burry of TheBig Short fame betting that long-dated US Treasuries prices are set to fall, the nervousness about the future direction of policy reflects the concerns highlighted in this article.

ING analysts Antoine Bouvet, Benjamin Schroeder and Padhraic Garvey, focusing on the yield curve and the possible danger of inversion (where longer-dated yields are lower than short-dated yields – a highly reliable predictor of recessions), argue that the Fed needs to move more aggressively on tapering.

“If the Fed ever wants to be in a position again to raise its key policy rates without prematurely risking inverting the yield curve, it might be advised to lay the groundwork for a steeper curve ahead of time. The taper could be such an opportunity, especially if the Fed more clearly emphasises de-linking the timing of the taper from the timing of the first rate hikes.”

They could be right, but laying that groundwork in a way that doesn’t crash the equity markets could be very tricky. Although equities do not feature in the Fed’s main framework goals, they would fit under the heading of maintaining “orderly markets”.

The Jackson Hole Symposium is going virtual this week, which underlines how the best laid plans can go awry, but it is the US Federal Reserve's asset purchase and interest rate policy uncertainty that is making markets nervous. Having to slum it on Zoom is the least of the problems for the US Fed and its central bank peers, as we suggested in our FOMC minutes and Jackson Hole outlook last week in which we looked at what it means for the Dollar Index (DXY – the dollar rally is set to continue). DXY is trading lower in the European…