Even though the results of the two-day Bank of Japan meeting will not be seen until tomorrow, the yen has been weakening ahead of the event, down early a further 1% vs. the USD overnight.

Now above the 85.00, the yen is the weakest vs. the dollar for over six months now.   There’s speculation that the Bank may offer further support to the banking industry to encourage lending in the wake of last month’s events, in part to avoid companies with cash-flow issues going under.

As other central banks look poised to tighten policy (such as the ECB), then there are strong headwinds for the yen at present.

US Fed to continue QE2, even if government stops. The minutes of last month’s FOMC meeting show the board fairly split on the outlook for policy.   A few were “uncertain” about the benefits QE, but acknowledged that making changes to the program “were not appropriate at this time”. The recent statements from committee members have reflected the difference of opinions that are currently prevailing, so the minutes were not that much of a surprise to markets.   Meanwhile, whilst QE2 may continue, the US government may not, with the threat of a shut-down owing to the inability to get agreement on the current budget remaining a real possibility.   This could happen as early as Friday if no agreement is reached, but there were some more positive signs late yesterday that the deadlock may be broken.
Too early to get the party balloons out for UK recovery. Sterling pulled away yesterday on the back of the much stronger than expected services PMI data for March, the headline jumping from 52.6 to 57.1. Still, some caution is warranted, given that an element of this 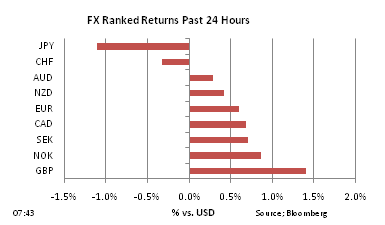 increase was owing to companies benefitting from higher than normal public spending ahead of the fiscal year ending today and the further impending budget cuts in the new fiscal year.   Nevertheless, the stronger activity makes it more likely that the bounce-back in GDP in Q1 will surpass the Q4 decline, but only modestly so in our view. More concerning right now are the indications from the high street, where surveys and company results suggest that activity is very subdued right now.   Today’s results of retailer Marks and Spencer showed Q4 like for like sales (stripping out changes in floor space) down 3.9% vs. the same period last year.

More tightening from China. The move higher in the 1Y lending rate in China, enacted at the end of Tuesday’s public holiday, came as a modest surprise to markets.   This takes the rate to 6.31%, from 6.06% previously.   The move has also come ahead of the inflation data for March, due later this month.   It’s the sharp rise in headline inflation (currently at 5.2%) which has been of most concern to the authorities, with wages also moving higher and threatening to undermine China’s export competitiveness.   Risk appetite was initially dented on the move, the AUD falling nearly half a cent, but the move proved to be transitory, underlining the general resilience that we are seeing, at least in the Aussie.
More funding hurdles in Portugal. Never far from the headlines these days, Portugal today has the task of selling up to EUR 2bn of short-term Treasury bills. These are normally taken up by domestic banks although the brave may be jumping in to take advantage of the yields on offer. The government is aiming to auction 6 and 12-mth bills, looking to raise up to EUR 2bn in total so, whilst the auction will be taken by the market, it’s just a question at what price.
Yen intervention amounts seeping through. We’re getting a clearer picture of how much the G7 nations threw into the ring to support weakening of the yen during last month’s coordinated intervention and not surprisingly, the answer is not a lot.   Canada sold USD 124m according to the Bank of Canada, whilst the Bank of England revealed USD 150m was spent.   This compares to the USD 8.4bn spent by Japan. Of course, it’s no surprise to see such a contrast. The home nation will always have far more currency to sell than is available to overseas central banks, which hold a variety of reserves assets, the majority of which will be dollars. So, whilst some may see it as a sign of a lack of intent on the part of other central banks, that’s not the full story.

Even though the results of the two-day Bank of Japan meeting will not be seen until tomorrow, the yen has been weakening ahead of the event, down early a further 1% vs. the USD overnight. Now above the 85.00, the yen is the weakest vs. the dollar for over six months now.   There's speculation that the Bank may offer further support to the banking industry to encourage lending in the wake of last month's events, in part to avoid companies with cash-flow issues going under. As other central banks look poised to tighten policy (such as the ECB), then…