Sun called it “baseless claims… by third-parties” and that investors have nothing to worry about. In the tweet, he stated that neither Tron nor its subsidiaries, including BitTorrent, have not received any “regulatory proceeding,” be it China or the U.S.

A jolt from the past

2019 was a weird year for crypto with a promising bull run that ran away to a $4.56 million charity lunch with Buffett. While the former part is unrelated to Justin Sun, the latter isn’t. Sun isn’t the one to shy away from a marketing stunt. In 2019, his charity donation of $4.56 million gave him an opportunity for lunch with the Oracle of Omaha – Warren Buffett.

While Sun envisioned changing Buffet’s mind about crypto, his words didn’t seem to do so, at least for the Chinese government, as claims of Sun being banned from exiting the country emerged from various Chinese outlets.

As a result of this incident, the Tron price slumped by more than 55%. However, new rumors of regulatory proceedings circulating among investors have already hurt Tron and Bit Torrent.

Due to rumors and panic among investors, the price of TRX dropped a total of 16% in 3 hours starting from January 04, 06:00 UTC. This was followed up by an immediate surge of 16% in the next 14 hours. 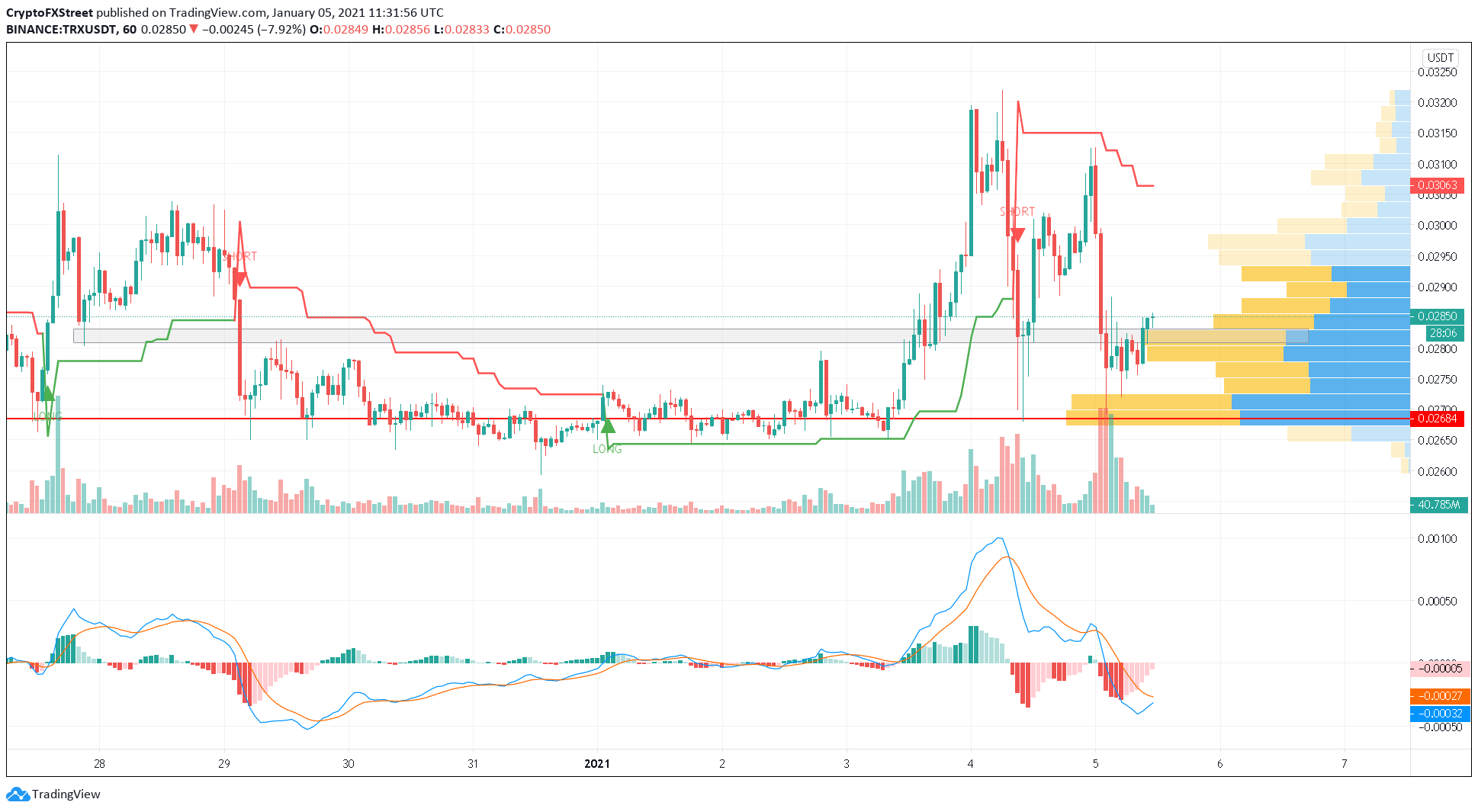 At press time, Tron is trying to find a foothold as it flips crucial support ranging from $0.02808 to $0.0283 into resistance. If the price closes above this level, it is good news for TRX, at least in the short term.

Supporting this bullish scenario is the Moving-Average Convergence Divergence [MACD] Indicator, which shows the 12 and the 26-period moving averages moving closer together, hinting at a potential bullish crossover.

However, if the price fails to successfully flip the $0.028 support, Tron could move sideways or, worse, head lower.

Although Justin Sun has put out a statement to ease investors’ woes, there is a chance for the asset’s price to dip as indicated by the persisting sell-signal by SuperTrend.

In case of a spike in sell-pressure, TRX might head down to the visible range’s Point of Control (PoC), which is also strong support at $0.027.

Following Tron’s footsteps, BitTorrent’s price dropped 13% in 4 hours starting from January 4, 06:00 UTC. However, unlike TRX, BTT seems to have hit the POC at $0.00029 for the visible range and is already bouncing higher. 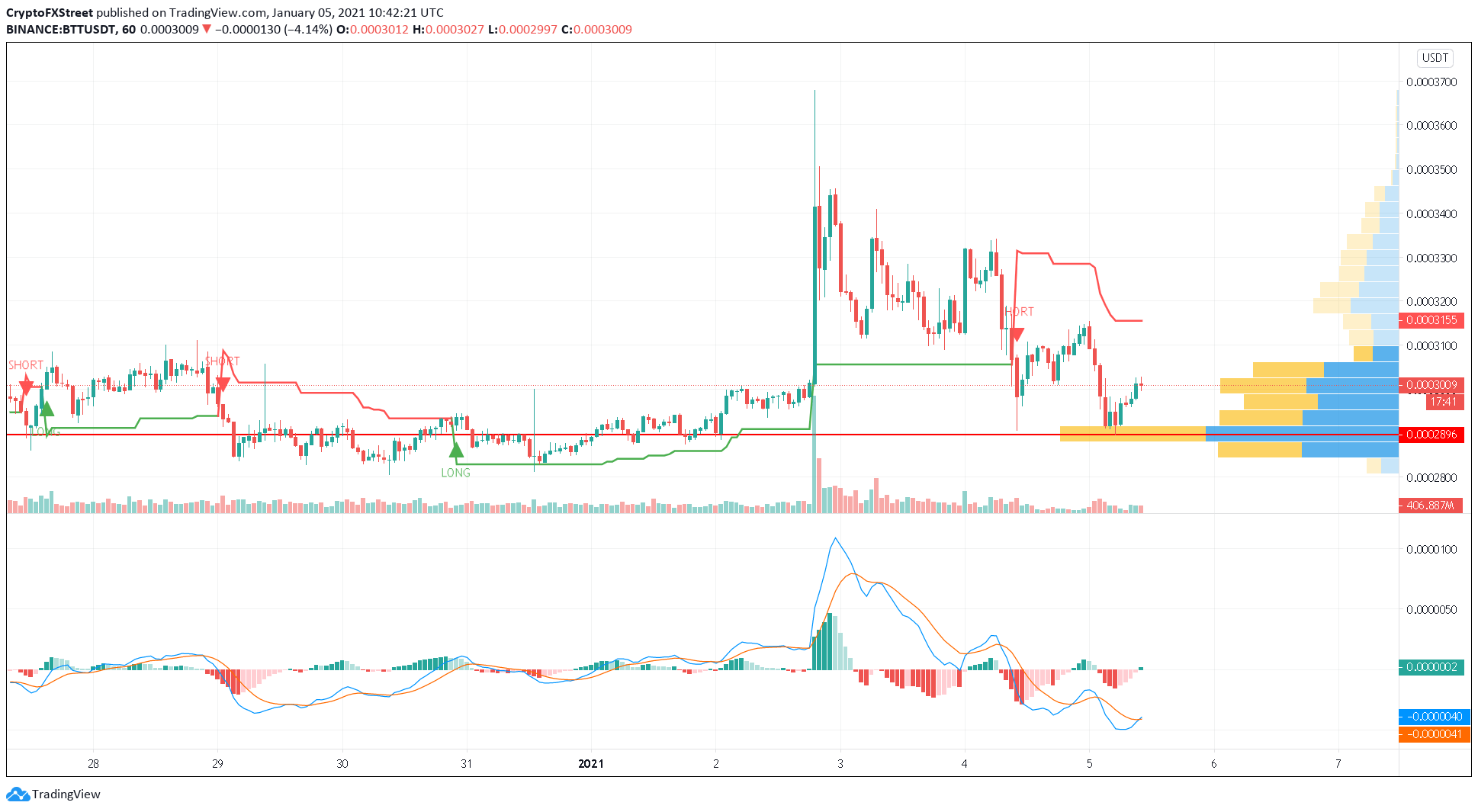 Supporting this bounce and adding more credibility to it is the converging MACD’s 12 and 26-period moving averages, hinting at a potential bullish crossover soon.

While it does seem bullish on the surface, it isn’t quite the right time yet to go long on BTT, especially considering the SuperTrend, which does show a continuation of the sell-signal. Moreover, the price hasn’t formed a higher high or a lower high yet.

Until any of these factors take place, the overall trend will remain bearish.

Tron and BitTorrent drop by approximately 10% as Justin Sun, the Tron crypto-founder, addresses rumors about regulatory proceedings from China and the USA. Due to this drop, both TRX and BTT now sit at crucial support levels pondering the direction they could head. With panic gripping investors, Tron and BitTorrent prices are dropping fast. Alleviating this pain, Justin Sun, a Chinese entrepreneur and Tron founder, tweeted earlier today addressing investors’ panic. Sun called it “baseless claims... by third-parties” and that investors have nothing to worry about. In the tweet, he stated that neither Tron nor its subsidiaries, including BitTorrent, have not received…