“I’m neither a dove nor a hawk, and my ambition is to be this owl”  – Christine Lagarde, President of the  European Central Bank, in her first press conference at the job in December 2019. An owl is associated with wisdom, she added quickly, but what clever policies will Lagarde pull off in 2020? That is an open question for many investors.

She may be all three, at different parts of the year.

Act One – The wise owl

Lagarde was trained as a lawyer and despite vast experience at the helm of the International Monetary Fund and the French finance ministry, she is an outsider in the Frankfurt-based institution. After assuming office in early November 2019,  she pledged to learn, and this period may extend into the first months of 2020.

Her predecessor Mario  Draghi  did the heavy lifting – both by  saving the euro in its darkest hour  and by  injecting more stimulus back in September. After cutting the deposit rate to -0.50% and restarting the bond-buying scheme – at a pace of â‚¬20 billion per month – he left his successor  time to see these policies sift through the system  before making her own mark.

Moreover, not rocking the boat would also be  politically wise  – Draghi’s action caused controversy, and by refraining from changing the ECB’s policies, Lagarde the owl may succeed in  healing the wounds  between the northern hawks and the southern doves.

To top it off, by refraining from adding more stimulus, the new president will be able to  keep the threat of new measures on the table. The tools that are available are limited. Apart from the negative rate, the bank is nearing its self-imposed capital caps and reaching their limits would show that the ECB has no tools. Removing the caps and freely buying bonds of indebted countries would also be controversial.

Overall, it would be wiser and  more “owlish” to keep the threat in the air rather than realize it.

The  menace of more stimulus  could be more powerful in keeping the pressure on the euro and helping lift inflation. EUR/USD may fail to rise during this phase.

Act Two – Hawking up with Germany

Euro-zone growth was sluggish in 2019 and is  expected to remains comatose in 2020. A pick up in economic activity may push the euro higher and trigger upbeat comments from Lagarde.

What could boost the old continent’s economies?  External factors such as the global slowdown and Brexit have been weighing on it, and lower tensions may help it pick up again.

However, the most significant shot in the arm may only come if  Germany picks up the lead and introduces fiscal stimulus. So far, Chancellor Angela Merkel has stuck to its rigid surplus policy despite a material slowdown. That may change as  demand for the end of austerity is rising  – not only from the ECB – but also from the SPD. The junior coalition partner’s new leadership wants more spending. Moreover, both Merkel’s CDU and the SPD fear the rise of the Green Party.

The government may, therefore, go for a version of a  “Green New Deal”  to help the environment, stave off political criticism  and boost the economy. And  that would already push the euro higher on its own.

In Frankfurt, Lagarde may sound a sigh of relief as Berlin makes its move. The monetary stimulus measures may be pushed further down the shed, while governments take the reins.

Faster economic growth  would allow the ECB to flirt with raising interest  rates,  further nudging the common currency higher. Lagarde could comfortably be a hawk – but that depends on Merkel.

Lagarde’s sole announcement – albeit not a market-moving one – was to kick off a  strategic review  of the bank’s policies. The work is set to begin in January and conclude before the year ends. It may result in changing the bank’s target “inflation rates of below but close to 2%.” While 2% is the “holy grail” of central banks,  the ECB ‘s objective of “below” 2%  is somewhat more  hawkish.

The review may yield a new vision. One option is that the Frankfurt-based institution settles for a target of  “around 2%.”  A more flexible aim would allow prices to move above 2% without triggering tighter policy. The implication is a lower value of  the euro  already at the time of the announcement – as it means a  higher bar for raising rates  – or a more dovish stance.

Will Lagarde’s review make her an even bigger dove?

A bolder measure would be to allow  average inflation of 2% over a period of several years. The difference is that the bank  would allow higher inflation for some time  – to compensate for previous low inflation. German and other northern members will likely vehemently criticize such a move, but it cannot be ruled out.  Such a dovish shift could send EUR/USD plunging.

Lagarde may kick off the year by being a  wise owl, sitting on her hands, and keeping EUR/USD depressed. She may then become  more hawkish  and suggest tighter policy – but that depends on Germany’s stimulus. Finally, the central banker may  send the common currency down  by committing to a looser target. 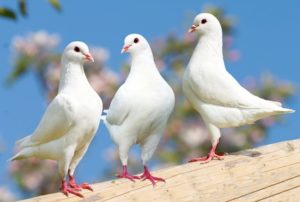 ECB President Lagarde may kick off the year with smart caution. German stimulus may allow her to present a more hawkish stance. The strategic review may end in a dovish twist late in the year. "I'm neither a dove nor a hawk, and my ambition is to be this owl"  - Christine Lagarde, President of the  European Central Bank, in her first press conference at the job in December 2019. An owl is associated with wisdom, she added quickly, but what clever policies will Lagarde pull off in 2020? That is an open question for many investors. She may be…