With the FOMC interest rate announcement on the horizon, risk appetite is modestly stronger heading into the North American open, as the “melt-up” in equities looks likely to continue.   Softer than expected overnight economic data has done little to dampen investor optimism, with the Nikkei gaining 1.23% even after Industrial Production in September came in lower than forecast at a growth rate of 1.5%.   The Shanghai Comp also finished its session in the green, increasing by 1.48% despite soaring SHIBOR rates as yesterday’s reverse repo from the PBoC at higher than normal rates did little to alleviate market participants concerns that the liquidity spigot was closing.

The major bourses in Europe are reverberating the positive price action seen in Asia, with the FTSE, Dax and Stoxx adding 0.46%, 0.36%, and 0.47% respectively to their valuations.   German unemployment numbers came in a little worse than expected, with the amount of people out of work climbing by 2k over the month of September when an unchanged print had been expected from analysts.   This is the third month in a row that unemployment has increased in the backbone of the Eurozone, and signals GDP growth in Q3 for Germany could be a little softer than originally expected.   Elsewhere in the zone, the Italian treasury held a bond auction where they managed to move â‚¬6bn of 5 and 10 year paper, generating greater demand than at the previous auction, with yields also falling when compared to the last offering.   The EUR is slightly stronger against the buck heading into the North American cross, but fairly stagnant in the mid-1.37s as participants await the FOMC statement later today.

Turning our attention to North America, the first read on private payrolls in the US for the month of October was released this morning, and missed expectations to the downside.   Analysts had forecast the number from ADP would show private employers hired 150k new workers in October, however the official reading showed that only 130k new jobs had been created.   This is the first look at the employment situation before the delayed overall jobs report from the BLS that will be releasednext Friday, and telegraphs it might not be a very optimistic report.   The plunge in private payrolls was the 4th  consecutive monthly decline, and the 7th  miss of expectations in the last 8 months.   The softer than forecast print doesn’t take into account any government   workers, but does illustrate the apprehension of private companies to hire given the uncertain economic climate created by the government shut-down.   Since Moody’s took over compiling the ADP survey, the discrepancy between the ADP and BLS reports have narrowed, highlighting today’s soft private payroll number could dovetail into a very weak BLS NFP report  next Friday.

On the consumer price side of the spectrum, the inflation numbers for September out of the US were essentially a non-event.   Headline CPI on a y/o/y basis came in bang on expectations with a print of 1.2%, dropping from the 1.5% registered in August.   The core reading slipped marginally from the prior month printing at 1.7%, which was also slightly below the forecasts the reading would remain unchanged.   The consumer price numbers don’t give any indication there are underlying pressures beginning to bubble, which will allow the Fed continued breathing room in implementing is accommodative monetary policy stance.

Markets were rather quiet after the economic releases, with S&P futures retaining their modestly positive bias, while the DXY dipped slightly and the Loonie held its earlier morning gains.   The lack of reaction after the ADP payrolls suggests the markets are squarely focused on the Fed, however today’s data suggests the Fed will continue to be in “no-taper” mode, which if the case today, could be reinforced with a weak BLS NFP reading  on Friday.

The Loonie spent the majority of the yesterday’s North American session on the defensive, with traders unwinding exposure to the commodity-linked currency as Bank of Canada Governor Poloz testified before the House of Commons finance committee and reiterated the bank’s neutral stance towards monetary policy.   The BoC chief echoed the central bank no longer holds an explicit bias towards higher interest rates, and commented that the economy would have its “hands full” working off the excess capacity seen in the output space, and getting inflation back up to target.   Although Poloz did say the change in tone from the bank didn’t signify a “very significant change” this did little to stem the tide of pressure on the Loonie, with the path of least resistance pushing USDCAD higher.   The Loonie has managed to claw back yesterday’s losses with USDCAD pivoting in the mid-1.04s, but price action has been fairly muted with the Fed on tap later today.   Spot and implied volatility for USDCAD has once again diverged, making us favour a compression of the spread over the coming weeks, with the potential for spot to catch-down to implied vol should the Fed continue to depress volatility across all asset classes.

With the major economic releases out of the way for the day, focus now turns to the FOMC interest rate statement that is due to be released at  2:00pm EST.   There is no press conference from Bernanke following the announcement, so the only real information traders will have to decipher is the accompanying rate statement, and if there have been any meaningful changes to the Committee’s outlook for the strength of the economic recovery. There is little to suggest that we will see any surprises from the Fed at this meeting, with the members likely holding fire on any major announcements until they have some more time to assess the incoming data.   Short-covering in the DXY had the trade-weighted basket up 0.5% yesterday, so it is likely traders were amending their bearish Fed view, and getting more neutral ahead of the release.   A statement from the Fed that doesn’t veer much from what we’ve seen in the past will likely be a non-event for high-yielding assets, while a slightly more hawkish slant could help the DXY retain its bid tone.

Looking ahead to  tomorrow, Canadian GDP for the month of August is set to hit the wires, and with all the recent commentary from Poloz and the Bank of Canada, this release will hold more prominence than usual.   Expectations are for real GDP growth to expand by 0.2% over the month of August, slowing from the 0.6% rate that was seen in July.   A softer than expected release will add fuel to the Loonie selling fire, with the negative news piling up for the commodity-currency and driving bulls to the exits.   A better than expected reading may call into question the sour forecasts for Q3 GDP forecasts, and give the Loonie some reprieve after the bashing it’s taken over the last week.   We continue to hold the view that corporates short USD would do well to buy on dips in USDCAD, as there is likely limited room for the Loonie to make any meaningful headway against the big dollar with the BoC transitioning to a more neutral view on interest rates. 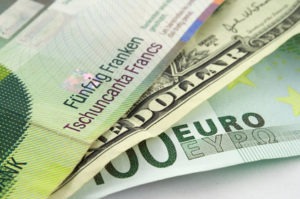 With the FOMC interest rate announcement on the horizon, risk appetite is modestly stronger heading into the North American open, as the "melt-up" in equities looks likely to continue.   Softer than expected overnight economic data has done little to dampen investor optimism, with the Nikkei gaining 1.23% even after Industrial Production in September came in lower than forecast at a growth rate of 1.5%.   The Shanghai Comp also finished its session in the green, increasing by 1.48% despite soaring SHIBOR rates as yesterday's reverse repo from the PBoC at higher than normal rates did little to alleviate market…