NEM group developers have been working around the clock to ensure that the cryptocurrency migration process to Symbol, a next-generation enterprise-grade blockchain protocol, is smooth. It is essential to note that XEM users, the official token for NEM, will have to get ready for a snapshot that will convert their coins to the new XYM token on a ratio of 1:1.

The Opt-in process takes off

According to an announcement made by NEM Group on September 15, the Opt-in process has commenced. The process started eight days late to allow “testing and improvement of the UI/UX. The network also assured the community that “testing is ongoing, but we do not foresee any challenges at this point.”

Users must also know that Opt-in is the only process that will support the conversion of XEM to XYM “at the point of Snapshot, before the new chain launch of Symbol scheduled for December.” The process, as well as the instructions, has been detailed on the website. Similarly, the Opt-in web pages and the terms of conditions went live on September 15.

Please note that it is your XEM balance at the point of Snapshot (and not when you Opt-in) that will be allocated an equivalent amount of XYM into your wallet.

You will be able to Opt-in to claim your XYM tokens for up to 6 years after the launch date, and further details on how to do this will be shared in the near future.

Users can carry out the Opt-in process from their desktop wallet and NEM mobile wallet, but this applies to Android users only as the iOS wallet is still under approval. There is no foreseeable threat to the process; however, it is essential to note that testing is still underway. The CEO of NEM Group, David Shaw, says Symbol has been developed, taking into account “advancements in the industry.” The new protocol, which has been built from the ground up, ensures that key features like scalability, decentralization, and enterprise application are prioritized.

At the time of writing, NEM (XEM) is trading at $0.1118. The token is still trading a lower high pattern. However, a higher low pattern formed from the beginning of September has formed a symmetrical triangle pattern.

The Relative Strength Index shines a light on the gradual uptrend above the trendline support. Movement of the indicator above 40 and 50 key levels would most-likely signal an increase in buying positions, which may eventually propel XEM above the triangle resistance. If a swell in the volume supports the breakout, NEM could easily climb above $0.14 and $0.17 critical hurdles. In July NEM rallied over 50% and chances are that it can repeat the same spike as long as fundamtal levels continues to improve. 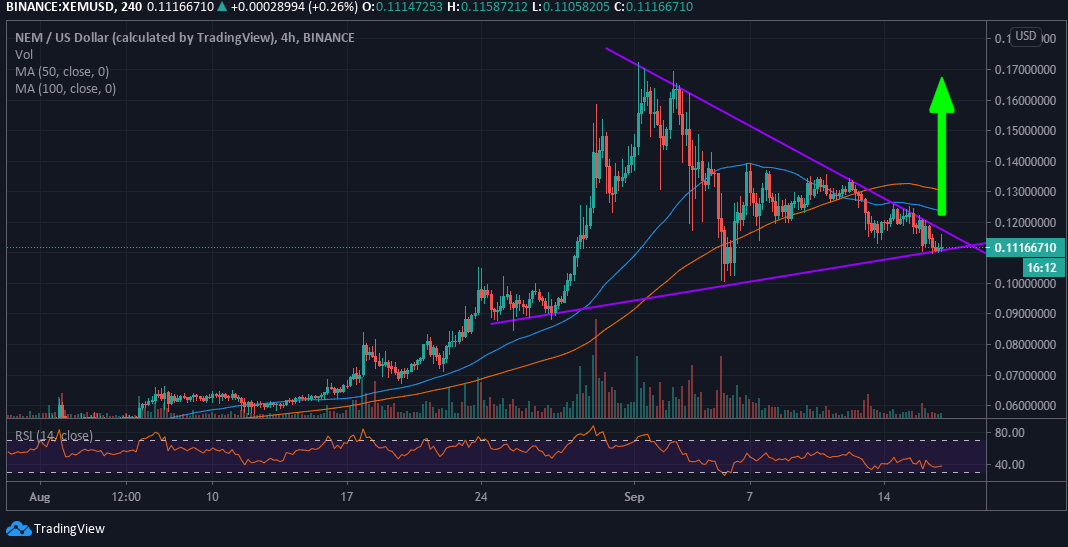 According to Santiment, there has been a spike in development activity within the NEM network. The surge is obviously attributed to the network upgrade and the ongoing testing to ensure that migration to the new Symbol blockchain runs smoothly. Simultaneously, social activity dropped significantly as the price slumped in the last week of August and the first week of September, the volume appears to be picking up the pace, perhaps due to the impending migration.

Although NEM is poised to commence a rally, short term analysis shows that declines would take precedence before any significant recovery comes into play. The price is trading under the 50 Moving Average and the 100 MA. Moreover, the RSI in the hourly range highlights that the bearish grip is getting stronger.

Note that NEM has slipped under the Bollinger Band middle curve, which means the pressure on the prevailing price level is immense. Support must be sort for, preferably above $0.11 to allow gains to be staged towards crucial levels at $0.14 and $0.17, respectively.

NEM begins the Opt-in process in preparation for a Snapshot to convert XEM tokens to XYM in December. The upcoming upgrade symbol is designed to prioritize decentralization, scalability, and enterprise application. NEM short term analysis suggests that price will retest $0.11 before a significant recovery can resume. NEM group developers have been working around the clock to ensure that the cryptocurrency migration process to Symbol, a next-generation enterprise-grade blockchain protocol, is smooth. It is essential to note that XEM users, the official token for NEM, will have to get ready for a snapshot that will convert their coins to the…