Home » No One Wants To Play in The Gold Sandbox – Analysts

No One Wants To Play in The Gold Sandbox – Analysts

The price of gold has fallen quite sharply, below the “taper tantrum” lows of 2013 and back to levels seen early in the financial crisis.

It seems that markets fell out of love with the precious metals. Here are some thoughts:

It has become abundantly clear recently that global investors have no desire to play in the gold sandbox.

As proof, last Friday the precious metal broke multi-year triple bottom support in the $1180-$1185 area and yet there was no sign of larger stop-loss or stop-entry selling as would normally be the case.

Instead, gold edged modestly lower and then stalled, until today, when the precious metal finally saw mildly stepped-up selling.

After closing below the key triple bottom support in the $1180-85 zone for three days, the precious metal has slipped lower, as had been expected.

As a larger downside target, the market eyed an eventual move to $1044.73, the Feb 2, 2010 low and potentially also a test of the psychological $1000 mark, if U.S. dollar strength continues, as is deemed likely.

With oil prices on the decline and the dollar rising, global investors felt no compelling reason to buy gold and those with physical gold needs were content to wait for even lower levels.

For now, there seems to be a “buyers strike,” with regard to gold, he said.

That said, the $1000 to $1100 zone should act as “pretty good support” for the precious metal in the near-term, Azzouz said.

After bottoming around $682.57 in October 2008, just after the Lehman Brothers Bankruptcy in September 2008, gold shot higher as U.S. Treasury yields fell and the dollar came under pressure.

The precious metal topped out at a lifetime high of $1921.17 on September 6, 2011, just before the Federal Reserve introduced “Operation Twist”.

Shortly afterward, eurozone concerns began to weigh and the dollar began to climb again, which weighed on gold.

After peaking at $1796.08 on Oct. 5 2012, gold began to move lower, some times in fits and starts as speculative accounts bailed out of long positions.

While the precious metal has seen occasional rallies, the larger downtrend has been in place since.

“A firming dollar and well performing equities, should help gold and silver drop toward new cyclical lows based on what we see on the global macroeconomic front in the U.S. and the rest of the world into 2015, along with the varied monetary policy across the various major global economies,” said Bart Melek, head of commodity strategy at TD Securities.

He looked for gold to move lower, but stressed “we are unlikely to see an outright rout.”

Gold traders have been keeping a close eye on the U.S. economy for insight into when short-term yields may start moving higher, he said.

They were also “watching for negative knock-on effects from the rest of the world as weaker U.S. growth will postpone any tightening while stronger growth is very likely to bring it forward,” Melek said.

As for supply/demand factors, gold has moved lower “even as the official sector is set to increase its holdings by some 400 tons this year,” the supply from primary and secondary sources has declined and total demand remains respectable,” he said.

Gold’s slippage seems driven more by the investment side, where speculative accounts and ETFs have been active sellers.

“In our view, the heavily-levered speculative funds and physical investors are the primary drivers of the gold market; they better explain what is currently happening and what is likely to occur next year, rather than the physical trade market,” Melek said.

“Gold is likely to face tough competition from other assets, with a strong dollar likely its biggest obstacle,” said UBS strategist Edel Tully and analyst Joni Teves in a research note.

There were downside and upside risks to gold going forward.

Gold could be weighed by the Fed accelerating the normalization process, by weak Chinese growth, and by a “U.S. capex-led boom,” Tully and Teves said.

On the latter, “faster U.S. economic growth would offer considerable headwinds for gold, especially given that part of the drivers would likely be high profitability and faster business investment; In this scenario, gold faces much stiffer competition from equities,” they said.

“Higher levels of confidence” in the U.S. economy “would further erode gold’s appeal as a safe-haven” and “would also be accompanied by a much stronger dollar, which would act as a difficult obstacle for gold,” they said.

Gold could rebound in response to an “adverse global reaction to Fed normalization,” to “shocks in confidence,” and “European deflation,” Tully and Teves said.

“An increase in investor concern over the slowdown in economic growth could revive interest in gold,” UBS said.

A shattering of global investor confidence could come from several areas, from a “1) re-escalating of geopolitical tensions, 2) a more widespread pandemic, 3) financial fragility,” UBS said. 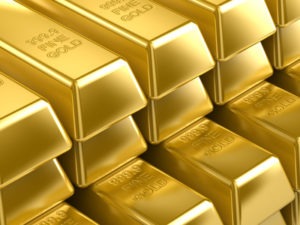 USD/JPY flies through 115 and comes back down. For now.

The price of gold has fallen quite sharply, below the "taper tantrum" lows of 2013 and back to levels seen early in the financial crisis. It seems that markets fell out of love with the precious metals. Here are some thoughts: Here is their view, courtesy of eFXnews: It has become abundantly clear recently that global investors have no desire to play in the gold sandbox. As proof, last Friday the precious metal broke multi-year triple bottom support in the $1180-$1185 area and yet there was no sign of larger stop-loss or stop-entry selling as would normally be the case.…