NZD recovered across the board dispute the Reserve Bank of New Zealand’s dovish rhetoric and jawboning of the currency.

”The near term picture is a conflicted one, with the RBNZ’s reinforcement yesterday of the “least regrets” and “rather do too much too soon than too little too late” approach going head to head with improved optimism over a fiscal deal in the US and the consequent pick-up in risk appetite,” analysts at ANZ bank explained.

”That’s probably not a bad way to think of how the next few weeks will play out, and with global forces typically winning out in the end, the risk is the trend is gradually higher, punctuated by locally inspired pull-backs.”

Fiscal stimulus has been talked about numerous times from various Fed officials which has driven home the conclusion that it is inevitable.

President Donald Trump walked back on his calling for a halt to negotiations, urging Congress to pass money for airlines, small businesses, and relief checks for individuals after abruptly calling off negotiations.

This has fueled hopes that broader pandemic relief could be forthcoming, if only incrementally.

”While the political dance in Washington continues, the response to the deterioration in the virus is intensifying. Sixty-one more schools in NY closed bringing the total to 169. The initial guidance is that they won’t reopen until 21 October, but we are all aware of the risks to that,” analysts at ANZ argued.

Meanwhile, the bird kicks-off the Asian session at familiar levels, having navigated a circa 50bp range over the past 24hrs.

As part of an ongoing longer-term bearish analysis:

(Monthly chart Reverse Head and Shoulders in the making).

(Weekly chart, bearish head and shoulders in the making).

… in yesterday’s analysis, it was explained that a higher risk downside trade setup came into play:

Considering we have already seen a restest of 0.66 the figure and the rejection, there is a 1:3 risk to reward opportunity by taking a short at market, placing a stop loss above the near-term highs (structure).

However, this is a higher-risk trade and would require a reduced percentage at risk.

The price is yet to fully retest the structure and is facing two lots of support at this current phase of its break below 0.6600.

The target can be moved to breakeven to exit or the reduced trade setup can be left in place.

However, a reverse head and shoulder is now in the making which will rhyme nicely with the prospects for the price to indeed headed to the originally presumed 0.6620/30 resistance area. 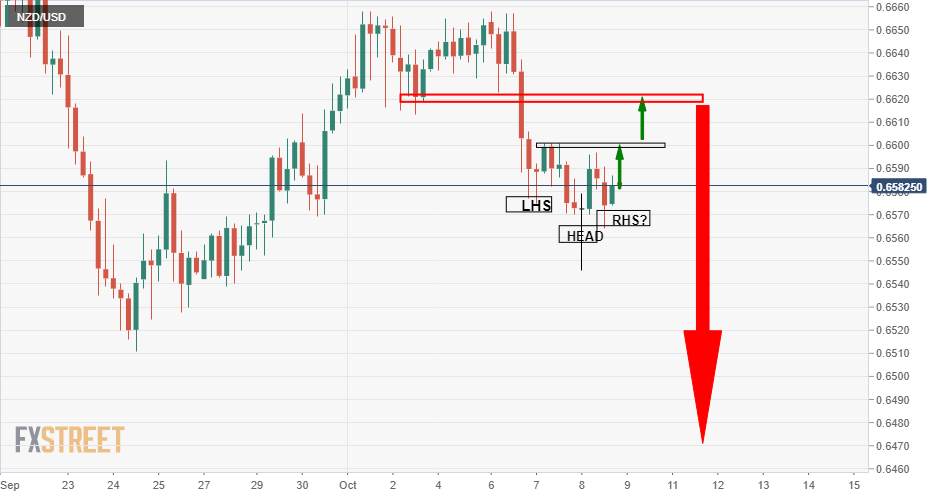 NZD/USD bulls not going down without a fight and eyes are on 0.6630. Bears are looking for a prime entry to take advantage of the longer-term bearish outlook. NZD/USD is currently trading at 0.6582 between a low of 0.6547 and a high of 0.6596 as the bears are denied of an immediate feed on the downside.  NZD recovered across the board dispute the Reserve Bank of New Zealand's dovish rhetoric and jawboning of the currency.  ''The near term picture is a conflicted one, with the RBNZ's reinforcement yesterday of the “least regrets” and “rather do too much too soon than too…