Home » OMG Network price will skyrocket if it breaks the $4.40 resistance level

OMG Network price will skyrocket if it breaks the $4.40 resistance level

OMG Network price shows a considerable increase in volume as the token tests the $4.40 resistance barrier. If breached, OMG has an opportunity for a quick 60% upswing.

Ever since OMG sliced through the 50 and the 100 day SMA, it presented a robust bullish opportunity backed with increasing investors’ activity. Now, a successful breach of the $4.40 resistance will seal OMG Network’s bullish fate.

This price hurdle has managed to reject every bullish impulse OMG has experienced since early September 2020. However, the most recent attempt seems promising as multiple technical and on-chain indicators have turned bullish. 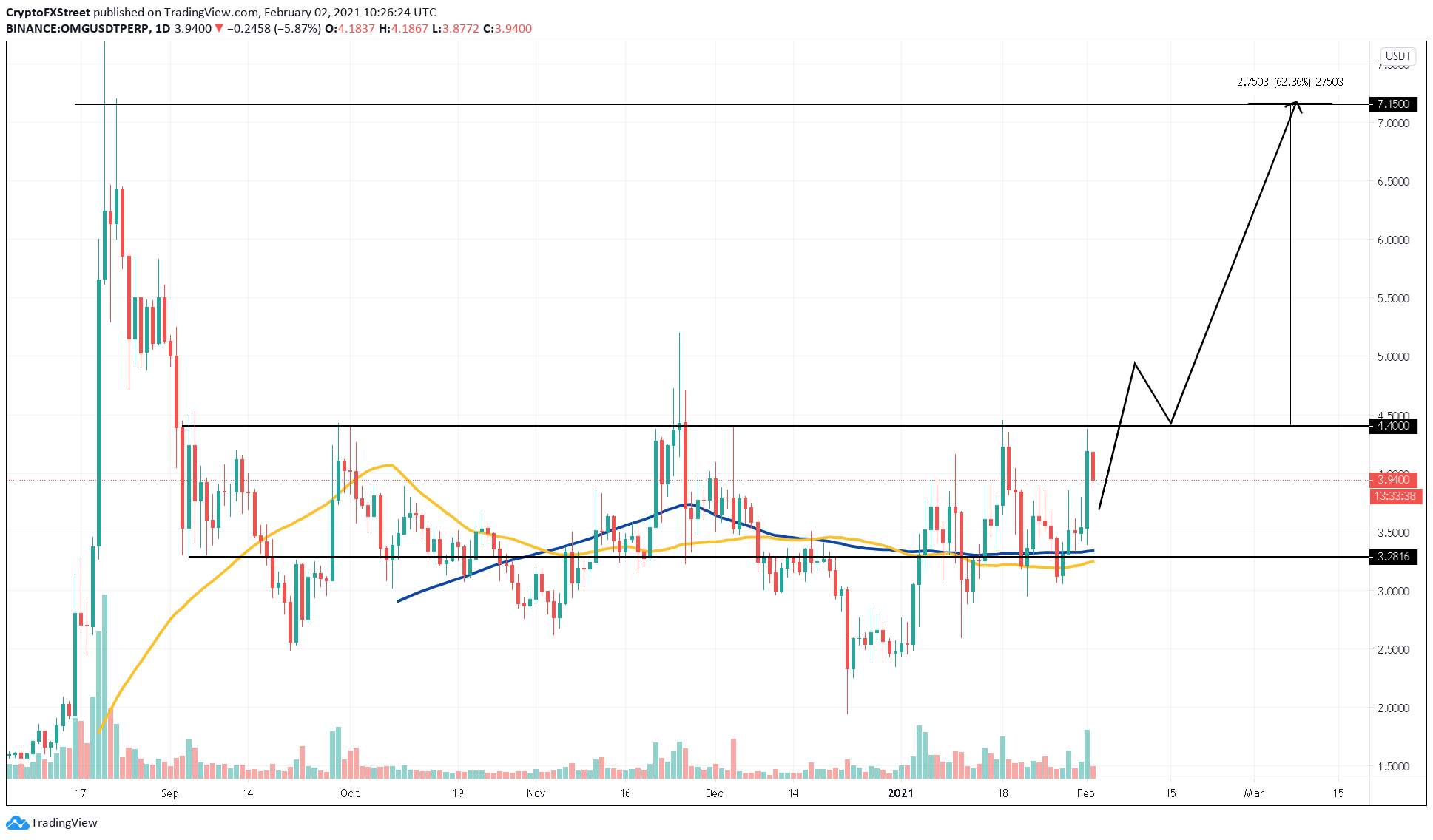 IntoTheBlock’s Global In/Out of the Money model shows that any selling pressure caused by short-term sellers will be absorbed by roughly 78,000 addresses that purchased 45.5 million OMG at $3.70. For this reason, the odds seem to favor the bulls.

As long as OMG Network price can slice through the overhead resistance at $4.40, its market value will be able to rise by 60% towards $7.15. Here, the IOMAP cohorts show that 19,000 addresses are holding 7 million OMG.

Given OMG Network’s potential for further highs, there has been an uptick in interest from market participants. The number of new OMG addresses being created on a daily basis rose to nearly 1,000, representing a 170% increase in the past week.

All of these on-chain metrics point to the inevitable breach of the $4.40 resistance level. Since there isn’t any significant supply barrier after this hurdle, a 60% surge seems very likely for OMG Network price.

Conversely, a correction towards the 50 or 100 day SMA is possible if OMG price fails to slice through the resistance.

OMG Network price needs to breach a critical resistance at $4.40 to seize the opportunity to almost double. This supply barrier has caused four rejections over the past five months. Several on-chain metrics point at a reliable uptick in user adoption and whale activity, suggesting a breakout is possible. OMG Network price shows a considerable increase in volume as the token tests the $4.40 resistance barrier. If breached, OMG has an opportunity for a quick 60% upswing. OMG Network price looks primed to double Ever since OMG sliced through the 50 and the 100 day SMA, it presented a robust bullish opportunity…