Users of Percent Finance, a newly born community-owned fork of Compound Finance protocol, lost access to their over $1 million funds.

According to the Percent Finance team’s official blog post, a technical bug in the programming code of the smart contracts rendered 446,000 USDC, 28 WBTC, and 313 ETH unavailable. It means that users cannot supply, borrow, repay, or withdraw their coins over $1 million at the current market prices. About 50% of that amount belongs to community mod team wallets.

The team of the project contacted Wrapped BTC, Circle Play, and Coinbase, asking for help to release the frozen funds and compensate users. The affected users are invited to contact the community moderator via direct messages of a dedicated Discord channel.

What happened to Percent Finance

Percent Finance is a decentralized protocol that came to life in September 2020 as a fork of a popular DeFi lending protocol, Compound Finance. The project positions itself as a decentralized money market that offers users access to permissionless lending and borrowing and aims to create fair and unmanipulated markets.

On November 5, the project team announced that some of their markets experienced problems after the interest rate model update.

Due to an error in the interest rate model update, which we conducted earlier today, the USDC, WBTC, and ETH markets are frozen. You cannot supply, borrow, repay, or withdraw from them at the moment.

As the team further explained, the frozen markets use an older style of CToken copied from Compound protocol as part of the fork. The error occurred when old-style tokens were updated to use a new style interest rate model, which is not compatible with them. As a result, CToken failed when trying to accrue interest.

The problem is severe because the error cannot be reversed.

While other markets remain operational, the project asks users to repay any outstanding loans, withdraw their money, and refrain from borrowing in any markets. The developers reached out to Circle/Coinbase and BitGo to help release those funds, but frozen ETH may be lost forever.

Unfortunately, it seems the locked ETH may be irretrievable, but we are currently working on potential scenarios to make affected users whole.

PTC, the native token of Percent Finance, shed nearly 90% of its value in a matter of hours after the team confirmed the issue. According to CoinGeko data, PCT started the sell-off on November 4 from $0.14 and hit the low of $0.013. At the time of writing, the token is changing hands at $0.014. 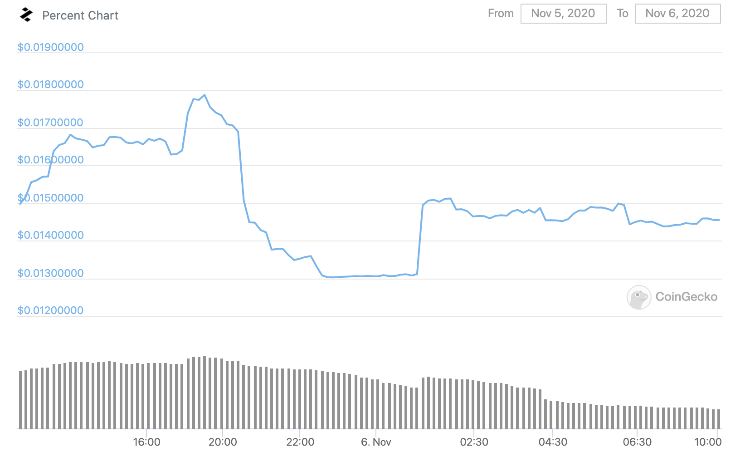 PTC sell-off is exacerbated by the bearish sentiments dominating the DeFi industry. On October 30, the leading DeFi-tokens hit new lows amid the collapsing trading activity.

An update of the DeFi protocol Percent Finance resulted in a severe technical bug. The team seeks assistance from the issuers of the locked coins. The native token of the project drops like a stone.  Users of Percent Finance, a newly born community-owned fork of Compound Finance protocol, lost access to their over $1 million funds.  According to the Percent Finance team's official blog post, a technical bug in the programming code of the smart contracts rendered 446,000 USDC, 28 WBTC, and 313 ETH unavailable. It means that users cannot supply, borrow, repay, or withdraw their coins over $1 million at the…