Latest
You are at:Home»Forex News»Overbought conditions may hold EUR/USD back

EUR/USD is alive and also kicking – long days of low volatility have come to an end with the biggest daily move since September 17. And the world’s most popular currency pair’s direction is to the upside – mostly due to US dollar weakness.

The US ISM Manufacturing Purchasing Managers’ Index (PMI) for November has badly disappointed by falling back to 48.1 – reflecting contraction. The employment component also retreated, falling to 46.6, thus lowering expectations for Friday’s jobs report. The figures have been weighing on the greenback, which has been in retreat across the board.

Markets have also been struggling with President Donald Trump’s fresh appetite for slapping tariffs. Most importantly for EUR/USD, the administration is contemplating hitting France with duties on goods worth $2.4 billion. The planned levies come in response to France’s digital tax, which mostly hurts US tech firms. Bruno Le Maire, Frances’s finance minister, has pledged to retaliate against US tariffs and called them “unacceptable.” Trump will meet French President Emmanuel Macron and other leaders at the NATO Summit in London.

Other European countries are also in America’s crosshairs for similar measures to get Silicon Valley’s firms to pay their share. The news has limited euro/dollar’s advance.

Trump has also been pointing his ire toward Brazil and Argentina as both South American countries have been selling soybeans to China. The Sino-American trade dispute has been the focus of global investors, and here the picture is murkier – with contradicting statements from officials.

White House adviser Kellyanne Conway said that the deal with China “is being written” while Commerce Secretary Wilbur Ross threatened Beijing with new tariffs. Washington is still on course to hit China with new duties on December 15.

While intensifying trade tensions have favored EUR/USD so far, the fresh focus on France and the potential risk-off atmosphere may eventually benefit the dollar.

On Monday, the common currency benefited from comments by Christine Lagarde, the new President of the European Central Bank. In a testimony before the European Parliament refrained from providing clues about the bank’s next moves – and the euro ticked higher. Why? Lagarde had previously expressed dovish remarks, and refraining from repeating them was taken as a hawkish sign.

ECB members Pablo Hernandez de Cos and Benoit Coeure are speaking today alongside Isabel Schnabel and Fabio Panetta, both of whom have been nominated to serve at the Frankfurt-based institution.

Investors seem to be shrugging off uncertainty about German Chancellor Angela Merkel’s political future. The SPD, Merkel’s junior coalition partner, chose a new leadership over the weekend which may break up the government. So far, everything is calm in Berlin, but things may change.

Overall, tariff talk is likely to dominate EUR/USD trading, but there several additional moving parts that may impact price action. 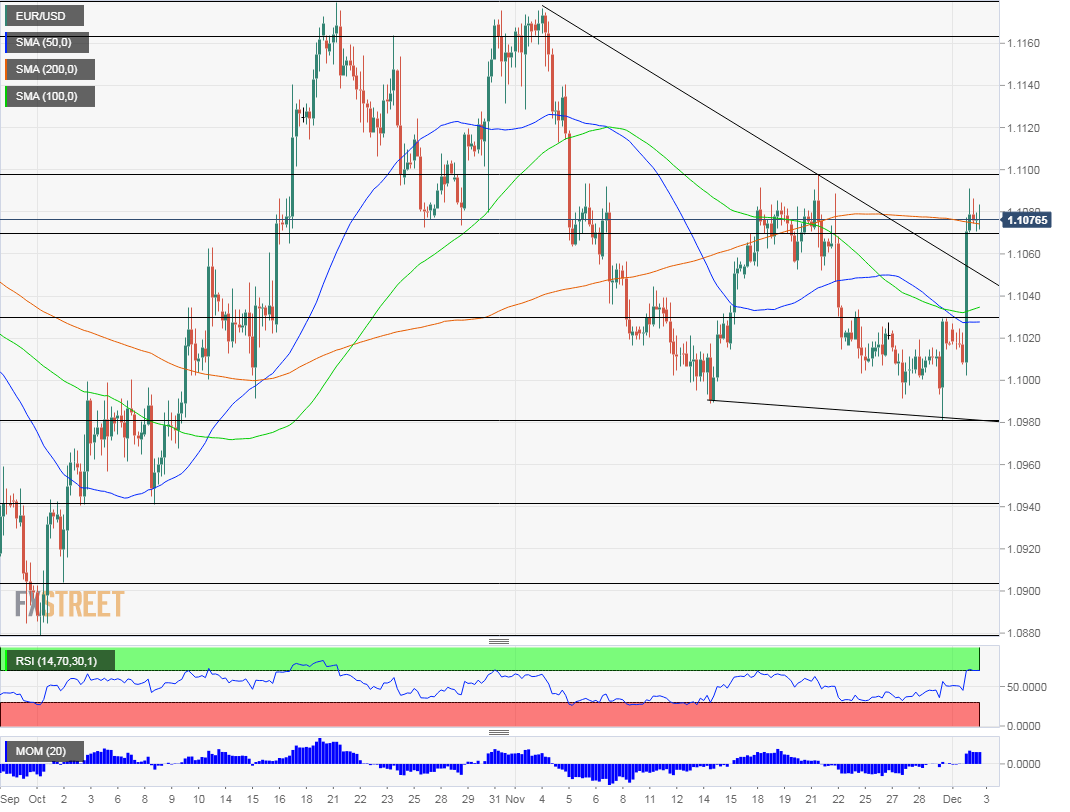 The Relative Strength Index on the four-hour chart is just above 70 – indicating overbought conditions – and potentially signaling a downward correction. Other indicators are upbeat. Euro/dollar is trading above the 50, 100, and 200 Simple Moving Averages and is enjoying upside momentum. However, it has failed to break above last week’s high at 1.11, and setting a lower high may warrant some caution.

Get the 5 most predictable currency pairs
Previous ArticleChina: Production and exports likely rose in November – Standard Chartered
Next Article EUR/USD could now test 1.1096 and above – UOB