Polkadot price outlook has notably improved today as it is showing a high-volume breakout with strong fundamentals behind it.

Bullish news came out today informing  Polkadot  followers that Parity Technologies has plans to develop a parachain called Statemint. The idea behind it is to provide robust functionality for deploying assets in the Polkadot and Kusama networks, thereby improving the user experience and offering lower fees than current digital solutions.

This parachain would not provide the verification tools, as they are unique to each asset deployed on-chain, but it would provide the core functionality to issue such assets where each issuer would defend the authenticity of their promises.

Each issuer will need its own methods to defend the authenticity of its asset. An example would be a silver issuer providing certificates and its vault records. Owners of the assets need to evaluate the credibility of the authentication process carefully.

Once the asset is issued, a maintenance team is established, consisting of the issuer, the administrator who can freeze or burn tokens on any account, and a freezer who can freeze any or all tokens.

Statemint will stay fully aligned with Relay Chain’s token holders. As a result, governance bodies will dictate the direction of the chain and decide whether to allow an asset to register without a deposit.

Since February 20, Polkadot price has shaped a symmetrical triangle, and it is breaking out today. The volume profile during the pattern formation was very constructive as it trended downwards, which tends to occur 86% of the time. Additionally, the breakout occurs at about 85% of the triangle’s length from base to cradle, which is consistent with the average for successful breakouts.

A daily close above $38.70 would confirm the breakout from the triangle and raise the odds that Polkadot’s price will test the all-time high at $42.20 in the coming weeks.

If DOT rallies above the all-time high, the next major resistance levels are shaped by the measured move target of $50.50 and the 1.618 Fibonacci extension at  $52. Such price movement would represent a 40% advance from the symmetrical triangle breakout. 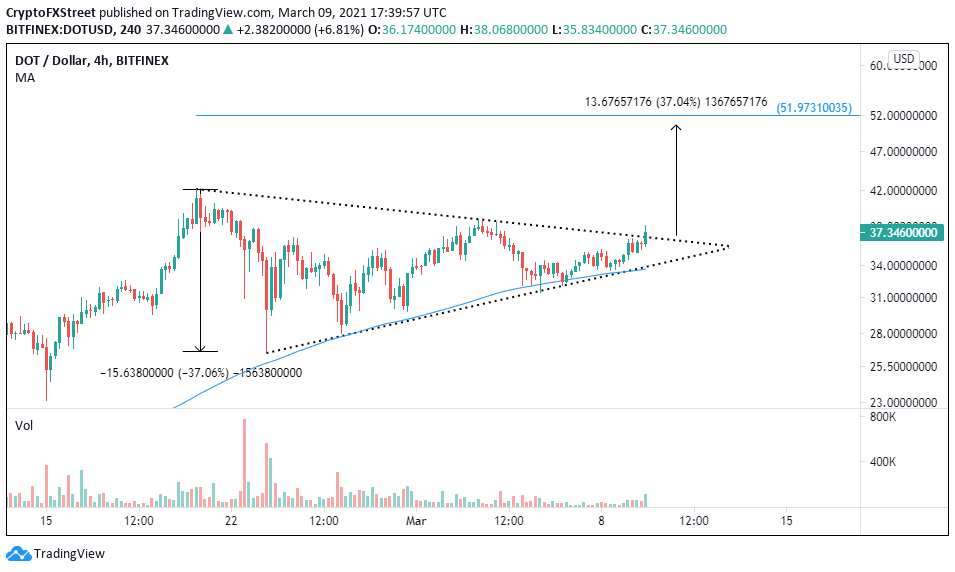 The most significant support levels to evaluate  pattern failure  are the 144 four-hour moving average, which has been solid support for Polkadot price since early March, and more importantly, the March 5 low at $31.50.

In closing, market operators need to consider that throwbacks occur 37% of the time in symmetrical triangle patterns as the one Polkadot price developed. It does detract from overall performance, but it doesn’t mean the breakout has failed.

Polkadot price is emerging from a picture-perfect symmetrical triangle pattern with the trigger at $36.80. Statemint will allow entities such as artists and central banks to issue tokens for their work on Polkadot. Users of the blockchain will benefit as the new parachain will lower fees. Polkadot price outlook has notably improved today as it is showing a high-volume breakout with strong fundamentals behind it.   The first common-good parachain Bullish news came out today informing  Polkadot  followers that Parity Technologies has plans to develop a parachain called Statemint. The idea behind it is to provide robust functionality for deploying…