Latest
You are at:Home»Forex News»Pound downed by Brexit, and nothing else matters

Brexit never really went away, and when things do not move forward, they move backward. The cross-party Brexit talks seem closer to collapse as pressures on both sides of parliament mount. UK PM Theresa May is under immense pressure not only to quit but also to ditch the talks with Labour. Senior members of her party called her to do so, and she is not warming up to accepting a customs union, a crucial demand from Labour.

The opposition party is hardening as well, with an increasing demand to hold a second referendum for any Brexit accord. Both main parties suffered in the local elections in early May and are set for humiliating results in the European Parliament polls on May 26th. They may get closer to their core voters than to each other.

Without an accord, the UK is inching closer to a no-deal Brexit, especially as May’s position seems untenable. Her successor may be a hardline Brexiteer such as Boris Johnson or Dominic Raab. Labour is reluctant to negotiate with a government that is on the brink of collapse.

In the meantime, the UK seems to be doing quite well. The unemployment rate surprised with a drop to 3.8% in March, better than expected. However, wage growth slowed down to 3.2%, worse than projected. Sterling ignored the figures.

GBP/USD does not only ignore top-tier figures at home but the global issues abroad. The US and China are intensifying their trade wars with announcements of new tariffs and preparations for additional ones. President Donald Trump sought to soothe crashing stock markets by saying he has a good feeling about reaching an agreement with China, but tensions remain in the spotlight.

However, pound/dollar is mostly impacted by Brexit, with trade playing second fiddle and data falling behind. 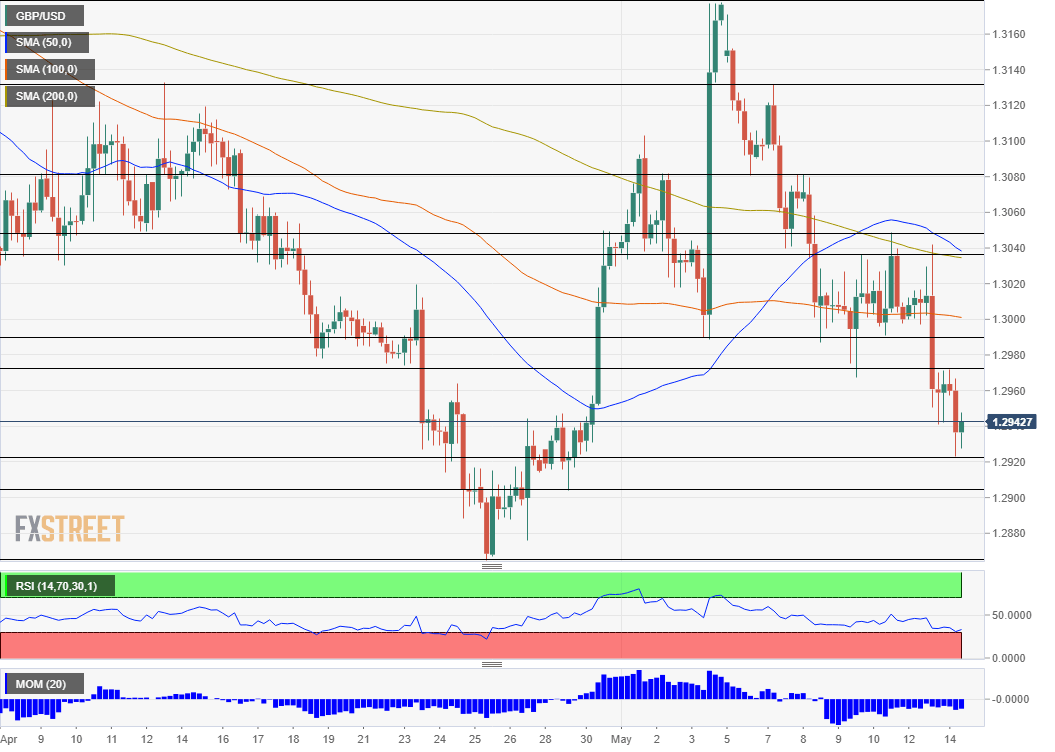 The four-hour chart shows that GBP/USD is trading below the 50, 100, and 200 Simple Moving Averages. Momentum remains to the downside while the Relative Strength Index is pointing down, while staying above 30, thus not indicating oversold conditions.

Initial resistance is at 1.2970 that held the currency pair down in recent hours. Close by, 1.2985 served as support in the previous trading range. The next levels to watch are 1.3035 and 1.3050 that held cable down beforehand.