Home » Presidential Debate Preview: Trump may lose due to his own buildup, market implications

Presidential Debate Preview: Trump may lose due to his own buildup, market implications

“Sleepy Joe” is what President Donald Trump calls his opponent and former Vice-President Joe Biden. Mocking a political opponent is common practice – yet it can also backfire. As news traders know,  low expectations from an economic indicator raise the chances of an upside surprise. In the calendar’s case, it is the consensus of economists that sets estimates and in Biden’s case, it is Trump that is lowering them – at his own peril.

Biden, whose public career spans nearly five decades, is known for his gaffes and occasional rambling on the campaign trail and when facing opponents in long debates. The president, a self-proclaimed “very stable genius” tried to undermine his rival’s mental abilities, but that smear campaign did not stick.

Trump also touts Biden – a life-long centrist chosen for his ability to appeal to moderate Republicans – as a radical leftist. That campaign did not move the dial either. National opinion polls and those in critical battleground states have shown a consistent lead for Biden. The most recent surveys from Pennsylvania show that Trump’s potential loss is beyond the margin of error:

The remarkably stable surveys still allow for a Trump victory, but also open the door to a landslide victory by the Democrats. The presidential debates – and especially the first one – are always opportunities for the underdog to narrow the deficit. This is even more important in 2020, a year marred by COVID-19, which meant fewer campaign events.

There are fewer undecided voters now in comparison to 2016, meaning that Trump has to fight hard for every vote and he will likely do everything he can in the debate. On the other hand, Biden only has to appear as calm, dismissing Trump’s blows with a smile. That may not be easy for the former VP, who can often lose his temper.

However, if Biden “lets Trump be Trump,” he may easily win the debate. By conveying a message of healing to the American public – speaking above the president’s attacks – he could swiftly be perceived as a winner, further increasing his chances of replacing Trump.

Biden has an 86% chance of winning as of September 29, according to The Economist’s model.

Trump can be easily attacked

Trump went as far as demanding a drug test from Biden, baselessly claiming that upbeat performances by his rivals were a result of the usage of illegal substances. The Democrat may suggest a drug test if the Republican publishes his tax returns.

The New York Times published details from Trump’s recent tax history showing years of massive losses and tarnishing his claim to be rich and successful. Biden, who suffered the death of his son, may better appeal to the American public after over 200,000 COVID-19 deaths.

Trump continues to play down the severity of the virus and the need to use face masks, encouraging his supporters to risk themselves and others. He also reportedly called dead soldiers losers and suckers.

Overall, low expectations from Biden’s debating skills leave room for a surprise – either by dismissing Trump or by using a long list of easy attacks.

Investors are concerned about the US economic recovery. While it has been robust at first, there are signs of leveling off after government support lapsed at the end of July. Without the $600/week federal unemployment insurance top-up and other programs, consumption fell short of estimates in August.

The death of Justice Ruth Bader-Ginsburg prompted a fierce battle between Republicans and Democrats over her replacement. With just over a month until the elections and the energy used around the nomination, the chances for new relief is falling, but markets still have some hope.

How can the debate impact stimulus? If Biden is perceived as the winner, Republicans could conclude that they must do everything to impact the Supreme Court as they would lose their chance after the election. That would further lower the chances of further relief.

In this scenario, markets would retreat, drag gold down with them, and the only winner would be the safe-haven dollar.

Conversely, if Trump wins the televised encounter and improves his chances of re-election, there is a greater probability that Senate Majority Leader Mitch McConnell and his colleagues would devote more time to boosting the economy and their chances of holding onto the upper chamber.

In this case, the greenback could fall while stocks and gold would shine.

Apart from the next stimulus bill, markets prefer certainty. Trump’s recent refusal to commit to a peaceful transition of power means that a close election could trigger a constitutional crisis and perhaps violence on the streets – an unfavorable outcome for investors. Representative Alexandra Ocasio Cortez, and Senators Bernie Sanders and Elisabeth Warren scare Wall Street.

A Biden win in the debate raises the chances for a clean sweep by Democrats, allowing left-leaning lawmakers to push their agenda, a scenario markets dread. However, an inconclusive election is worse than AOC yielding more influence, even for markets. 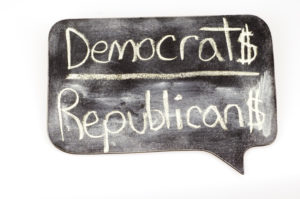 Top 3 Gainers: OMG, SXP, and STORJ explode 70% and are eying up more gains

The first presidential debate is set to shake up the elections campaign.   President Trump's playing down of challenger Biden's skills may turn into a double-edged sword. Markets will move on implications for a new fiscal relief package.   "Sleepy Joe" is what President Donald Trump calls his opponent and former Vice-President Joe Biden. Mocking a political opponent is common practice - yet it can also backfire. As news traders know,  low expectations from an economic indicator raise the chances of an upside surprise. In the calendar's case, it is the consensus of economists that sets estimates and in Biden's…