The cryptoasset is likely to contain the losses above $0.18 as long as the RSI in the daily range holds above 35. Recovery towards the average would signal possible price action above $0.1850 and $0.19 resistance zones.

Looking at the MACD in the same range, traders cannot ignore the influence sellers have over the price. The indicator is moving sidelong marginally below the midline. A minor bearish divergence highlights the bearish pressure, perhaps keeping buyers away from significant upward movement.

On the flip side, if losses continue below $0.18 as well as $0.1785, Ripple could lose any chances of recovery until it finds balance at $0.14 (primary support). Note that in March, XRP plunged to $0.11 due to the Coronavirus-triggered crash across the market. On the brighter side, a fall of such extent could increase the demand for the token and eventually catapult it above $0.20.

Resistance one: $0.1829 – The region highlights the Bollinger Band 1-hour middle curve, the Fibo 23.6% one-day, the previous high 15-minutes and the SMA 50 15-minutes indicators among others.

Support one: $0.1811 – The zone is the initial support and is home to the Bollinger band daily lower curve, SMA ten 15-minutes and the previous low 15-minutes. 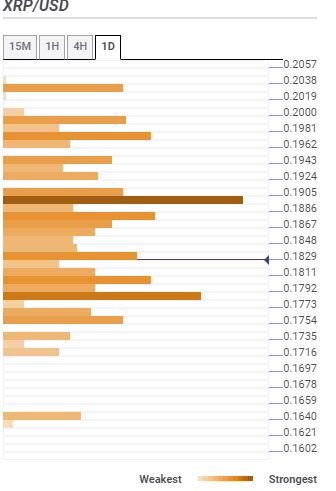