Cryptocurrencies across the board are dealing with increased selling activities. May was one of the most anticipated months of 2020 due to Bitcoin halving. Trading has been quite eventful with Bitcoin initially pulling the entire market upwards with a pre-halving rally to above $10,000. However, the rally culminated in acute losses last weekend as Bitcoin once again slumped to $8,100.

Ripple has not been spared by the rollercoaster rides in the market. After hitting highs of $0.2350 in April, the crypto plunged to $0.1750 on Sunday. A recovery has already ensued with XRP stepping above $0.20. However, as reported earlier on Friday, resistance at $0.21 has capped upward movement. At the momentum, the bulls are left with very few options: to hold above $0.20 and push for consolidation or attack the seller congestion at $0.21 in order to clear the path towards $0.30.

Global financial markets have experienced one of the worst crumbles in history. This has brought attention to cryptocurrency networks and projects. Crypto networks such as Ethereum and Bitcoin have seen a surge in activities which have already clogged the systems. Transaction fees for both ETH and BTC have soared over times. It is becoming increasingly difficult and expensive to move these assets from one exchange to another.

In particular, users of Ether are seeking an alternative in XRP, the token issued by Ripple, a leading blockchain solution provider. According to Xpring, the incubator arm of Ripple, “XRP was designed with value transfer on top of mind. It is reliable and affordable across a wide range of network loads.” The clog in Ethereum network has led to an increase in gas price and transaction fee. The graph below shows that increase in the cost of transaction in Ethereum leads to a surge in XRP cross-chain transactions. Xpring explained in a blog post:

The observed XRP transactions increase is likely a result of traders using XRP as an alternative rebalancing asset. 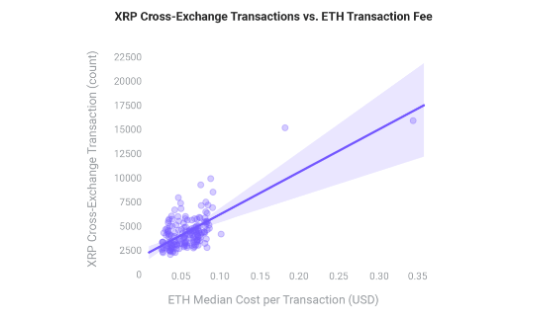 One of the reasons for XRP as the best bridging asset is the fact that the transaction fee is considerably low. Moreover, “as both Ethereum and Bitcoin fees skyrocketed, XRP fees remain at a stable level. Even though traders likely shifted to XRP for interexchange rebalancing, it did not get more expensive.”

Ripple continues to stand out among cryptoassets that continually evolve to suit users’ needs. In addition to that, the network was built to be resilient and focus on reducing the cost of sending funds anywhere in the world. It is not clear yet if this will have an impact on the price of XRP which has been struggling in comparison to major assets such as Bitcoin and Ethereum.

Is Ripple’s XRP at the center of Bitrue’s success?

According to Ripple, Singapore-based Bitrue has been experiencing great success and it all stems from having XRP at the center of the trading platform. Bitrue also says that the “low-cost, same-day cross-border transactions and XRP’s growing utility among businesses and individuals will bring more users to its exchange.” Co-founder and CEO of Bitrue, Curis Wang said in statement:

XRP’s role in solving problems with cross-border payments is a perfect use case that will drive growth, which is why Bitrue decided to make it the central asset of our exchange. In addition, our connection to XRP’s highly-engaged community differentiates us from the thousands of other exchanges out there.

Bitrue’s success could draw more exchanges towards XRP in due time. Besides, as Xpring reported users on exchanges are already shifting to Ripple to bridge between assets on the trading platforms. Wang says that “XRP’s use case makes it both practical and scalable so it made sense for our business to focus on it.”

Ripple Technical Analysis: XRP/USD to close the week above $0.20

As mentioned Ripple’s upside is capped under $0.21 while buyers are doing all they can to hold the support at $0.20. The RSI is moving a horizontally which means that sideways trading is likely in the short term. On the brighter side, the MACD shows that Ripple is in the bulls’ hands especially with the continued uptrend from last week’s low at -0.00576. A bullish divergence from the MACD signals that buyers could eventually carry the day. Consolidation above $0.20 would allow them to focus on higher levels at $0.25 and $0.30 respectively.

AUD/USD: Consolidation in the next quarter – Danske Bank

Ripple’s XRP saves crypto traders from the increased transaction fees for Bitcoin and Ethereum. Bitrue proves that adopting XRP as the base currency for exchange platforms is a smart decision. Ripple price stares into consolidation above $0.20 after selling pressure at $0.21 became a hard nut to crack. Cryptocurrencies across the board are dealing with increased selling activities. May was one of the most anticipated months of 2020 due to Bitcoin halving. Trading has been quite eventful with Bitcoin initially pulling the entire market upwards with a pre-halving rally to above $10,000. However, the rally culminated in acute losses last…