Ripple is currently in consolidation above $0.20. Therefore, there is not much that can be said in regard to this week’s price performance, except for the move that tested $0.2150 on Monday. A bearish wave that swept across the market immediately after the spike dispersed the bulls and forced XRP back to $0.20. At the time of writing, XRP/USD is trading at $0.2055. Buyers are trying their best to hold onto the bullish pressure towards $0.21. Selling pressure is, however, not non-existent hence the delayed recovery above $0.21.

The XRP Ledger (XRPL) is one of the technologies in the cryptocurrency industry that enjoys continuous development for new features and upgrades. Most upgrades and features usually require to be voted in by validators. For a feature to get the green light, it needs to get an 80% majority vote for a period of continuous two weeks.

At the moment a feature that is awaiting approval is the XRP Checks. It is not new to the network as it was first introduced with the 0.9.0 protocol upgrade in 2018. Over the years it has not managed to receive the majority vote. However, as it stands now, XRP Checks could get validated because a UNK validator removed a veto.
The Checks platform is very similar to traditional banking checks. It will allow users of XRP to send and receive funds synchronously. The check from the sender can also have an expiry date, besides it can be canceled. The funds will remain with the sender until the check is cashed out.

According to a report by Ripple, the blockchain company behind the issuance of XRP tokens found that “countries around the world are addressing the frictions inherent in the last mile by upgrading and modernizing their domestic payment schemes.” The report titled, “The Last Mile PlayBook” found that of the 195 countries, 54 are actively involved in the development of robust systems for real-time settlements of low-value transactions. Some of the countries at the forefront of developing the new financial systems supporting digital payments for Bitcoin, Ethereum, and Ripple include the United States, Brazil, Australia, Mexico, Argentina, and Colombia.

Ripple’s value has sunk by over 90% from its all-time high. The token’s performance has not been impressive in the last two years. Moreover, a top but pseudonymous analyst believes that XRP is staring into another 50% loss from current price levels. The analyst used signals from the pre-2017 fractal that detailed XRP slump by over 95% from its then local high. The analyst explains:

Clearly, the chart shows that hodling XRP is not an effective strategy.

I don’t know how anyone can argue about that. Buying when the market resets after a long deep retrace and shows strength has been a good strategy but you have to sell it. 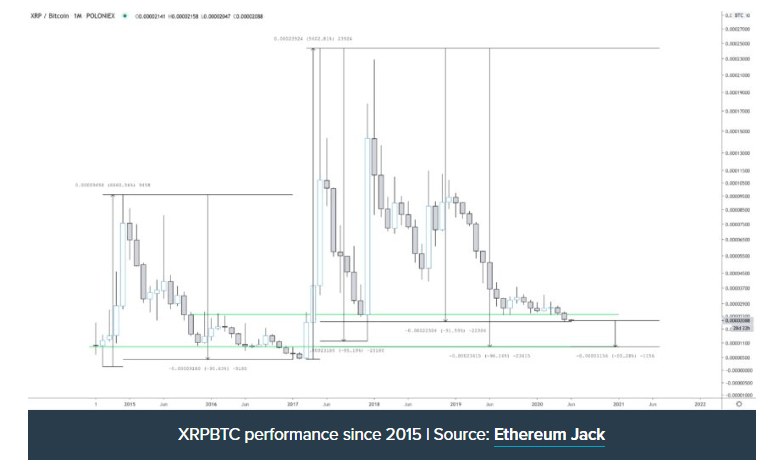 Ripple’s weekly chart shows the price trading under the moving averages. The 50 SMA is holding ground at $0.25 while the 100 SMA is at $0.3136. As the price draws closer to the 50 SMA, the potential; for growth increases. However, in the meantime, consolidation will continue, preferably above $0.19. If push comes to shove, XRP could slide to retest the support at $0.19 before spiking upwards due to the new demand at lower price levels.

The consolidation is emphasized by the RSI’s sideways action at 47 (marginally below average). A bullish divergence from the MACD confirms that buyers have more influence over the price. Unfortunately, they still lack the catalyst or momentum to sustain gains towards $0.30.

S&P 500: Second wave of coronavirus to trigger a correction

Ripple manages to hold above $0.20 after retreating from $0.2150. The XRP Ledger could soon launch traditional-like checks for synchronous funds transfer. A pseudonymous top crypto analyst believes hodling is not an effective XRP strategy. Ripple is currently in consolidation above $0.20. Therefore, there is not much that can be said in regard to this week’s price performance, except for the move that tested $0.2150 on Monday. A bearish wave that swept across the market immediately after the spike dispersed the bulls and forced XRP back to $0.20. At the time of writing, XRP/USD is trading at $0.2055. Buyers are…