Silver witnessed a modest pullback from three-week tops touched earlier this Tuesday and eroded a part of the previous day’s strong positive move.

The XAU/USD was last seen hovering near the lower end of its daily trading range, around the $27.75 region. The mentioned area marks a horizontal resistance breakpoint and is followed by support near 100-hour SMA, around the $27.40 zone.

Meanwhile, technical indicators on the 1-hourly chart have been gaining negative traction and support prospects for further weakness. That said, bullish oscillators on 4-hourly/daily charts warrant caution before positioning for a further downfall.

This makes it prudent to wait for some follow-through selling below the mentioned resistance-turned-support in order to confirm a near-term bearish bias. The XAG/USD might then turn vulnerable to break below the $27.00 round-figure mark.

The subsequent downward momentum has the potential to drag the white metal back towards the $26.15-10 intermediate support en-route monthly swing lows, around the $25.90 region touched on February 4.

On the flip side, the $28.00 mark now seems to act as an immediate resistance ahead of the $28.30-35 region (multi-week tops). A sustained move beyond should assist the XAG/USD to aim back towards reclaiming the $29.00 round-figure mark. 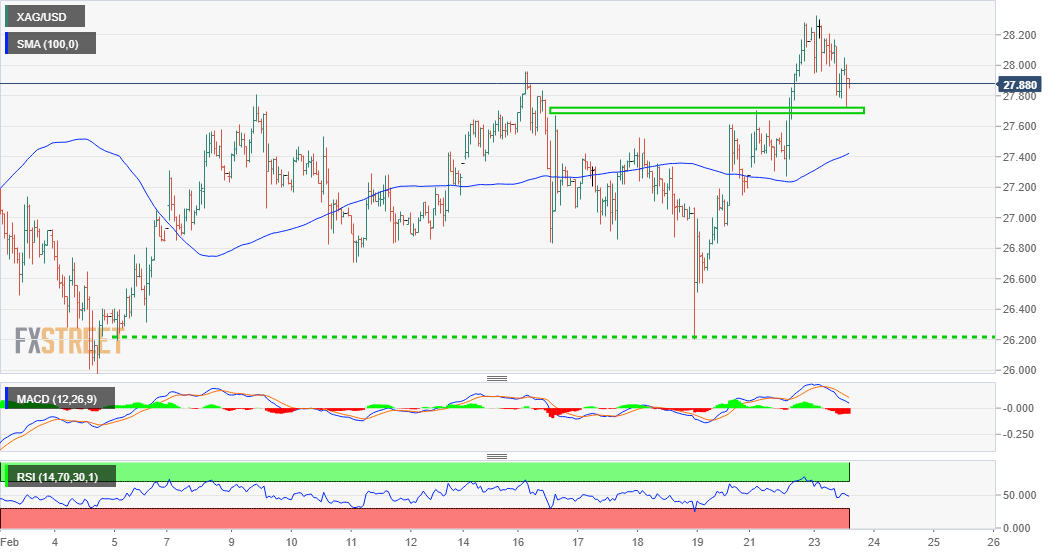