Spruce Systems are currently working on a system to bring in decentralized identifiers (DID) to the Tezos ecosystem. DIDs are one of the core components of self-sovereign identity (SSI). SSI is a movement that gives an individual complete control over their identity.

The significance of DID

In an increasingly digital world, we are creating multiple identities in multiple platforms using the same document. For instance, we have accounts in various eCommerce platforms where we have stored our social security and credit card numbers. However, what happens if one of those platforms suffers a data breach cyberattack? In that case, your credit card and social security number will be in the hands of a malicious third party.

Decentralized identifiers or DIDs can help you circumvent such risks. According to the w3c, a Decentralized Identifier, or DID, is “a globally unique identifier that does not require a centralized registration authority because it is registered with distributed ledger technology or other form of decentralized network.”

You can generate a DID specifically for a single account and control them via various cryptographic interactions. Not only can the DID be used as a universal identifier on the merchant side, but it also secures your privacy in the event of a breach, since they are not connected to a centralized registry.

Spruce Systems will be are building an identity product that will allow any XTZ holder to demonstrate their identity without compromising on privacy. They can so do by choosing “selective disclosure” in the case of verifiable presentations. Verifiable presentations are an instance in which a party is requested to present specific credentials to satisfy some information requirement. E.g., Verifying your age by showing your ID card in a bar is an example of a verifiable presentation. However, proving that you are above 21 by just showing your driver’s license and no other unnecessary information is an example of selective disclosure.

Spruce is currently working on two open-source core products – Credible and Intake. The former is a credential wallet and the latter an issuance platform, respectively. These will be the “initial building blocks for a common deployable identity infrastructure.”

This is some pretty exciting innovation. However, it doesn’t look like it has had an immediate effect on the price as XTZ/USD is going through a consolidation period. 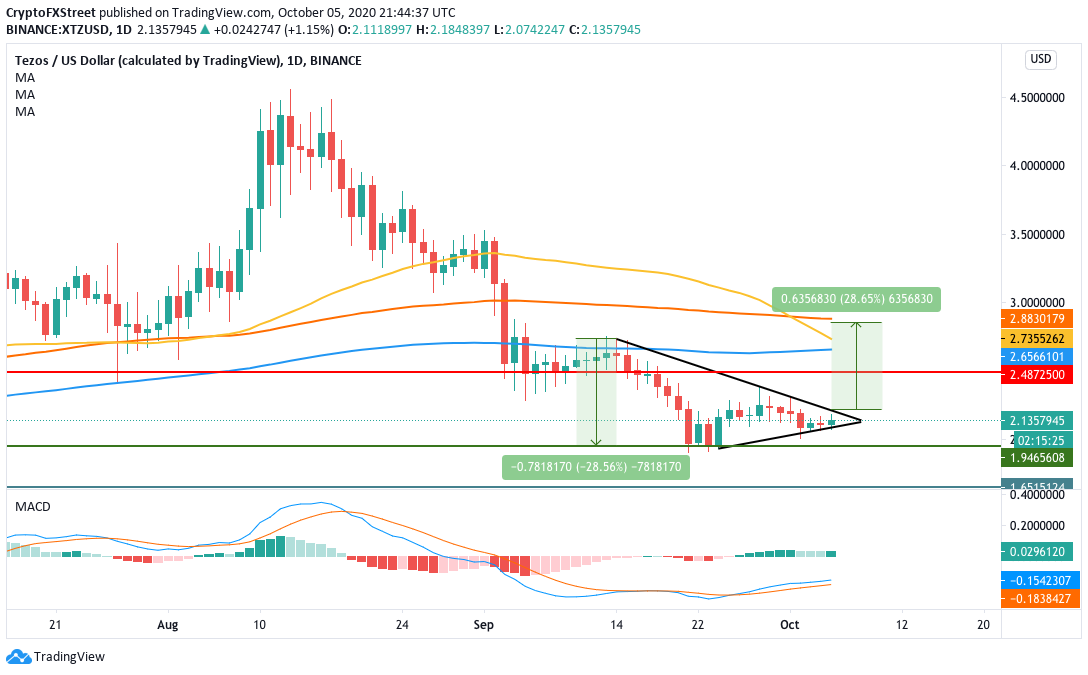 After finding support on the $1.95 support line, XTZ has been consolidating in a symmetrical triangle pattern. A symmetrical triangle pattern represents a price consolidation period before it breaks out into a bullish trend or a bearish trend. This breakout’s price target is usually equal to the distance from the high and low of the earliest part of the pattern added/subtracted to the breakout price point.

In this case, MACD shows bullish market momentum, which suggests that the price breakout will likely be bullish. If that’s the case, then it looks like XTZ will break out and reach till the 100-day SMA at $2.88. Note that the bulls must have enough momentum to break past the $2.48 resistance line and the 50-day SMA and the 200-day SMA curves for this to happen. 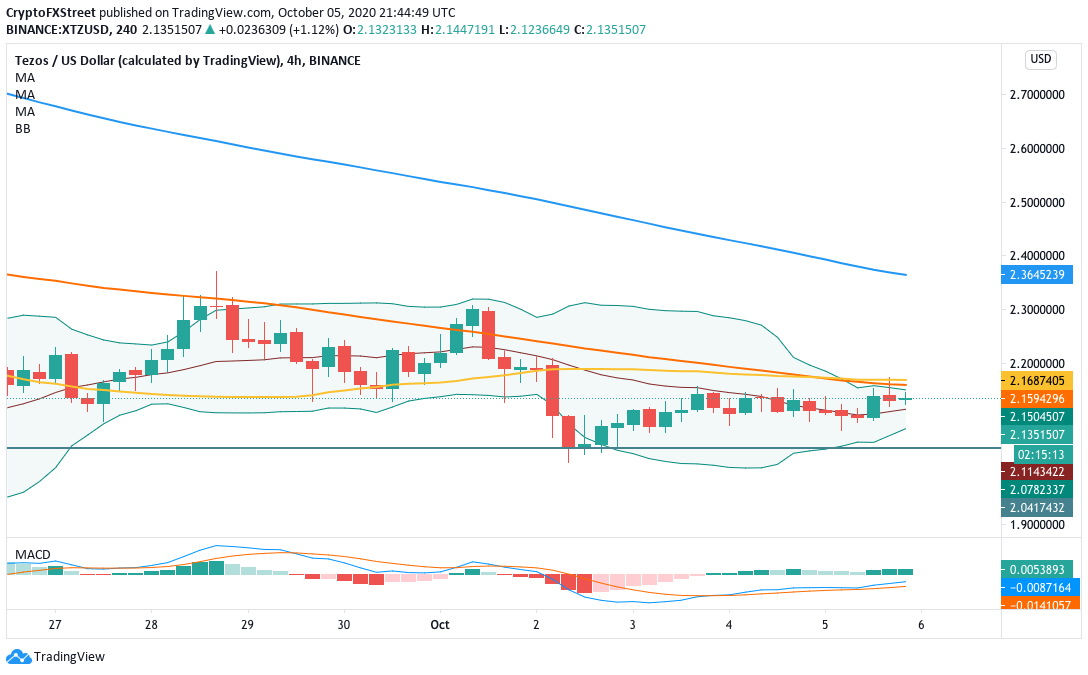 The Bollinger Bands in the 4-hour XTZ chart has started to squeeze as the “Ethereum killer” enters a consolidation period. Squeezes are indicative of low volatility periods and are usually succeeded by significant price movements. The longer the squeeze, the higher the probability of a strong breakout.

The MACD suggests that the next candlestick in the 4-hour chart will close above the upper Bollinger band. However, this thesis will be invalidated if the price gets pushed back down by the 50-four-hour SMA and the 100-four-hour SMA curves.

If this were to happens, combined with a spike in selling pressure, the next price target to watch on the downside will be the $1.95 support line. Slicing through this critical hurdle could be catastrophic for XTZ since the next significant support level sits at $1.65.

Spruce Systems are working on different products to bring in decentralized identifiers (DID) to Tezos.  XTZ is presently consolidating in a symmetrical triangle pattern in the daily chart. Spruce Systems are currently working on a system to bring in decentralized identifiers (DID) to the Tezos ecosystem. DIDs are one of the core components of self-sovereign identity (SSI). SSI is a movement that gives an individual complete control over their identity.  The significance of DID In an increasingly digital world, we are creating multiple identities in multiple platforms using the same document. For instance, we have accounts in various eCommerce platforms…