Tezos Price Prediction: XTZ at a make-or-break point after 40% crash

Tezos price shows a 40% crash to $3.5 after getting rejected by the ascending parallel channel’s upper trendline. Now, Tezos is at an inflection point that could result in a quick 45% bull rally or another brutal 35% crash.

Tezos price has been forming higher highs and higher lows since February 20. Each swing sees an approximate 200% surge from its previous swing lows. Likewise, drawdowns from these highs are about 60% to 70%. By joining these pivot points with trendlines, an ascending parallel channel forms. This pattern forecasts a bearish outlook when breached, and the target is determined by adding the channel’s height to the breakout point.

However, XTZ is still traversing the channel and is around the middle line showing a bearish bias. Supporting this pessimistic view is the SuperTrend indicator’s sell signal, flashed on February 24.

Adding credence to this is the Moving Average Convergence Divergence (MACD) indicator’s histograms developed below the zero-line.To make matters worse, the recent sell-off in Tezos price has pushed the 12 exponential moving average (EMA) below the 26 EMA, representing a bearish crossover.

Hence, a build-up of selling pressure could lead to a 35% crash towards the channel’s lower trendline at $2.2. 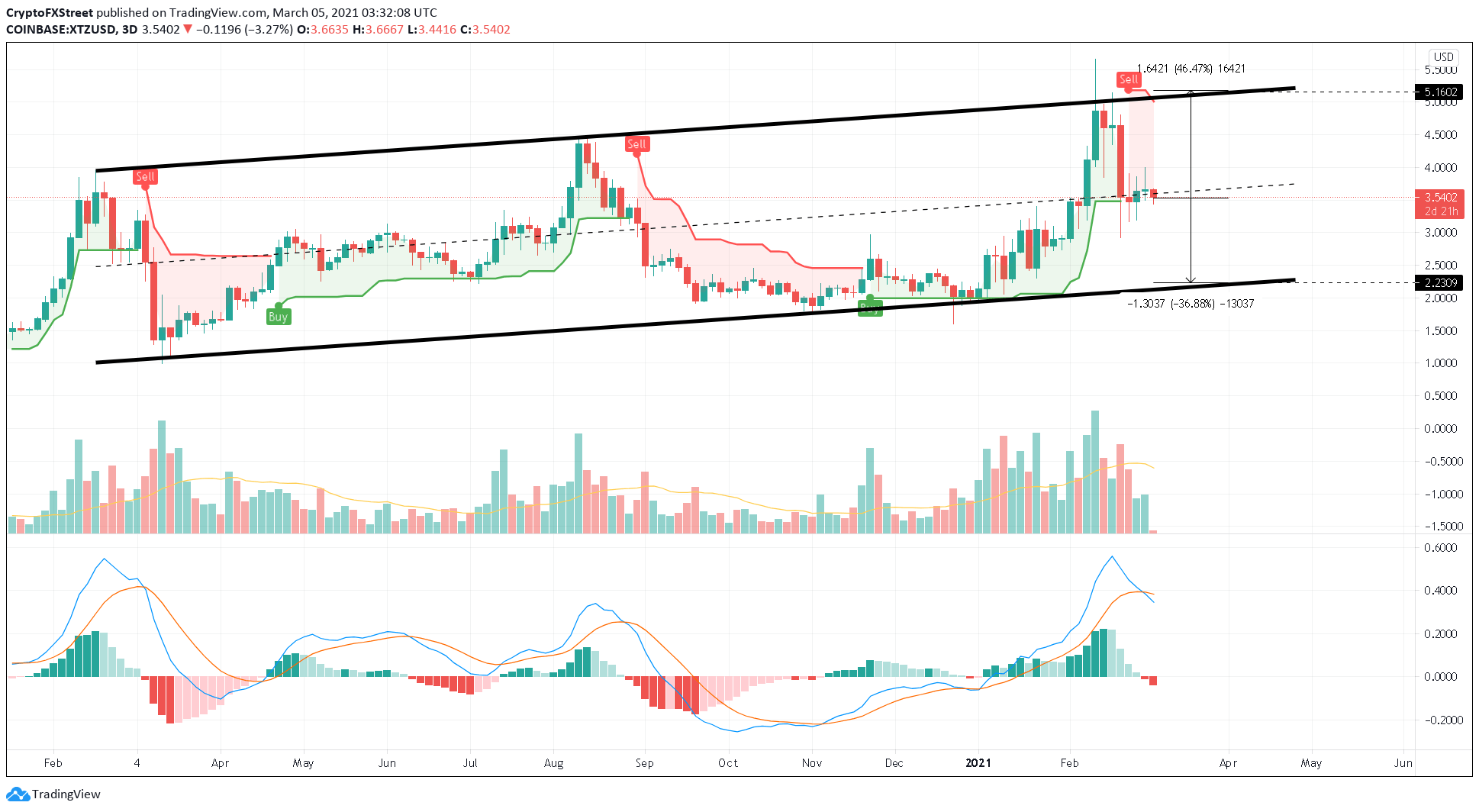 However, a decisive close above the first swing high at $3.9 could invalidate the bearish outlook and kickstart a bull rally. If this were to happen, Tezos price could surge 30% to retest the ascending channel’s upper trendline at $5.16.

Tezos price is consolidating in an ascending parallel channel on a 3-day chart. If XTZ slices through the channel's middle line, it could confirm a 35% sell-off to $2.2. However, a decisive close above $3.9 would invalidate the bearish outlook and push XTZ 30% to $5.16. Tezos price shows a 40% crash to $3.5 after getting rejected by the ascending parallel channel's upper trendline. Now, Tezos is at an inflection point that could result in a quick 45% bull rally or another brutal 35% crash. Tezos price could slide lower Tezos price has been forming higher highs and higher lows…