Home » The noose tightens on the periphery

The noose tightens on the periphery

The defeat of the incumbent socialists in Portugal’s election was of course no surprise, but nevertheless stands as another reminder of the high political price European politicians are paying (Ireland the other recent example) for pushing through the required austerity, either to avoid a bailout or to meet the conditions of one, as in Greece.  The Greek PM Papandreou remains the last man standing of the bailed-out nations, but nevertheless is facing a tough week politically as the latest austerity measures are discussed in parliament this week.  On Friday, Greece secured the next tranche of its current EU/IMF program, after nearly a month of inspections and uncertainty.  However, the experience of Ireland and Portugal for others is that doing the right thing comes with a heavy political price, but the alternative road (likely default) is just as costly, even if not immediately so. 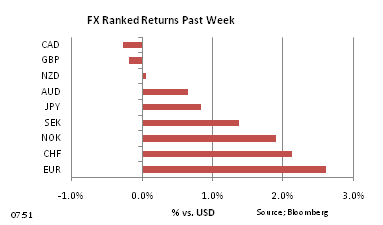 Another bailed-out leader bites the dust.  After Ireland’s election earlier this year, the Portuguese election over the weekend saw the incumbent socialists heavily defeated having presided over the failed austerity measures and EU/IMF bail-out. Former PM Socrates gives way to Coelho, who will this week work to form a government.  The main parties are all committed to the program of austerity and asset sales, so the result could be met with a sign of relief in the bond market. But tough times are still ahead for whoever is in charge.

Greece’s latest fiscal plan unlikely to get cross-party support. Under immense pressure, Greek Prime Minister Papandreou last week fleshed out a new fiscal plan, which culminated on Friday with confirmation from the EU and the IMF that the next tranche of their current bail-out package would be secured. Papandreou’s latest package is probably the best that can be done in a terrible situation. In an attempt to get this new package accepted by Parliament, Papandreou bundled the contents into one single piece of legislation. Unfortunately, some members of Papandreou’s Socialist party are not convinced he is doing the right thing and they are mounting a counter-offensive which is likely to dominate the headlines this coming week. Meanwhile, the main opposition party also remains opposed to the latest plan. Papandreou may well be doing the right thing in the circumstances, but just how binding any fiscal plan will be given the fluid state of Greek politics is likely to remain unclear for a while.

Celebration and uncertainty in Yemen. After weeks of anti-government protests, Yemen’s leader has left the country for Saudi Arabia, leading to celebrations in the streets. Whether Ali Abdullah Saleh has just gone abroad for some minor surgery or left for good appears to be up for debate right now.  If it is the latter, this would be the third leader (after Egypt and Tunisia) to be ousted by a popular uprising. Meanwhile, in Libya, there appears to be continued pressure on Gadaffi, with NATO last week having extended its mission by 90 days and the UK foreign secretary having visited the rebel-held city of Benghazi to discuss the country’s political future. Even though events are not capturing the headlines in the way they were earlier in the year, they remain significant and add a further layer of uncertainty, specifically for oil markets and to risk appetite in general.

US Payrolls – it could have been worse.  Although the headline non-farm payrolls outcome for May of 54K was well below consensus expectations, all things considered this report could have been worse. Both March and April payrolls were revised higher (by a cumulative 39K), household employment rose 105K in the month, and aggregate hours increased by almost 4% at a seasonally adjusted annual rate. For the worriers, the fact that unemployment has risen by 370K in the past two months is a cause for concern, reaffirming the upward trend in initial jobless claims evident over recent weeks. The unemployment rate has essentially averaged 9.0% so far this year (now 9.05%) – in other words, employment growth has basically matched the growth of the labour force. For the Fed, the labour market remains weaker than it would like, but at least it is not going backwards. The Fed’s extended period language is likely to remain in place for a while longer. In terms of FX implications, the greenback has lost some further ground after this report as interest rate differentials continue to move against the currency.

Aussie fails to succumb to slowdown fears. Worth noticing over the last couple of weeks is the Aussie’s ability to withstand growing concern over the apparent loss of momentum in the US economy. Indeed, over the past six weeks, the AUD has remained essentially in a tight 1.05-1.10 band. Also of interest is that the currency has not succumbed to worries about slower growth down under either. Viewed in this context, and with many traders having closed out long positions over recent weeks, the Aussie’s price action is actually fairly impressive. It certainly will do nothing but encourage the bulls.

UK economy still stuck in neutral. This week’s myriad of PMI surveys from Markit confirms what we already knew about the British economy, namely that it remains firmly stuck in neutral. The composite PMI for the month of May dropped further to 53.1, from 54.6 in the previous month. Of concern in particular is that the services PMI has fallen sharply in the last two months. Markit suggests that the growth rate for the economy for the three months to May consistent with these surveys is just 0.1%. In response, it is no surprise to see cable down once again this morning, now back below 1.63, with EUR/GBP up at 0.89. Unfortunately, the prognosis for the pound remains poor.

Can Further Weakness On Stocks Finally Support The US

The defeat of the incumbent socialists in Portugal's election was of course no surprise, but nevertheless stands as another reminder of the high political price European politicians are paying (Ireland the other recent example) for pushing through the required austerity, either to avoid a bailout or to meet the conditions of one, as in Greece.  The Greek PM Papandreou remains the last man standing of the bailed-out nations, but nevertheless is facing a tough week politically as the latest austerity measures are discussed in parliament this week.  On Friday, Greece secured the next tranche of its current EU/IMF program, after…