Home » The Vienna Initiative starts to receive the attention it

The Vienna Initiative starts to receive the attention it

Gaining traction in the myriad of debates being conducted by eurozone finance officials about how to respond to Europe’s sovereign debt crisis is the Vienna Initiative, one of the key features being where lenders to a country are encouraged to roll over existing loans and/or maturing bonds. It was this particular feature of the Vienna Initiative that was instrumental in containing the debt crisis in Eastern Europe two years ago, with lenders publicly pledging to roll over funding and support local affiliated companies. Olli Rehn, , EU Economic and Monetary Affairs Commissioner was the latest official to advocate support for this approach as part of the solution for Greece in an interview overnight. The appeal of this proposal is that there is no default or restructuring of debt – there are no haircuts, no lengthening of maturities, and no changes to the terms of existing bonds. For Greece, if such an idea were implemented, then it would buy the country time while it implemented draconian budget cuts and other structural reforms. However, it would not directly reduce Greece’s debt burden, expected to reach 160% of GDP this year and, as such, would fail to address the fundamental question concerning the country’s solvency. Although not the ECB’s preferred option, it is likely that the Vienna approach is one that would not be as vigorously opposed as the re-profiling or voluntary restructuring options were. 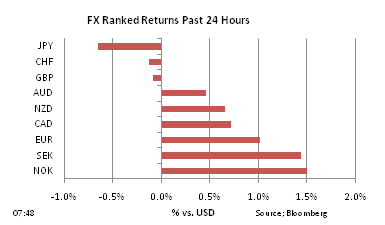 No near-term Greek debt re-profiling aids risk appetite. The sense that Germany may be backing away from its suggestion that Greek debt be re-profiled, at least in the near term, was greeted by a sense of relief across the major asset markets yesterday. The major Asian bourses were up by around 2% on Tuesday, European equity markets rose by more than 1%, the oil price was back above $116, and the single currency climbed through 1.44. The bond yields of troubled eurozone sovereigns all recovered – Greek 5-yr CDS were down almost 50bp at one stage. How long this relief lasts remains to be seen, because frankly it was never that likely that there would be a debt restructuring quite so soon. Moreover, the extremely sticky question of what to do with Greece’s non-compliance of its bailout conditions remains completely unresolved.

The current Greek government has attempted to placate growing European unrest at the lack of progress by announcing over recent days its fifth austerity package in the last 12 months. The Greek opposition, which is gaining in the polls, has rejected the latest package, and remains extremely uneasy about asset sales as well. At the same time, the IMF, the Dutch, the Germans and the Finns, are very reluctant to either stump up another aid package for their troubled member or to extend the next tranche of their bailout package because Greece seems unable to make good on its existing commitments. The IMF and EU inspectors are staying in Athens for longer than expected, in order to thrash out these issues. Greece’s debt crisis has entered a new, much more dangerous phase.

Healthy economic news for Europe’s large economies. There was more evidence yesterday of the robust recovery amongst Europe’s large economies. German unemployment fell another 8K last month, with the unemployment rate remaining unchanged at 7.0%, a 20-yr low for unified Germany. It was the 23rd consecutive month of reduced unemployment. Retail sales in Europe’s largest economy rose 3.6% YoY in April, well above expectations. In Italy, the unemployment rate fell to 8.1% in April, down from 8.3% previously. On the inflation front, there was also good news, with the eurozone CPI falling to 2.7% last month from 2.8% previously.

Sterling’s sluggishness. Ahead of critical PMI data over the course of this week, the pound struggled yesterday, significantly underperforming the resurgent euro. EUR/GBP is now at 0.8760, up more than 1% from the lows seen last Friday. The sluggishness of sterling came despite some reasonably positive news on housing. The Land Registry reported that house prices rose 0.8% in April, with prices in London up a resounding 3% in the month, while Knight Frank claimed that luxury London home prices jumped 1.4% last month after a 1% increase in April. Cable managed to clear 1.65 on the way to its highest level for a month, before drifting back to 1.6450.

Aussie stays firm despite Q1 GDP drop. An encouraging performance by the Aussie overnight, with the 1.07 level being regained despite the largest quarterly decline in output for two decades. Dragged down by the floods and a 9% decline in exports, GDP fell 1.2% in the first quarter, after a 0.8% increase in Q4 of 2010. Some local forecasters were opining that GDP could fall by as much as 2%, so in that sense this outcome was better than expected. In addition, the RBA has stated that it will put the decline in first quarter growth into context; it has also said that rates may need to rise to ensure inflationary pressures remain contained. One interesting feature of these GDP figures was the jump in the household saving ratio, now 11.5%, up from 9.7% previously.

Gaining traction in the myriad of debates being conducted by eurozone finance officials about how to respond to Europe's sovereign debt crisis is the Vienna Initiative, one of the key features being where lenders to a country are encouraged to roll over existing loans and/or maturing bonds. It was this particular feature of the Vienna Initiative that was instrumental in containing the debt crisis in Eastern Europe two years ago, with lenders publicly pledging to roll over funding and support local affiliated companies. Olli Rehn, , EU Economic and Monetary Affairs Commissioner was the latest official to advocate support for…

Yohay Elam11 years
Scroll Up
We use cookies to ensure that we give you the best experience on our website. If you continue to use this site we will assume that you are happy with it.Ok