Latest
You are at:Home»Opinions»Three reasons for GBP/USD’s downfall and levels to watch

Sterling has been unable to enjoy any solace – Bears are breaking the pound as Brexit weighs on several fronts. Here are the three straws that have broken the pound’s back.

The British Retail Consortium has reported an annual fall of 1.6% in like-for-like retail sales. The report by the industry body – that precedes the official consumption report – was expected to stand at 0%. Moreover, BRC has accompanied the report by the word “bleak” regarding the current situation and said that wage growth is not reflected at the till.

2) Contraction expected in the second quarter

After last week’s purchasing managers’ indices for June showed stagnation in the second quarter, a survey by Bloomberg took another step forward in drawing a dark picture. Economists surveyed by the media outlet are predicting the UK economy squeezed by 0.1% in the previous quarter, down from 0% in the previous poll.

Paschal Donohoe, Ireland’s finance minister has said that the prospect of a disorderly Brexit is now a “significant risk.” On the other hand, the usually calm minister remains confident that the new leadership in the EU will continue backing Ireland in the next round of Brexit talks. The pound tends to suffer when the odds of a no-deal exit are on the rise.

A few pips of the fall can also be attributed to the US dollar which is edging higher across the board. However, the moves against the euro and the yen are meager in comparison to those against the pound.

Broader markets await the all-important testimony from Fed Chair Jerome Powell on Wednesday. Powell will speak already today but is unlikely to touch on monetary policy.

Speculation about Brexit and the Fed will likely dominate price action later in the day. The Conservative leadership contest continues with both Boris Johnson and Jeremy Hunt likely to comment on Brexit – the No. 1 topic. 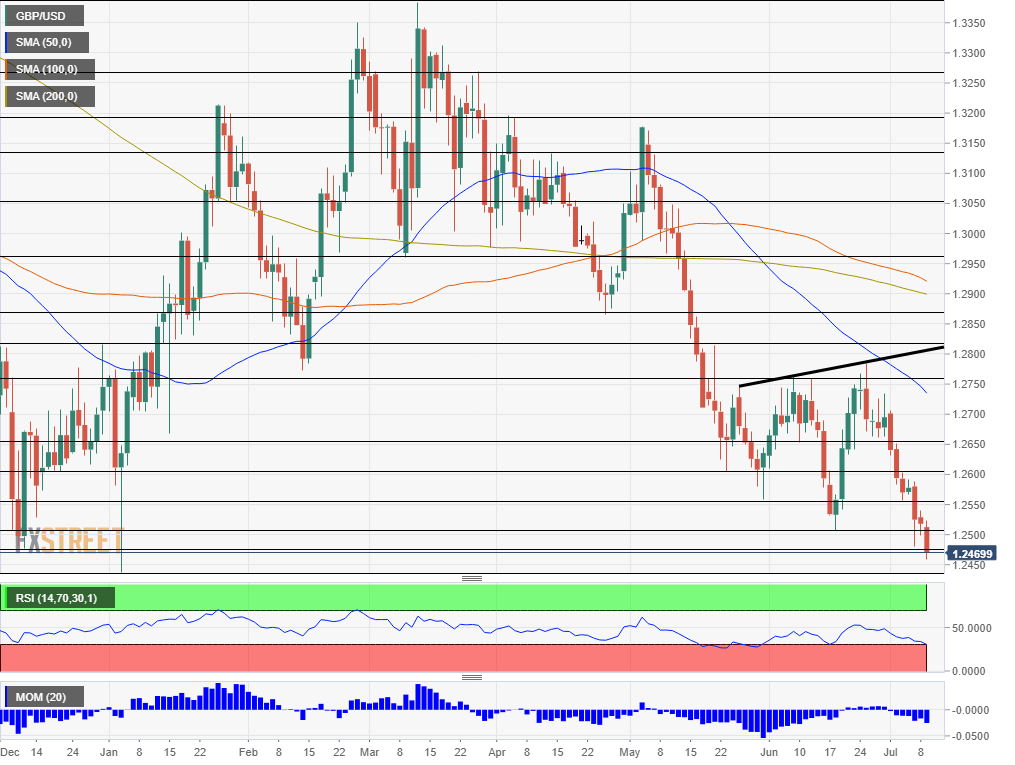 We zoom out to the daily chart given the fresh lows. The Relative Strength Index is just above 30 – currently shy of oversold conditions. Momentum remains to the downside and the pair is trading well below the 50, 100, and 200-day Simple Moving Averages.

Get the 5 most predictable currency pairs
Previous ArticleGBP/JPY technical analysis: On the verge of confirming a fresh bearish breakdown
Next Article WTI picks up fresh bid, retests $ 58 mark ahead of API data