Home » Three reasons why Cardano price could rally to $7.50

Three reasons why Cardano price could rally to $7.50

Cardano price emerged from a descending channel on May 30 on the four-hour chart, lifting ADA from below the 2018 high at $1.39 and over the 61.8% retracement of the May correction at $1.69. It was the first monthly close above the 2018 high in four attempts, establishing a firm base for future price gains.

Cardano price distinguishes itself, finishing May with double-digit returns

On May 25, Cardano price released from an inverse head-and-shoulders pattern on the four-hour chart, but it quickly faded under the weight of the broader cryptocurrency market and undercut the low of the right shoulder on May 29.

The pullback after the inverse head-and-shoulders pattern breakout forged a descending channel, reaching support around the 2018 high at $1.39 before staging a rebound through the channel’s upper trendline and above the 200 four-hour simple moving average (SMA). A level that Cardano price has respected up to today.

The significant rebound from below the 2018 low and developing consolidation puts Cardano price in a comfortable position to separate itself from the cryptocurrency complex moving forward.

The first round of resistance is at a cluster of price congestion going back to May 9, around $1.79-$1.89. Additional resistance emerges at the intersection of the 78.6% retracement of the May correction at $1.99 with the psychologically important $2.00.

With a bit of patience, Cardano price should revisit the all-time high at $2.51, returning almost 45% to investors from the current price. 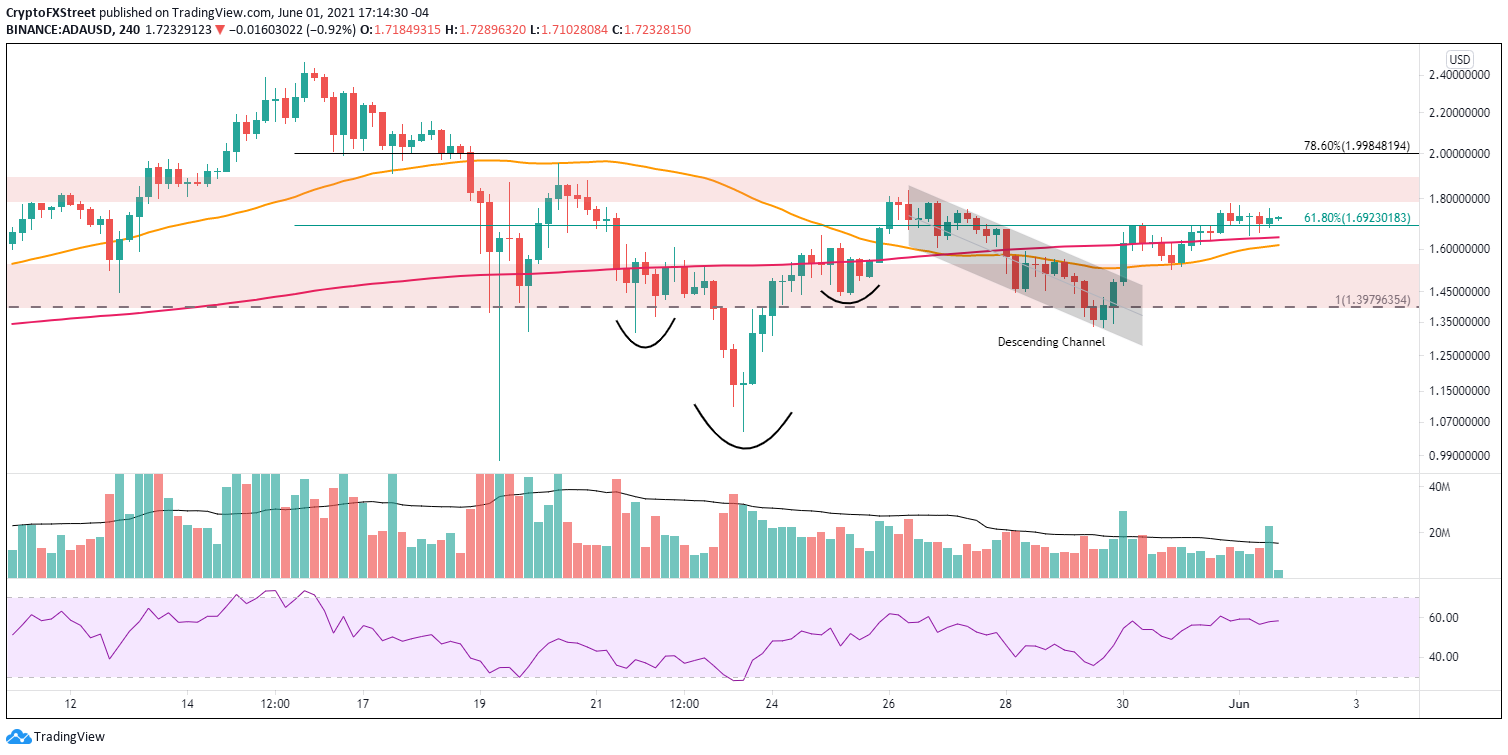 If Cardano price closes below the 2018 high on a weekly basis, it may press ADA to revisit the May 24 low at $1.23. Any further weakness would undermine the long-term bullish narrative and suggest that the digital asset is embarking on an alternative scenario that may include a new correction low.

The cryptocurrency rally off the March 2020 low into 2021 created fortunes for various investor types. Still, it also is marked by a decoupling of some altcoins from Bitcoin’s sphere of influence, particularly beginning in 2021.

One of the most notable outperformers was ADA, jumping over 700% versus BTC and confirming the end of a longstanding downtrend that began in 2018. The breakout from the cheat area of a cup completion cheat pattern in early May confirmed the transition of leadership to Cardano price.

The steep correction in May did drive the pair down to the cheat breakout level, but that was quickly erased, and the ADA/BTC pair is now near the 2021 high.

The resumption of  relative strength reflects a concentration on the compelling story for ADA, rather than just moving to whatever Bitcoin narrative carries the  day. It has established an evolution to Altcoin 2.0,    a  stage where altcoins have developed bonafide ecosystems and services that facilitate real-world solutions to some of the biggest business challenges and opportunities. Cardano is at the forefront of that evolution.

Currently, the ADA/BTC pair rests well below the all-time high printed in 2018. Still, the impulsive trajectory since the beginning of 2021 has positioned Cardano to extend the relative outperformance for the medium term.

More importantly, the May 24 report did show altcoin inflows totaling $27 million, with Cardano capturing the largest institutional inflows at $10 million. It was the second consecutive week of ADA inflows, lifting YTD inflows to $24 million for Cardano institutional investment products. Institutional investors were accumulating ADA, despite the market decline.

This week’s CoinShares Digital Asset Fund Flows Weekly Report shows another $5.2 million of inflows to Cardano institutional products. It is the third consecutive week and raises  the YTD inflows to $29 million for ADA. 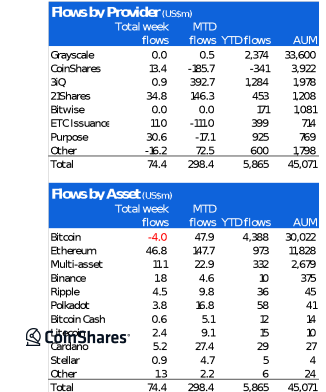 According to the CoinShares data, the rise of altcoins like Cardano indicate that institutional investors are exploring new investment frontiers beyond the bellwether cryptocurrencies and “the data suggests proof-of-stake coins remain the most popular.”

Institutional sponsorship enhances the credibility of altcoins like Cardano and offers tremendous inflows potential for the long term.

Cardano price encouraged by the rush for green tokens

Tesla’s decision to halt the acceptance of Bitcoin for payment  due to the notable impact of mining on the environment was a pivotal moment for the blockchain segment.

Elon Musk highlighted the massive energy consumption with the tweet below.

Cardano stands out as the preferred eco-friendly green coin because it was created to consume considerably less energy than Bitcoin or Ethereum. The difference lies in how the transactions are completed on the blockchain.

Alternatively, the Cardano blockchain uses an energy-efficient proof of stake consensus that only needs other holders of ADA to confirm transactions, thereby removing miner rewards, fundamental to Bitcoin. The result is a more efficient network that does not consume excess energy.

It is clear that  Cardano is well-positioned to lead and craft a better environmental future for the blockchain segment in a world governed by the pursuit of energy solutions.

To summarize, a  compelling story that emerges from the shadow of Bitcoin combined with growing institutional investor interest and a leadership position in a pivotal moment for blockchain solidifies Cardano price to deliver superior investment returns.    As a result, Cardano price should respond with a 340% rally to the 138.2% Fibonacci retracement level of the 2018-2020 bear market at $7.50 in the next year. 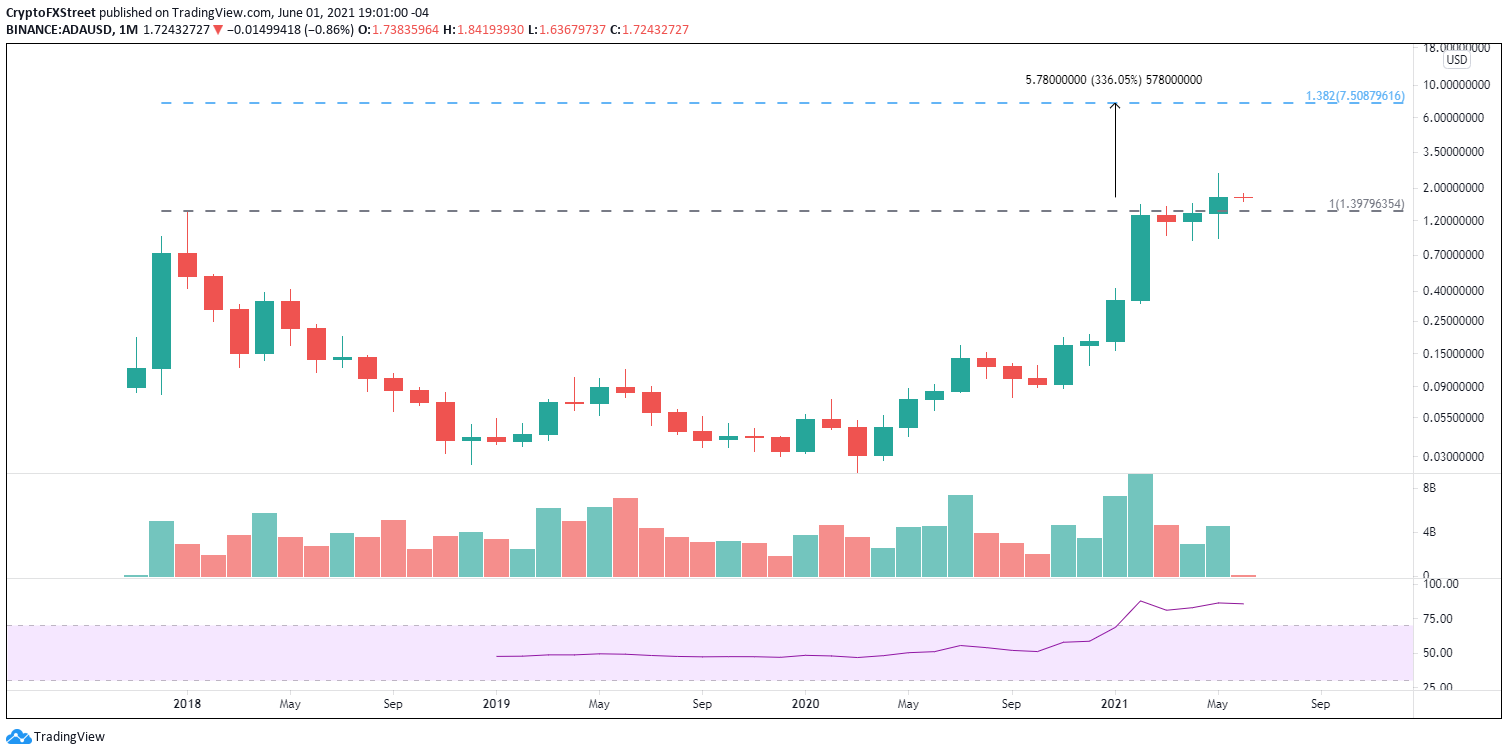 No projections are 100% certain, but when the probabilities are stacked in favor of an outcome, investors should be ready to capitalize.

Cardano price elevates ADA to the fourth-largest cryptocurrency ranked by market capitalization. 138.2% Fibonacci extension of the May 2018-2020 decline is $7.50. Cardano is an established green project positioned to lead moving forward. Cardano price emerged from a descending channel on May 30 on the four-hour chart, lifting ADA from below the 2018 high at $1.39 and over the 61.8% retracement of the May correction at $1.69. It was the first monthly close above the 2018 high in four attempts, establishing a firm base for future price gains. Cardano price distinguishes itself, finishing May with double-digit returns On May 25,…